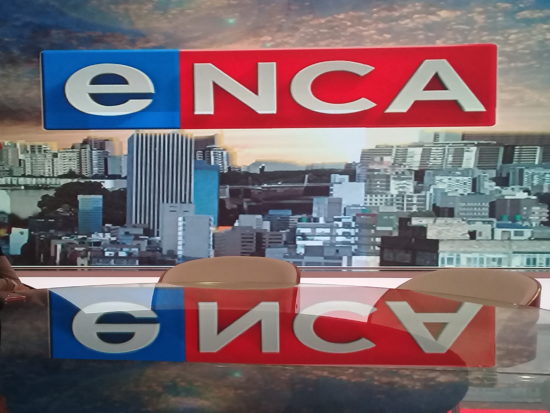 eNCA has certainly splashed the cash in the creation of its new state-of-the-art studio, which was was unveiled to much excitement at a preview event late last week.

Jeremy Maggs emceed the event, reminiscing about the launch of the 24-hour news channel. “I vividly recall weeks of tension, anxiety, raised voices followed by sheer relief and exhilaration,” he said.

“We are going to take television news into a completely new paradigm as we relaunch an entirely new programming line-up and we are at the cutting edge of our business, not just in our country but around the world. It’s technologically mind-blowing and we will entrench ourselves as the country’s most watched television channel,” he said of the channel’s future.

eNCA brought in a team of global consultants, headed up by Simon Marks, to assist with this process. They offered international insights, advice and best practice.

“What we wanted to create was an open-plan, fluid space that would give tonality for shows throughout the day,” explained Marks.

Locally the project was overseen by head of output for eNCA, Jody Jacobs, who Maggs described as “the glue that kept the process on track and stuck together”.

Mark Rosin, group chief operating officer of eMedia Investments, said  the project was the beginning of phase two of the development of eNCA. “This is the culmination of a great deal of creative work, consultative work, technical work, editorial work, good and bad tempers, and good and bad times,” he said.

With the fragmentation of television news in South Africa, and the high costs associated with television news, Rosin is often asked why eMedia Investments continues to invest in the sector as the company could get by solely on its entertainment business.

He cited two reasons. Firstly, “when news is properly told, it gives a flavour and shape to society and it can be an anchor, an authentifier and we really want to be part of that process”. Secondly, it creates jobs and contributes more to society.

Mapi Mhlangu, managing director of eNCA, revealed that audience numbers for June showed a 55.84% average viewership, followed by SABC at 28%, stressing that eNCA is the most watched news channel in the country.

She credits the station’s approach for this success. “We are the voice of the people. We uphold the Constitution and the Bill of Rights as the most important documents that inform what we do. We tell the stories of ordinary people,” she said.

Touch screens, a giant video wall, and customisable lighting are just some of the features Mhlangu believes will help eNCA stand out from the competition and allow it to remain as the market leader.

She adds that the new studio will make news more interactive and palatable for viewers who nowadays have so much choice.

Aside from the new studio, the broadcaster also refreshed its presenter line-up.

Dan Moyane and Uveka Rangappa will welcome viewers at 06:00 for eNCA Morning News Today (not broadcast from the new studio), followed by the studio’s first use at 09:00. From then until 7:00, Xoli Mngambi, Jeremy Maggs, Michelle Craig and Thulasizwe Simelane will also host news, with business insights from Devan Murugan.

eNCA News Night (17:00 – 20:00) will be anchored by Vuyo Mvoko and Cathy Mohahlana, followed by Tonight with Jane Dutton.

The day will wrap up with eNCA News Hour (from 22:00), anchored by Shahan Ramkissoon and Siki Mgabadeli.

Here are some photos from the preview event.