The woman behind Gareth Cliff: The mentor turned manager and now business partner 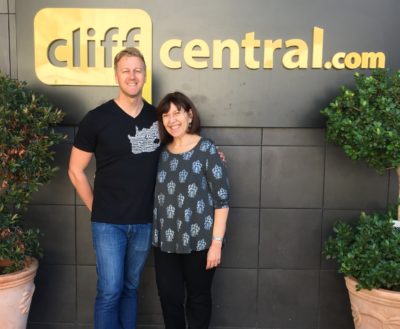 Although Rina Broomberg was not working in radio when Gareth Cliff started out, she and 702 legend, John Berks, used their industry contacts and influence to get him on radio as well as take him on as an intern.

A radio slot filled with a 20 something year old was where Cliff and the likes of Xolani Gwala got to strut their stuff.

“When I left 702, I thought it was time for Gareth to leave as well. So we got him across to 5FM and when he moved there, I promised him that I’d manage his career because I recognised that he had great potential,” says Broomberg now.

“Rina continued to manage my career; she would advise me, coach me and also handle the important decisions around bookings, endorsements and TV shows. Then we started this business [CliffCentral] together, four and a half years ago,” Cliff explains.

CliffCentral is actually a project of an umbrella company called One on One Productions, which is 15 years old already.

It was only a matter of time before Gareth was fired

The pair had always discussed the idea of CliffCentral and the migration of mainstream radio to online radio. It was happening, but in better developed countries such as the US. This was the catalyst for launching the business.

“We knew that the internet was the next big thing, we also knew that radio would reach a point where it would have to evolve,” Cliff says.

And Broomberg adds, “We had to sit on the idea because we knew it was ahead of its time and timing is everything. The SABC was getting tighter on what radio presenters could say and couldn’t say. So it was a matter of time until Gareth was fired because of his opinionated nature.”

As Cliff explains, “You’re really at their mercy, if they make a decision on something ridiculous, they can get rid of you just like that, so it was a no-brainer that we get into the streaming space.”

Dancing on a moving carpet

The idea behind Cliff Central wasn’t just about being innovative or groundbreaking, it was also about creating a platform for young and up-and-coming radio personalities.

“It was a great opportunity to open the doors for talent, something I’m really passionate about and so is Gareth, he’s learned how rewarding it is when you give young people a chance. To create skills for the next level of broadcasting and Gareth is a good teacher,” Broomberg says.

Cliff chips in: “Budgets are tighter so people who are already established have a better chance of getting TV and radio jobs. And if you start your own thing you have to weather every storm yourself, there’s no platform there to boost you or allow you to showcase your skills.”

Cliff says when they held auditions, thousands of people pitched up and they realised that there a massive need for training. “We actually gave Somizi Mhlongo and Tumi Morake their first radio gigs, not to say that we’re responsible for their success, but we certainly believed in them before everything else that came after the shows,” he says.

“We love it when our people get offers and we don’t keep them with us forever; we want them to spread their wings. We gave Tbo Touch our whole infrastructure, we rented out studios to him for six months until he left,” Broomberg adds.

She refers to their approach as “dancing on a moving carpet, because you are open to all the different outcomes and you can never be attached to the one”.

The style of the shows

“The beautiful thing about CliffCentral is that we are not a radio station, so no one wants to listen to the same thing. We have a sex show and a leadership show for example, so one is catered to a specific audience with specific content and the other is entirely different. They have options to listen to what they want,” he explains.

Shows air from 6am to 6pm, and then are looped for the rest of the time. Live auditions with different people, including their interns, were held in the spare time.

With regards to his show’s content in particular, Cliff describes how it’s like learning something new every day without paying for it.

“Tapping into the mind of a specialist is like going to a masterclass every single day and doing courses in what I want to do. Not having to pay a cent is an incredible privilege for myself and the audience, basically heaven for smart people,” Cliff explains.

Leaving while he’s ahead

The most successful entertainers in the world will tell you that the best time to quit is when you are at the top of the game. The reason being that it is a way to challenge yourself to do something even greater.

“For Gareth it was a huge risk, he left at the top of his career and I felt as his manager that it was the right time for him to leave. If you don’t take a risk you’ll never know, a scary time indeed,” Broomberg says.

When it comes to running the business with tight finances, this is no problem for the duo as they are both conservative financially. As Broomberg says, “We’re on the same page there and we run a very lean and mean machine making sure that we can pay our rent and staff every month even if we can’ pay ourselves. If we can’t afford it, we don’t get it, we don’t like debt.”