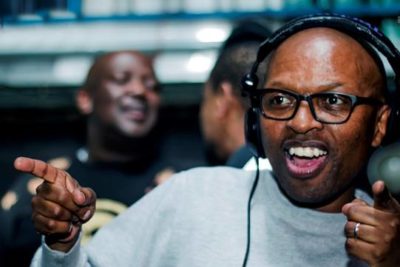 Pretoria native, Vincent Motshegoa, aka Vinny Da Vinci, is passionate about sharing his experience in the music industry, making young and naive musicians aware of the ruthless nature of the business and how reading and educating oneself can be the difference between signing a life-changing contract and signing ones life away.

What inspired the name

Vincent Motshegoa was given his initial interesting DJ name by the owner of a club he used to play at. “My name is Vincent and the owner gave me the name Leonardo. He did this to spark curiosity among club goers as to who’s this Leonardo Da Vinci playing, who also happens to be African,” Motshegoa explains.

Eventually people started calling him Leonardo Da Vinci, a name he thought was too long at the time and that had no obvious link to his birth name, Vincent. Long story short, the name was shortened to Vinny Da Vinci.

Motshegoa started DJing back in high school and he was always the designated DJ because everyone knew that he loved music and would always play it at home.

The first time he saw a DJ mix records live made such an impression on him that he decided to make friends with them, just so that he could learn how to DJ and mix records as well.

Being at the right place at the right time was what catapulted the mix master into the industry. A resident DJ at a nightclub that Motshegoa would frequent with his friends happened to not pitch on this particular Sunday. But Motshegoa was there.

His friend approached the club owner and suggested Vinny Da Vinci replace the absent resident DJ. Needless to say, Motshegoa played so well that the resident DJ got fired.

Music being his biggest passion, the producer always tries to make music a constant feature in whatever venture he decides to pursue, whether it be DJing or running a record label.

“I run a record label called House Afrika with two other partners, it’s been around since 1996. We do the A&R of music releases and now we’ve been focusing on local content and local producers,” he says.

The record label itself has been tapping into South Africa’s raw talent at a grassroots level. The latest project coming out of the stable is a compilation album produced by four young producers. The label owner always has his ear to the ground, as wherever he goes he’s always looking for new talent.

The music man hosts two radio shows, one on Metro FM called the Expensive Music Mixes and the other on DStv’s audio bouquet channel 801 called The Urban Beat, Fridays 22:00 – 01:00, co-hosted by DJ Christos.

The idea for the show came from then Metro FM station manager, Bob Mabena, who wanted a radio show that could be a representation of the house music being played across the country. The DJs @ Work, Vinny Da Vinci and DJ Christos, have been involved with house music since its introduction to South Africa so it only made sense that the pair did the show together.

The rise of social media has led to its platforms becoming one of the biggest tools for promoting brands and, in some cases, even selling products directly to consumers.

“I do my bit on social media, I won’t say I’m a guru at it or anything. I use it to promote my brand, my gigs and House Afrika, my label. Although I do see other people using it to create things like rumor mills or saying something just to get a reaction out of people, I guess it’s whatever works for you,” he shares.

The DJ has been doing a birthday tour for the past four years. It came about as a result of the demand from his fans.

“Every year I throw a party where I invite all my DJ friends to come and play with me and due to people outside of Johannesburg wanting a piece of the action, we decided to take it to them,” he explains.

“Owners from different parts of the country would call me asking if it was possible to bring the party to them. Some would even ask to buy the tour from me and I said, name your price,” he shares.

Motshegoa has been attending the DStv Delicious Food and Music Festival for the past four years, so when he got invited to be one of the performers on the Vodacom Dance Arena this year, it was a no-brainer.

“I think the festival is an amazing concept because it allows us locals to see all these international acts that we don’t normally get to see,” he says.

“My friend DJ Oskido was given the opportunity to host the entire dance arena this year and he invited all the local deejays on the line-up to come join him,” he shares.

Breaking down the genre

According to Discogs, deep house is a style of house music that blends Chicago house music, jazz-funk, and Detroit techno.

“The term deep house, I believe, is loosely used in South Africa, but no one really understands what it means. I find it hard to explain myself, but simply put, deep house is the music that Vinny Da Vinci plays,” he concludes.

The record spinner advises up-and-coming DJs to make the right decisions right at the beginning of their career.