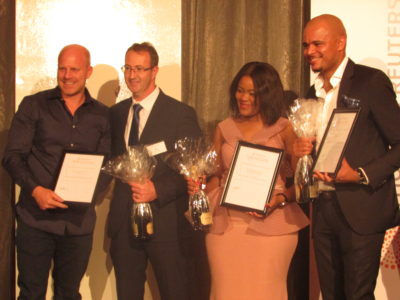 A night of glitz and glamour saw a double winner and a young team winning the Battle of the Banks at the Southern African Excellence Awards.

Hosted by Refinitiv (formerly Thomson Reuters Financial and Risk Business), the aim of the awards is to honour people who are actually doing the work on the ground, in using tech to drive financial inclusion and sustainable investment on the continent, says Sneha Shah, managing director for Africa at Refinitiv.

“As we’ve been going around Africa working with our customers, we’ve been inspired by how they bring their technology to bear to change the continent in a positive way,” she adds.

From Thomson Reuters Financial and Risk Business to Refinitiv

At the beginning of this month Thomson Reuters entered into a partnership with The Blackstone Group, which saw the latter acquiring 55% of the Financial and Risk Business. This led to the name change to Refinitiv, but the news portion of the Thomson Reuters business is not affected by the deal.

On the news side of the business, Thomson Reuters is seeing several trends, which it is taking notice of.

“There’s a trend to a much more platform-based approach to journalism where it’s no longer just a few organisations that are running most of the news sourcing for the world, but it’s a lot more organic and open. So we’ve moved to a platform-based approach, away from the traditional subscription models of buying a newsfeed, into creating content platforms where people can source and contribute to them,” says Shah.

The rise of citizen journalism is also changing the nature of media organisations, with Shah commenting, “We see our role as being able to validate information that’s coming in. We’ve done a lot of work around the idea of fake news and how on social media we can tell whether something is fake or not, and we’re using AI to do that, with advanced technology helping to filter out noise from the signal.”

She stresses that partnerships will be key in future, where traditional competitors will come together to solve important issues. Embracing emerging technologies is also important, and she believes a lot of big players will be upended by start-ups in the next 5-10 years.

Grant Locke, head of OUTvest was the big winner on the night picking up the Innovation Award, and the Embracing Technology Award.

The company created a simple platform that helps people invest, based on the assumption that those who use it have had no investment experience before.

“Consumers want to trust something, that’s the most important thing. But I don’t think that’s necessarily changed. People want to trust something, they want to engage with them, and they want to feel like they’re being looked after and that they’re the centre of the proposition. Tech doesn’t change that. Tech just makes it easier for you to serve a consumer and places less burden on them to engage with your platform,” Locke comments.

Stephen Arnold, senior bond trader at Investec, picked up the coveted People’s Choice Award, voted for on the night by attendees.

“The two other choices up for the award this evening are two highly reputable guys in the market. For me, I was blown away. Super happy that I won the prize this evening,” Arnold comments of his win.

The winners of the 2018 Battle of the Banks competition were also announced at the awards, a project that trains youngsters and gives them in-depth knowledge about the financial sector. Out of the five finalists, the Big Bank Theory team (representing FirstRand RMB South Africa) came out tops.

Here are all the winners:

The Excellence Awards will also be held in Kenya for East Africa, on 25 October and in Nigeria for West Africa, on 1 November, both for the first time this year.

Here are some photos from the awards: