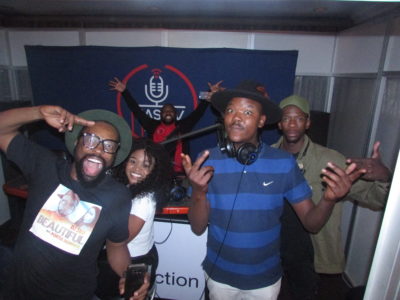 At The Media Connections’ Connected Communities event this week, there was branding for Massiv Metro everywhere, including a pop-up studio that played host to the station’s Breakfast Show that morning with DJ Sbu.

Speaking about the new partnership, Massiv Metro managing director, Tony Mallam, said as The Media Connection had a very well established track record, and that it had been selling community radio stations for years, meant it was “a natural thing” for the two companies to move towards each other. “We believe that they are going to give us a much deeper reach particularly into agencies and direct clients that we are not going to have the time or space to get to,” Mallam said.

The company now has several sales teams punting its offering to try and increase its market presence and advertising share, including an internal unit, the team at its sister company Massiv Media, digital radio specialist Awake Online, and now The Media Connection.

“They approached us from a sales perspective to say they’ve got this online platform that they really want to put out there. And they realised we’ve got the necessary presence in the agencies, with clients and the work we do with community broadcasters and one or two commercial stations. The market they are talking to is by and large the market our sales team is selling to, so there was a natural partnership and synergy,” commented Nkopane Maphiri, group CEO of Abundant Media, The Media Connection and The Brand Connection.

Massiv Metro’s DJ Sbu was one of the speakers at the event. Explaining how brands can form closer connections with consumers, he emphasised that knowing the market and the purchasers of your product/service was the most important thing.

He also stressed that, particularly in the township market, the use of products had shifted away from their intended purpose, which brands may be not aware of.

DJ Sbu also spoke about the importance of promoting entrepreneurship in South Africa, particularly for youth, and how he is trying to assist this sphere with his Hustlers Academy.

In the year and a half of operation, Massiv Metro has seen promising growth, broadcasting to 300 taxis at the start, and that number now sitting at 800. Matthew Palmer, head of sales for Massiv Metro, said this equated to 700 000 listeners a week. The station also underwent a presenter line-up review in March this year, bringing in some familiar faces for its target market.

“It’s a very authentic type of influencer. We’re not talking here about that platinum level Sandton approach. We’re talking about guys who come from the market we’re talking to and who still relate, and they still relate to this celebs … These guys are down on the ground talking to the people and they love it. We’re not talking about guys living up here with their egos, these guys don’t have egos”.

One of the challenges the station faces, perhaps indicative of the economic situation in the country as a whole (and a challenge faced by many media houses) was getting advertisers to sign up for long-term contracts, rather than short-term ones.

“Every client and campaign that comes to us is short term. We’re not seeing long-term bookings coming through. Chatting to other media owners and agencies, this seems to be the trend. Clients aren’t committing long term, they’re going campaign by campaign,” Mallam elaborated.

Massiv Metro TV was also launched in an effort to diversify the offerings, part of the company’s strategy, said Mallam.

Touching on the theme of the event, Matthew Palmer, national sales manager of Massiv Metro stressed, “For a very long time, people have been disconnected from the media types that are out there. We work in Sandton and live in Fourways and then try and sell to a community that we haven’t necessarily been in. It’s about getting people to understand that the world doesn’t revolve around the one kilometre radius around their home or office, and that South Africa is diverse.”

He advised tailoring of campaigns to meet clients’ needs, but more importantly those of consumers, as well as being open-minded.

He also punted a new approach to measuring ROI as marketing has moved away from traditional means. “People in agencies are doing more reporting than they are strategy at this stage, unfortunately. Clients have been programmed over the years to go ‘if you don’t get X Y Z report, then it wasn’t a successful campaign’. We’ve got to start looking at other ways of measuring the effective ROI or just the effective reach and understanding that consumers have of brands,” he elaborated.