Creative director sat down to write article and you’ll never believe what happened next!! [COMMENT] According to a recent study of most clickable headlines in social media, the phrases above have the highest chance of getting noticed. And if you’re wondering about my bio pic, I took some creative guidance from one of the most viewed images on Instagram ever courtesy of Kendall Jenner.

While these best practice suggestions do give us guidance around what people are clicking on, they don’t necessarily lead to better work. And there’s a strong probability that the world’s most relevant, most A/B tested, most representative, most ideal length and most well-timed piece of comms, will also be the most boring.

As a creative director, I see lots of stuff. The other day that I was shown a short film by an animation company commissioned by a big financial data firm. It promised a future where tech and humans were seamlessly woven together, harnessing efficiencies and streamlining our daily lives with the power of big data and contextually aware machines. It was a perfectly rational approach. The animation was nice. It was saying all the right things in the right order, just boringly.

And while I now know more about what the big financial firm does, it left me wondering if I want to live in a future like that.

(If you like the idea of that future, you can see it here)

It wasn’t the animation that made that future boring, I think it was because there was no risk there. All the data and analytics had made it too predictable, with no mistakes, no edge. Yet people are full of mistakes and risk and respond quite well when a brand acknowledges that. Like taking the knee during the anthem at a football game. Risky, but people really liked that. So too was the risk that Nike took to back him.

Nobody can deny the power of this piece of culture-marketing and whilst traditional wisdom would see angry Nike customers burning shoes in protest as failure, it absolutely was not. So, was this a risky snap decision by Nike to partner with Colin Kaepernick sans data or research?

Absolutely not. This was solid consumer data, and intuition making love.

What’s interesting is how a brand like Nike can harness the power of risk but use data do so in a calculated way.

According to Business Insider, around 67 percent of Nike’s customer base is younger than 35, and as a group more ethnically diverse than average. And according to a 2017 study by Edelman 60 percent of millennials are now identified as “belief-driven buyers” globally. So, Nike’s main consumer base actually has a loyalty towards companies that take a stand and disrupt the status quo. What’s more, the data also suggests that when executed correctly, this drives both purchase intent and advocacy.

Brands taking a strong point of view create polariSation and debate that immediately shows the brand has cultural voltage, but they are doing so by using data to unlock some really meaningful creativity. Data clearly is not an idea, but you can get one from it.

But finding the sweet spot between data and creativity doesn’t always have to lead to weighty, contentious activities. Spotify’s 2018 Goals campaign once again leverages their user’s embarrassing listening habits, for us all to reflect on that is fantastically light and insightful.

There’s a reason the team Anselmo Ramos and Gastón Bigio, co-founders of breakthrough agency David, and the team responsible for some of the bravest Burger King work in the last few years, have started a new independent outfit called Gut. It’s a reaction. A move to be more human. A clear signifier that some of the brightest minds in advertising still recognise the importance of a hunch.

Going with one’s gut has always been a core value at FoxP2, and recently we had the opportunity to mine behavioural insights around the ultra-cluttered life insurance category for our client Indiefin’s new campaign, where some serious data lead us to a solution that was anything but serious.

We knew that young people were generally cynical about the category and found the advertising almost invisible, with major players competing for attention by outbidding each other on search terms. The result was an entirely new model for life insurance, that rubbed up the against the category both as a product, and the way it was advertised.

I for one am pretty optimistic about a future where science helps us shift culture with an endorsement, publish embarrassing listener habits on a billboard, or sell Life Insurance with a mullet.

Evolving information tools will always be incredibly powerful, but ultimately every meaningful idea comes down to a human letting the numbers, the reporting, and the behavioural data simmer in the background, and taking an intuitive leap. This transcendence of patterns requires empathy, and awareness that don’t exist in any data set.

Ps: This 847 word article is near to the ideal word count according to a piece entitled “The ideal length of everything online, backed by research”. 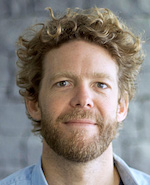 Michael Lees-Rolfe is creative director at FoxP2 Cape Town, a Dentsu Aegis Network company. In his time at FoxP2, the agency has placed in the top 10 creative rankings every year, alongside agencies over 10 times its size, while consistently topping the Small Agency table.