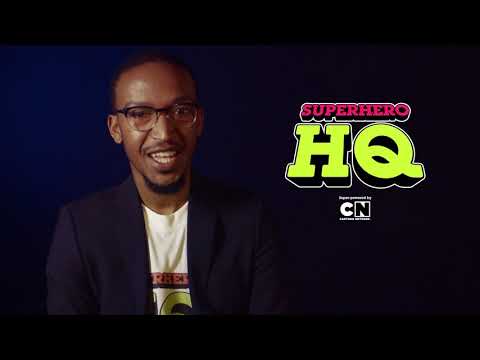 Upcoming SuperheroHQ (channel 300) will bring together various superheroes to entertain the whole family.

Brand ambassador for the pop-up channel, comedian Mojak Lehoko, is familiar with Cartoon Network and its offerings as he watched the channel as a child. So when they approached him to get involved, he jumped at the chance.

For Lehoko, the entertaining and diverse programming is a key factor in what he believes will be a successful launch of the pop-up channel on 15 March. It will bring the best animated series and movies, particularly from the DC universe, into one place.

“Often we have to search and put together our own playlists. Cartoon Network was like ‘let’s give you the most fire playlist of shows’, you can find them all in one places, they’ve been curated for you and that’s the great thing that for two weeks you know where to tune into for superheroes,” Lehoko says.

“We all want to be superheroes,” he adds. “We all wish that we could live these two lives and have our day to day and then at the end of the day, save people and the world. Superheroes are the amalgamation of all the things we aspire to, putting others before us, to have incredible capabilities and do good, and they provide hope to people.”

Lehoko names Superman and Batman as his two favourite superheroes, and believes that if the two were to go head to head with each other, then Superman would come out on top, as “the one guys got gadgets and the other one has superpowers”.

Aside from being the brand ambassador for SuperheroHQ, Lehoko also stars in a series of video shorts. He plays the role of the commissioner at SuperheroHQ, though he admits that he isn’t very good at the job, which provides a comedic twist to them.

“He’s maybe not the best guy at doing it. He’s not very good at answering the phones, sometimes calls get lost in the switchboard. And in some of them I dressed up as characters,” he explains.

These will be incorporated in-between the on-air programming, as well as used in the digital space.

“Digital allows people to disseminate information to a broader audience, who may not be sitting in front of a television. We can create awareness about the pop-up channel and the content,” he Lehoko says.

“Cartoon Network and myself live in different worlds, we exist in different spaces, and there’s an opportunity to merge those audiences with our collaboration,” he explains.

Having done a few open mic nights while at university, Lehoko officially started doing stand-up comedy in 2009. Networking and forming relationships with people in the industry has been a major factor for success for Lehoko, and he says “being funny, entertaining, charming and putting out good content” are other factors.

The power of humour and comedy? “There’s a lot of stuff going on in life and at the end of the day you need to kind of let loose and relax and good comedians provide that and people like laughing and forgetting about what’s happening day to day. It’s always a good feeling to laugh,” Lehoko responds.