The Council was originally initiated by agency founder David Ogilvy to spearhead the company’s quest for great ideas and brilliant creative thinking, for the benefit of clients. As a member of the Council, Case will help steer the international network’s creative direction alongside its Next Chapter business transformation.

Case has been integral to Ogilvy South Africa’s industry-leading creative output since joining the company in 2014 when Gloo, the specialist digital agency he founded, was acquired by Ogilvy in a significant merger for the industry.

Recently, he was recognised as one of the world’s top 10 chief creative officers in the prestigious Gunn Report. 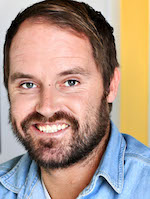 Ninety9cents (99c) Cape Town has appointed Dane Alexander as creative director of the agency’s through-the-line portfolio. He will report to executive creative director, Marius van Rensburg. Alexander makes a welcome return to the agency after leaving in 2012 to seek new challenges.

He recently returned from New York, where he held the position of associate creative director at McGaryBowen, a New York-based advertising agency, working on blue chip accounts such as United Airlines, JC Penny and Subway.

Alexander said, “It is great to see how the landscape has and continues to evolve in exciting and dynamic ways. I’m happy to be ‘home’; creating work that achieves our clients’ business objectives, as well as campaigns which our industry peers respect.” Alexander holds a Bachelor’s Degree in Visual Communication and a Higher Certificate in Web Design (AAA Advertising School).

CNN International Commercial has appointed Phil Nelson as chief operating officer (COO) to lead CNN’s operational and international growth initiatives outside of advertising sales. This includes managing and growing CNN’s relationships with over 300 digital, broadcast and out of home content partners – from local CNN branded channels to airlines and hotels that carry CNN content live and on-demand.

The new media division will support tourism agencies, airlines, cruise companies and related organisations with a platform to promote their brands and services to a global community of travellers. With an addressable audience of fifty million travellers globally, the Travelstart Media Hub aims to deliver better advertising value by capitalising on twenty years of relationships and content and community development in the travel market.

Titans find room in the team for XtraSpace 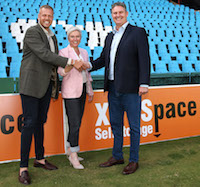 XtraSpace Self Storage has come on board as the Multiply Titan’s official storage sponsor. As part of the sponsorship, XtraSpace will have an in-stadia presence, with perimeter board advertising.

XtraSpace CEO, Colleen Mansour (middle), said, “When it comes to sponsorships, we are immensely selective. The Titans sponsorship provides a platform to further engage with our audiences in the Centurion region as well as South African cricket fans across the country.”

“It’s comforting to know that the squad will always have their needs catered for, especially for those guys who like to haul their golf bags around the country in the off-season,” says Titans CEO, Dr Jacques Faul (above right).

“It is also pleasing to know that should our various teams continue their success on the field, we will have somewhere to hold the trophies!” Faul said humorously. “On a serious note, we are especially proud to be associated with a brand that is born and bred right here, in Centurion. It speaks to exactly what we are about as a franchise.”

It’s official. Nedbank has appointed Riverbed to manage its consumer PR. The win is a testament to the agency’s ability to develop sound brand strategies with compelling creative ideas.

Nedbank’s strategy is responding to the rising societal demand for purpose-led work, something that Riverbed has always been committed to as a guiding philosophy. While Riverbed has established itself as a through-the-line creative agency, and although there’s an ever-growing convergence of disciplines, PR is attracting more prominence, particularly when driving social impact. Riverbed said it was determined to play more in this space.

After a three-way pitch, GGi Communications has been retained by Saint-Gobain as its PR agency of record. Together with the corporate mandate, the agency is handling PR and social media for Saint-Gobain’s Gyproc, Weber and Isover brands

According to Michelle Cerruti, head of brand and campaigns at Saint-Gobain, GGi’s pitch showed strategic insight and alignment to the company’s business plan, coupled with a strong account management approach.

Jennifer Stein, GGi’s MD said the relationship with Saint-Gobain had grown from an initial brief two years ago to leverage Saint-Gobain Gyproc’s Rhino brand sponsorship of SANParks to a far bigger directive incorporating the group’s leading brands alongside corporate activity.

From its humble beginnings in 1976, building steel bike frames in a Wisconsin, USA barn, Trek Bicycles is today a leader in the multi-billion dollar global cycling market.

Leyat Regev, Trek Bicycle SA’s marketing manager said: “We were looking for a creative agency that could follow a brief and add a lot of value at the same time – IMS delivered on both of these.”

Brand knowledge and understanding were also key. “IMS had also done extensive research on our brand and has an excellent understanding of it.  The fact that (some of) their team members are avid cyclists sealed the deal!

Cape Town has a new centre of excellence: HelloFCB+ The Human Connections Agency

Two of South Africa’s regularly awarded agencies, Hellocomputer Cape Town and FCB Cape Town, have come together to form a new agency, HelloFCB+. With tools to design, build and run entire customer journeys, HelloFCB+ combines technology and creativity to create strong, meaningful connections between clients and their audiences from the moment they first engage with a brand, all the way through to conversion and retention.

“This is a hugely exciting time for us and our clients as we fuse together two of the best respective agencies into one,” said Hellocomputer co-founder, Mark Tomlinson.

“By combining the skill sets of FCB Cape Town and Hellocomputer Cape Town we are now, more than ever, able to address the full spectrum of our clients’ needs across the entire customer journey. As a result, we are building even stronger bonds between our clients’ brands and their customers at each and every touchpoint,” said HelloFCB+ CCO, Mike Barnwell.

RapidLEI was launched in 2018 by Ubisecure and has been taking the world by storm through a growing network of global partners, with PBSA representing the next stage in this continued expansion. RapidLEI’s pioneering automatic LEI issuance process sees it reduced from a few days to a few minutes. With regulation mandating the use of LEIs and new use cases now benefitting from the identity assurance LEIs can offer, this G20-endorsed organisation identifier is already achieving mass adoption and shows no sign of slowing down.

PBSA, as a RapidLEI Registration Agent, will meet client demand for LEIs in South Africa, as well as offering LEIs in other regions they are expanding to, such as Europe and the USA, via their SigniFlow brand.

Caxton CTP makes sustainability a priority in its business

With almost 50 years in the industry, Caxton CTP has taken steps to ensure that all elements of their print production do not negatively affect the environment.

Caxton’s network of paper product suppliers are certified practitioners who source their paper from plantations and controlled environments. This ensures that the proper procedures have been followed in procuring the materials, but also in handling and managing by products and wastage.

There are systems in place to handle the by-products and water usage involved in the entire process from plantation to print.

Through Caxton’s deliberate and strategic partnerships with their suppliers, by-products are re-used and invested in other industries. For example, boiler ash is used as raw materials, and pith is used as soil enhancer by farmers.

In addition to users recycling paper materials in their homes, such as newspapers and boxes, Caxton’s paper suppliers have put in efforts to make sure that what they take out is put back through reforestation and replanting.

FEPE International to rebrand as World Out of Home Organization

FEPE International, the global organisation representing out of home media owners, national associations, specialist agencies and suppliers to the industry, is to rebrand as the World Out of Home Organisation.

The move, to reflect the changed nature of the Association from a European-based entity to a genuinely global body, was announced at FEPE International’s 60th Annual congress in Dubai on May 1-3.

FEPE International President Tom Goddard said: “It’s fitting that this change is announced at our 60th Annual Congress, a record-breaking event with over 400 delegates from across the world, held outside Europe.

“Moving on from FEPE is like saying goodbye to a much-loved old friend but out of home is a truly global and rapidly-changing industry in 2019 and moving from FEPE to the World Out of Home Organisation reflects these seismic changes.”

In the February release of the ABCs Quarter 4 October to December 2018, Bona effectively increased circulation by a massive 13% versus Q4 2017 and by 7% on Q3 Jul-Sep 2018. These are some amazing growth figures when the total magazine circulation declined by 8.4% on the previous quarter, and by 19.7% year-on-year. Consumer Magazines in total decreased by 3.8% in the previous quarter while the category declined by 12.4% year-on-year.

“Bona is soaring and the ABCs prove it!” said Bona’s editor, Bongiwe Tshiqi. “In fact, Bona has one of the highest circulations in the Caxton Magazine group and some of the best statistics and circulations in the Female and Family magazine categories.”

She attributed the success of the 63-year-old brand to a few factors. Most notable is the engagement and interaction between the brand and its readers, the relevance of the content and a fundamental understanding of its reader. She also adds that this due to the fact that BONA is the only magazine in the country that publishes in four different languages. – English, Zulu, Sotho and Xhosa, also plays a huge role.

“It’s imperative for me that we constantly stick by our brand promise; ‘“Be who you want to be” which celebrates the differences in SA women rather than try to confine them to one idea of beauty and success.”

Save the date: first speakers announced for Digital Media Africa