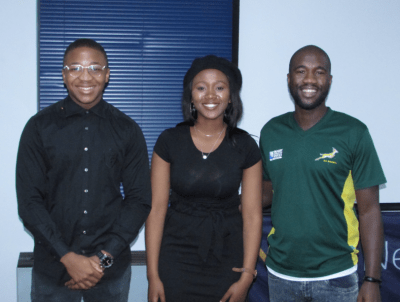 Illustrating how design thinking can be used to chart South Africa’s journey forward, seven youth shared their ideas for solving challenges the country is facing, as part of the Next Generation Circle’s (NGC) recent competition.

From the mining, manufacturing and industrial sectors to tourism, financial services and economics, the youngsters covered all sectors of South Africa, and even touched on social issues including gender based violence and crime, inequality and unemployment.

Nokwanda Zondi placed first in the competition, with her presentation on the four biggest challenges she sees South Africa facing; gender based violence and crime, education, unemployment, and a lack of economic growth.

“As South Africans we’ve been waiting for a long while for a solution from the government and it’s a solution that’s not coming now or in the near future. So I thought to take it upon myself to actually find a solution to these problems, because I mean, how long are we going to wait?” she explains.

Second place was awarded to Stan Mbatha, who proposed that a post-matric, digital literacy programme be created, as well as touched on several, proposed, local tourism initiatives.

Around the former he explains, “As soon as you step out of the exam hall on your last day of matric, you officially become an unemployed person. So why don’t we develop a programme that prepares you for seeking and finding work or entrepreneurship, but also prepares you for the fourth industrial revolution through digital skills and literacy.”

Around the latter he comments, “It’s very important for people to know and understand themselves before they go out into the world and present themselves very well. South Africa is very diverse, we have different cultures and races, but a lot of the problems we see arising is because people don’t understand each other well enough, so why don’t we start by exchanging cultures.”

“I believe in bettering the exporting economy in South Africa. If we are able to do that, it will attract more investment and that’ll be allocating more funds into different areas,” he explains.

One of the judges for the competition was broadcaster and journalist Tim Modise. He was impressed by the enthusiasm with which the youngsters tackled their presentations, but believes some of them fell short in their explanation of the practical iteration of design thinking to tackle South Africa’s problems.

Asked what he sees as the key takeaways from the presentations around challenges in the country, he replies, “The way we approach problems in South Africa is always from an interest group point of view. It is not from the practicality of it and common benefit point of view. I think if we did that, we as individuals would reap the benefits of reducing the problems that we have, especially if they benefit more people than a few people,” he stressed.

NGC is an initiative created by Plus 94 Research, in response to the plethora of issues faced by youth in South Africa, including high unemployment levels, increasing despondency and their apparent disconnect from the rest of society. It’s main aim is to give South African youth a voice and to include them in all decisions that affect them, while tapping into their resourcefulness for problem solving purposes.

“We hope that design thinking is what will get us to move from conceptualisation of ideas into activating them, into getting fruit from those ideas, tangible results, and putting our continent and country first.”

A major theme that emerged throughout the morning was a belief that Africa needs to create its own solutions, products and offerings, instead of looking at other areas of the world, adopting what they are doing/have, and then trying to fit it into the African narrative.

Moving from just a talk shop to action

The project is being driven by Tshiamo Peloeahae who is heading up the organising committee as well as being an NGC ambassador. Commenting on the event, she believes it was very successful, with a high standard of entries.

All of the ideas presented by the youngsters who participated in the competition are being compiled into a report, which will then be handed over to the relevant leaders of South Africa. This, in order to prevent this event from just being a talk shop with no action arising from it.

“We will follow up on the reports we submit to the relevant people. The whole goal is to see change. To say ‘the youth have spoken, the youth has been heard and action has been taken,” concludes Tshiamo.

Another NGC workshop will be taking place at the beginning of next year, with the date and topic to be confirmed.