LATEST NEWS
Home Out of Home Evolution of the billboard: A look at the growth of digital billboards in SA

Evolution of the billboard: A look at the growth of digital billboards in SA 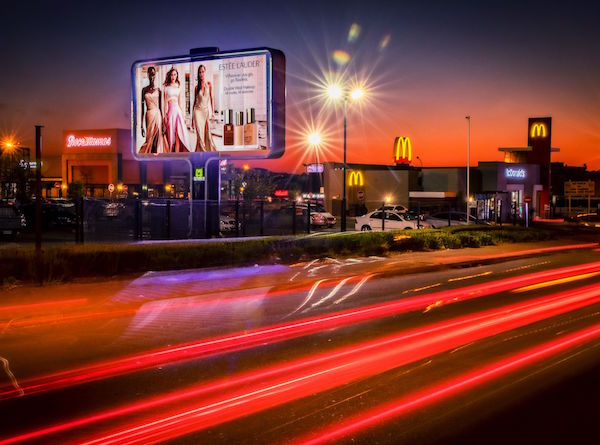 As we all know by now, the traditional billboard has evolved and we have seen a rapid expansion of digital roadside billboards in the South African urban landscape.

Around seven years ago, there were only two or three media owners in South Africa that had constructed digital billboards, and as a result they could largely dictate pricing. At the time, the billboard industry in South Africa was in the early stages of transformation following the rapid uptake and expansion of digital out of home (DOOH) globally.

Advertisers and media agencies where somewhat sceptical about this new media format. But brands supported it, appreciating the innovation and benefits on offer from DOOH. Increasing numbers of OOH media owners entered the category, resulting over time in an explosion of digital billboards being erected across a number of major South African cities.

This is not a surprise and mirrors similar trends that we see globally with digital billboards growing at 11.1% in 2019 (* Source PQ Media), nearly triple the growth rate of static or traditional OOH media.

Digital Roadside Billboards have increased from 174 sites in February 2018 to 282 in February 2020, reflecting growth of 62% over the two-year period (see graph below). What accentuates the impact of digital billboards is that close on 60% of all sites are situated within Gauteng Province, the region with the highest levels of advertiser demand.

Surprisingly, growth has not been driven by the most dominant billboard player in the industry, with JCDecaux building very few new digital roadside sites over the period. Growth has largely been driven by Alive Advertising, Primedia, Outdoor Network, Tractor Outdoor, Insight, Relativ Media and Epic Outdoor.

With the rapid growth in digital billboards, the industry has recently experienced a number of problems and certain heavy users and early adopters of the medium have elected to no longer advertise on digital roadside billboards. After some investigation into the reasons thereof, the following were some of the concerns raised:

Taking all of the above into consideration, the OOH industry has quite a few issues to consider. It can be argued however that this is part of normal “growing pains” associated with rapid growth in any industry.

What is certain though is that digital OOH mediums such a digital roadside billboards are here to stay. But why the hype and growth, and why is DOOH capturing an increasing share of advertising budgets previously allocated to television and online spend?

The following are a few very compelling reasons highlighting what digital billboards offer:

Given the above it is clear that digital billboards are here to stay and that they will grow not only in number of sites, but also in capturing a larger part of the billboard budget, both in South Africa and on the African continent.

As time passes, I predict that a lot of the issues such as reliability of data, legality of boards and trust issues will be addressed. The OMC has already formed a project team to look at global best practices regarding all the research and reporting issues related to digital billboards and will soon be launching information and interventions in this respect.

Once thing is for certain. If you are an OOH media owner and are not investing in DOOH formats, you will be left behind, particularly considering the predictions that the growth and contribution of DOOH to OOH will advance exponentially.