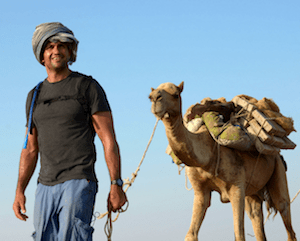 Michael Bratt spoke to Waldo Buchner and Sune Smalberger, two members of the creative team, to get some fascinating insights into the world of graphic design and animation.

The two campaigns that the Fox teams are nominated for are The Fearless Chef and Africa’s Wild Kingdom Reborn (AWKR). The local team was commissioned by National Geographic Channels International to produce digital assets and on air material and picked up nominations for best Leisure and Lifestyle Programme Spots for The Fearless Chef and Key Art/Poster for AWKR.

Buchner says the project being given to the South African team is significant because it is one of the first projects being supplied by South Africa, which is being sent to the rest of National Geographics’ areas worldwide. Buchner and Smalberger are part of the team who create additional material for Fox shows including online banners, billboards and print adverts.

The Fearless Chef focuses on taking cooking to the extreme, illustrating the adventure aspect of food. This was done by cooking in unique settings such as mountains, a hot air balloon etc. These locations were illustrated using food items. AWKR came about due to a documentary that Fox created about the revitalisation and restoration of Gorongosa National Park in Mozambique, which had been ravaged by civil war.

About this campaign, Buchner explains, “It was important to convey the nature aspect of it. Thus the dry branches used to create models of animals, which were later CGId, themselves became revitalised”.

Aside from learning about the campaigns and awards, it was fascinating to get to know Buchner and Smalberger and how they got to where they are today. Buchner is the motion graphic supervisor and has been with the Fox team for two-and-a-half years. He previously worked as a freelancer, surviving on four hours sleep many nights and says he joined Fox because he “liked the way the company approached the work”.

Fox was Smalberger’s first job out of university, and she was hired by Buchner as a junior motion graphic designer. Though Fox is not the first time they have crossed paths. Buchner lectured Smalberger once at the University of Pretoria, where he also studied. He is still a part time lecturer at the academic institution. Smalberger joined Fox as she has always been interested in movies and wanted to gain more animation experience. “There was a lot of theory at university and wanted to gain more practical experience,” she says.

When asked what attributes he credits for his success, Buchner says you have to put in the hours to succeed. These are not the first awards that he has been linked with, having won Best TV Campaign at Promax Africa’s 2013 awards, and Best Short Film at the 48 Hour Film Project in 2014. “I used to be a freelancer so I got use to putting in hours, so I usually put in more effort than is needed,” he explains. He also believes gaining experience is vital and advises to never say no to anything.

Despite his experience in graphic design and animation, Buchner wants to move into the film and directing side of things. He has already started learning, as he did a bit of this on the AWKR project, and says he does it whenever he gets the chance. Smalberger is a bit more uncertain about her future, stating, “I just want to know what I’m doing in 5 years time”.

There is a lot in the pipeline for the Fox creative team to look forward to. A new National Geographic show is coming out soon, which Buchner describes as a dramatic re-enactment series. The team will be doing behind the scenes work and teasers for it. A brand new Fox channel will be launching soon, with the team is contributing branding and the channel launch. A Funny as Fox comedy block also launched a couple of weeks ago, which the team contributed material to.

The one big challenge that Buchner sees, which affect the work of the creative team is that promoting shows in local tones is often times difficult, especially if the brief comes from the international office. Smalberger explains that the Fox branding needs to retain the international look, but at the same time most of the time it is important that the message and presentation is altered to appeal more to the South African and African audiences. National Geographic is mostly global driven, while Fox is a lot of local adaption.

Buchner adds, “Staying ahead graphically is also a challenge, staying close to the Fox brand, but being creative within those limitations. The Fox brands are very strong and try to create a seamless identity across different regions, but that’s not always possible”.

It will be interesting to see the results of the work that the Fox creative team has in the pipeline, as well as whether the team takes home the two awards they have been nominated for at the Promax BDA Awards. Representing South Africa, this six-person creative team has a lot of potential and will be one to watch.