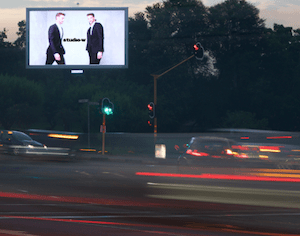 Out of home media has long been undervalued in relation to other media, simply because it is so difficult to measure. As everyone knows, marketers no longer buy media, they buy audiences, and the more a medium knows about its audience the easier it is to sell good margin inventory. With the buzz surrounding the hyper-granularity of online measurement plus ongoing improvements in broadcast media measurement, OOH has been the laggard at the back of the pack, stunting its growth prospects.

Not any more. In a decidedly radical galactic-scale stride, South Africa’s OOH industry is on the verge of a long overdue boost that will undoubtedly lead to a renaissance of sorts and a deserved seat back at the main media planning table. This is thanks to the commendable efforts of a bunch of industry stalwarts persisting for decades in their search for long-term measurement solutions, a highly ambitious and technically difficult research project and the deployment of state-of-the-art technology that rivals Google’s.

The Outdoor Measurement Council (OMC) is an industry body that in some circles is tipped to replace OHMSA. With compelling measurement tools, multiple data inputs and the major OOH media players’ support, it’s difficult not to see this eventuality. The players collaborating through the OMC to achieve this are JCDecaux, Primedia Outdoor, Ad Outpost and Outdoor Network, representing about 75% of all sites countrywide, Ask Afrika and Kuper Research, and a Spanish company called Cuende Infometrics.

The outputs will obviously be exceptionally reliable and empirical, and also fascinating. ROAD literally promises to peel the familiar layers of opaqueness in one hit to reveal a level of visibility and measurability only previously dreamt of.

The hardest and least visible part of this equation lay in compiling the travel behaviour data-sets, the donkey-work being completed by Ask Afrika and Kuper Research, with doyen Jos Kuper overseeing the project as technical head. I cannot think of anyone better qualified to complete this exacting task, without which the extrapolations are useless.

The sexiest part of this is the giant data and algorithmic smarts provided by Cuende’s big data partner, DigitalGlobe, provider of commercial high‑resolution earth imagery that owns and operates six dedicated satellites. They sell imaging data to a multitude of markets, including highly specialised four-band and multispectral imaging for mining, marine, geophysics, cartography, energy, defence, intelligence and other purposes.

This is BIG data. How big? 100 Petabytes big. To put that in perspective, Facebook’s global storage capacity is 300 Petabytes. [1 petabyte = 1 quadrillion bytes, or 10⌃14].

Not only is it big, it’s also incredibly detailed. These satellites are capable of tracking detailed human movement. They don’t (allegedly) but they do monitor and identify vehicles and their movements at a granular level. For example, Cuende measured the daily average traffic count over a 12 month period passing the mural on Johannesburg’s M1 that dissects the east and west campuses of Wits university at 1 536 969 vehicles, delivering 5 238 839 impacts.

It’s a very specific number that municipal traffic counts just can’t provide, and they can time slice it precisely, in both directions. A great example of site specific planning is an exercise done for BMW whereby the locations of all Gauteng dealerships were mapped against existing sites in the catchment areas. Fifty panels delivered an 88% reach and 2 550 GRPs. This kind of location specific targeting is highly prized, efficient and valuable to any business reliant on physical customer visits.

Most impressive of all is the algorithms that calculate the exposure to any given panel, because a site does not an advertising contact make. Given the precise angle of a panel relative to a fixed point (e.g. a street), it’s height and dimensions, the software calculates a visibility zone based on the standard optometric visual screening test. The zone is graphically represented by a circle surrounding the face of the panel and the algorithm automatically excludes positions where anything short of 20/20 visibility is possible. Thus anybody inside the circle can see and read the message clearly, which is only then counted as a contact.

The software further overlays Google maps for geospatial purposes to account for real world obstacles like buildings that partially block visibility, thus eliminating all those blind spots. It furthermore calculates orientation of the traffic in relation to the facing, so that for example a vehicle entering an intersection in a northbound orientation and passing through a north facing panel’s visibility zone will be excluded as it’s behind the eyeballs in the vehicle.

Like all things digital, this is technology in a continuous state of improvement. It isn’t perfect, to be sure, but it is a giant leap from what’s currently available. The next step under development is an exposure measure, especially relevant in high-density pedestrian and vehicular traffic zones such as place of interest, commuter points, etc. Think Trafalgar Square or Times Square, or taxi ranks in the SA context. This is the level of granularity that rivals what digital media monitoring can produce, and it should level the playing fields in the very near future.

Anyone who’s been around longer than the digital storm knows the underlying value of OOH as a medium. What ROAD will do is put it back on an equal footing with other main media, allowing the industry to extract a greater share of the advertising pie. It also injects some serious science into planning, and I expect it will reveal some fascinating insights about the movements of people.

The scope of the technology goes way beyond measuring outdoor panels. Municipalities and town planners should be first in the queue after media planners for access to this rich stream of data.