Prime time news by the numbers 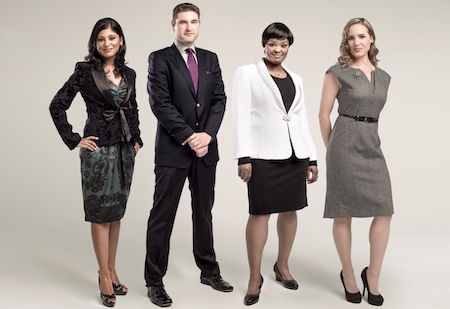 
Prime time television is often viewed as ‘must-have’ space for advertisers due to the vast audience its programming attracts. But what about prime time news? Are viewership numbers declining or increasing? We took a look at the numbers, with assistance from Deborah Schepers, chief strategy officer of PHD in Johannesburg.

The boring answer to the viewership question is that generally the numbers are neither increasing nor decreasing, and have remained fairly consistent over the past year. The channels covered included SABC 1, SABC 2, SABC 3, e.tv, eNCA and ANN7. SABC 1 showed slight upward movement, while e.tv saw a slight downward trend around the time the TAMS universe was reweighted to align with the new Establishment Survey (ES).

Schepers says that while these two adjustments are part of a bigger picture, the introduction of the ES probably played a role in these shifts. With a higher weighting efficiency than ever before, the Broadcasting Research Council of South Africa (BRC) has brought the most stable panel in decades to television viewership research in South Africa. 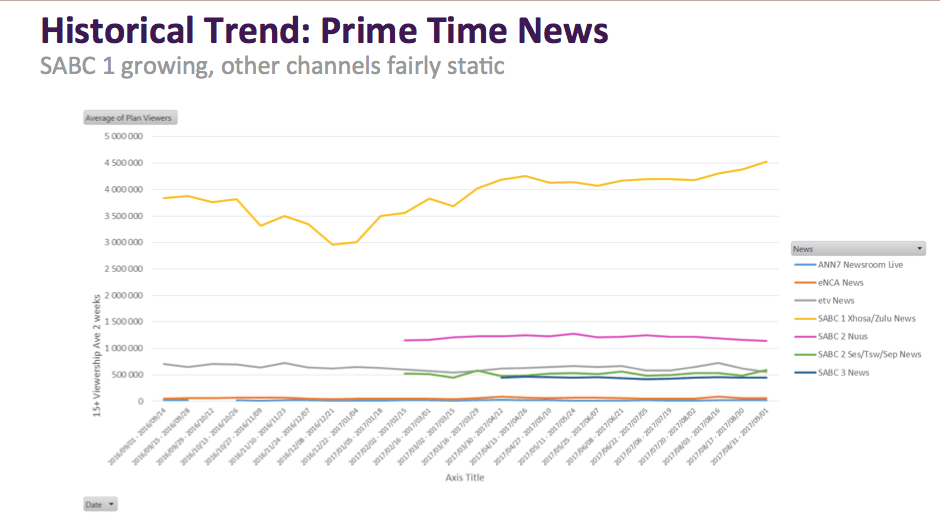 These two moves were driven by coverage of the African Cup of Nations tournament on the channel.

The prime time news on the rest of the channels that were explored remained in a consistent timeslot. However due to Afcon disruptions, the period that the tournament took place, 14 January – 5 February, has been removed from the research to retain consistency in channel comparisons.

The winners and losers

In terms of free-to-air channels, SABC 1 is miles ahead of the others in terms of number of viewers for its prime time news. An average weekday prime time news slot in August it delivered 4 336 309 adult 15+ viewers at the best rate card cost per point on offer. The viewership number is so high because the channel holds the majority of adult viewers, compared to the others. SABC 2’s Afrikaans news follows in second place, with an average of 1 178 358 adult 15+ viewers in the same period, while e.tv’s news comes third with an average of 668 164 adult 15+ viewers.

“It’s great to see these numbers … It’s great to see how strong TV still is, these are not little numbers. Something that’s fantastic in South Africa, that you can still get mass reach in one show. There certainly is fragmentation, but there’s still that potential, SABC 1’s reach is absolutely breathtaking,” says Schepers.

Here are the full results: 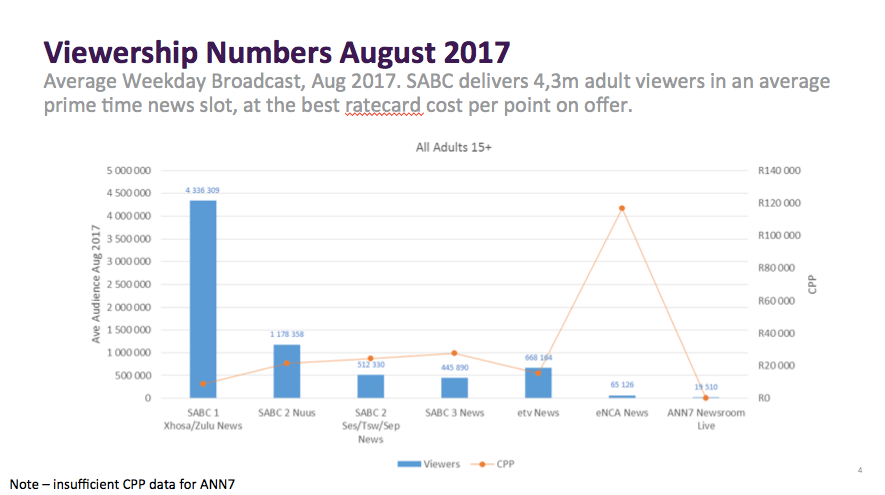 An analysis was also done of LSM 5-7 and LSM 8-10 (both 15+) for the various channels. SABC 1 attracts more of the former grouping, while eNCA performs well in the upper LSMs, with ANN7 also seeing an increase with the latter grouping. Here is the comparison of the two groupings: 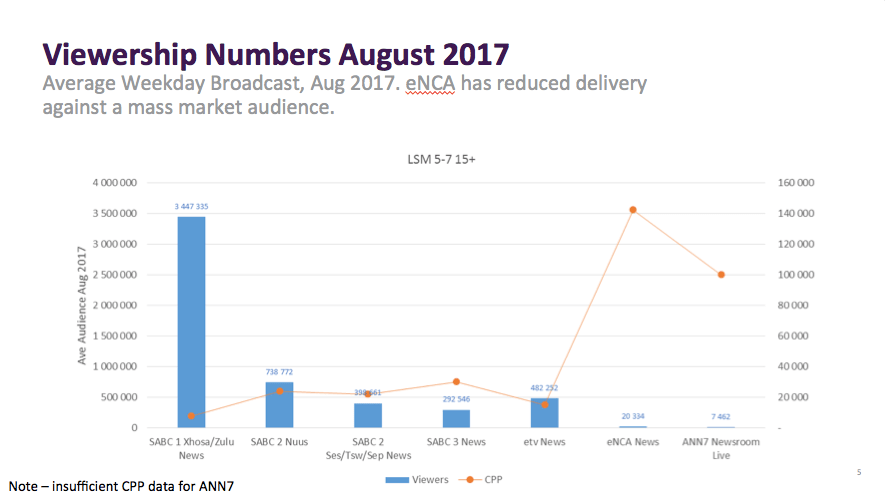 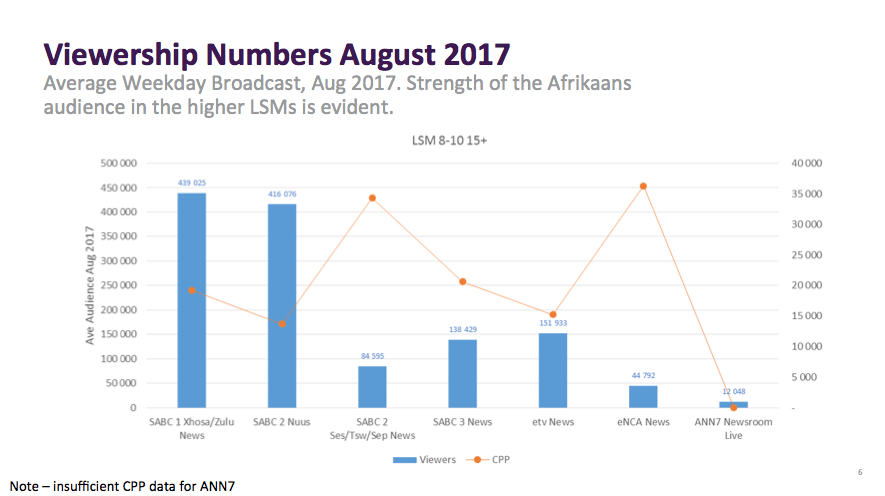 When it comes to this comparison, the finding is that news offers a more stable environment than other programming in the 18:00 – 20:30 slot as there are fewer viewership fluctuations driven by programming changes and storylines.

Viewership numbers vs. cost per point

Schepers advises that viewership numbers are probably not the factor that most media planners and buyers are looking at. “A lot of us are sitting on cost guarantees so we have to hit certain CPPs and that’s all our eye is on. The planners just sort by CPP; they are not even necessarily looking at what they are going into… So ratings are less relevant than ratings in the context of cost,” she explains.

Her main message is, “Prime time is not hugely important. We look for cost efficiency more than anything else. We’re looking for the cheapest way to buy an audience and we’re focusing on getting reach.”

Brands that associate themselves with prime time news

A lot of self-promotion of channels occurs during prime time news advertising, but it is interesting to note other brands that frequent this space. Looking at data from August, insurance company Clientele pops up heavily on SABC 1, followed by Castle Lite, Iwyze Insurance, Pep Stores, Healthy Living Alliance, and OK Bazaars.

Why prime time advertising is not effective

Schepers cites a study done by Mark Ritson of the London Business School, entitled ‘How Viewers Interact with Ads’ as a piece of research that explains why prime time advertising is not effective. Bench Marketing, a company in the Omnicom Group, sourced the study. Summarising its findings, Schepers says, “Prime time is often awful in terms of noting. Viewers’ attention to advertising is notably lower during prime time, which is an expensive day part for advertisers.

“People’s attention to adverts plummets when other people are in the room and a lot of prime time viewing is shared viewing as opposed to late-night viewing which is generally in isolation. So the most popular shows get the lowest interest in commercials and they also happen to generally be the most expensive … Prime time is never going to be an efficient buy”.

The only time that Schepers says buying will be weighted to prime time is if a product is being launched as reach is built more quickly, but reaffirms that cost efficiency will never be prime time’s strong point. She describes prime time advertising as a “vanity buy” explaining, “In certain instances it is important, less so for media than for other stakeholders who want certain people to see their advert”.

The profile of the average prime time viewer

LSM 5-7 make up most of the free-to-air channel viewership, with the Afrikaans news on SABC 2 showing a slightly higher composition of LSM 9 and 10. Here is the channel-by-channel breakdowns of the typical viewer. 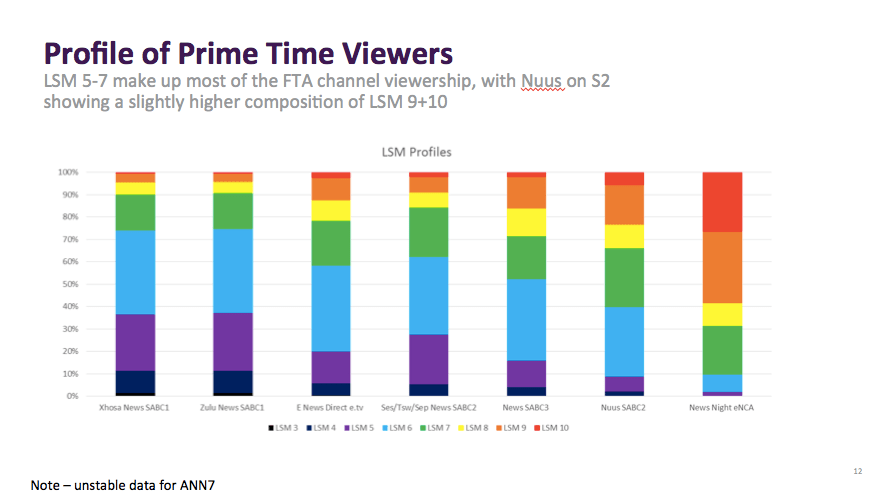 While prime time news continues to attract a stable viewership, its relevance to advertisers is very much up for debate. This time slot is not conducive to efficient cost per point ratios, something that most media planners and buyers are looking for.

All data was obtained from BRC TAMS, with assistance from Deborah Schepers of PHD.