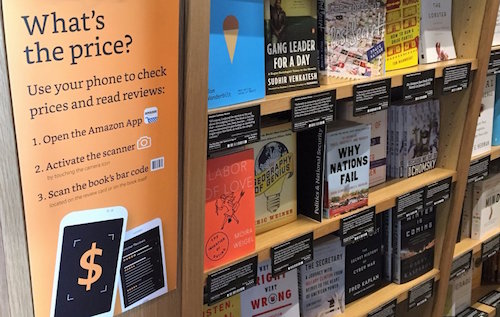 The brand retail space has changed. Once customers searched for a product, now the product has to try hard to seduce the customer. And we don’t just want to play and pay online. There’s a new phygital consumer who demands both a digital and physical brand experience.

Retail futurist, Howard Saunders, whose talk The Future is Scary inspired this article, explains the shift: “Ultimately, we are an innately social species that craves community, human contact and engaging spaces.”

E-commerce brands are introducing bricks and mortar stores. Most famously; the Amazon Book store. The first one in NYC is a cool 4 000 square feet with 3 000 books on the shelves. Among its phygital marketing strengths are arranging the books according to data, Good Reads recommendations and Prime Member discounts. Plus, while you’re there you’ll get sidetracked by the Amazon electronics on sale.

Digitalist KRS Jamwal, summarises where we’re going with phygital: “The second wave of digital will be ‘phygital’—a combination of physical and digital, commonly called ‘omnichannel.’” Online brands are flexing their muscles in the real world.  There are growing examples of this. Forbes.com, calls Warby Parker the “Poster Child for the Store of the Future” and it’s one of the most interesting retailers to embrace the “clicks and bricks” trend.  Plus the Google Pop-Up stores, which opened their domes on 19 October. Now you can Daydream in their virtual reality station, for real.

But predicting our South African phygital future has a lot to do with the retail environment. Do we want more bricks and mortar shops locally? According to the South African Council of Shopping Centres (SACSC), yes we do. Despite the economic downturn, “South African retail property has outperformed the global retail property total return index for all but two of the last 16 years.”

South Africa is among the top performing global markets in the retail sector. In the last 10 years (measured up to December 2016) South Africa and Hong Kong were the only two countries in the world that delivered double digit total returns on retail property, followed by Canada at 9.8% and Singapore at 9.2%.

So it seems that in terms of retail, South Africa has the space for brands to transition into the phygital playground, it’s a matter of striking soon and getting help from experienced omni-channel marketers. In the words of Paul Greenberg, founder of the NORA network; “Online is a great place to start a business. Perhaps the only place… But it’s not a great place to get stuck.”