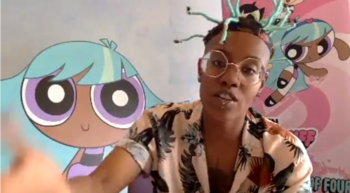 Flanked by a backdrop of Powerpuff Girls posters and sporting partially-braided blue hair, Toya Delazy was in a relaxed mood during her recent Facebook Live chat.

In the just under 30 minute conversation, titled ‘Yo let’s chat African Powerpuff Girl!’, Delazy explained more about the new episode of the cartoon featuring the character she voices, Bliss (the episode aired this past Saturday), and frequently referred to girl empowerment.

Of course, there was the promo not to the Cartoon Network, including that it “reaches more homes in the world than any other channel”, and that she was a fan of the channel growing up, watching programmes like the Powerpuff Girls, Dexter’s Laboratory, I Am Weasel, and Johnny Bravo.

“I’ve grown up but I still love cartoons… This is an extension of my young brain,” said Delazy.

“2018 marks the 20th anniversary of the Powerpuff Girls. This means 20 years of girls being encouraged to be kickass and awesome and go out there and do their thing,” she added.

She said Cartoon Network and the Powerpuff Girls had opened conversations, whether intentionally or unintentionally, around diversity, disability, and Africa growing in the cartoon space.

Aside from discussing the Powerpuff Girls, Delazy also told her audience about Cartoon Network Live, a stage show featuring all of Cartoon Network’s favourite characters, which is running from 26 June to 1 July in Cape Town, and 3 – 8 July in Johannesburg – while kids are on holiday.

During the stream, Delazy answered some viewer questions. Her advice to young South Africans who are aspiring singers? “Be prepared that it’s going to be a lot of work. But be original, don’t be afraid to have your own flavour.”

She also stressed that people should believe in themselves and chase their dreams. Getting paid for the first time while busking in Durban was a major inspiration for Delazy. “Everyone has their own power factor, which makes them unique and special, they just have to show it,” she explained.

Continuous questions arose about her pick of favourite Powerpuff Girl. Initially refusing to respond, as she didn’t want to hurt any of her ‘sisters’’ feelings, Delazy eventually said, “I love them all. They’ve all got a special pocket in my heart, because of what they represent.

“Buttercup is the tomboy and I identify with her because I’ve got the tomboy vibe too. Blossom is the leader, the grown-up but she’s still young, but she feels contained. And Bubbles is just cute, but she’ll hit a monster. Her lesson is you can be a nice person, but don’t let people step on your toes.”

From theme song to character voicing

Delazy’s involvement with the Powerpuff Girls starts in April 2016, when she sang and recorded a new theme song for the local version of the show. In 2017 the show introduced Bliss, “the first black Powerpuff Girl”, Delazy excitedly shouted, a character she voiced.

The chat garnered over 2 300 views and not just from South Africa; many came from as far afield as Angola, Zambia and France. The Facebook Live platform is impressive, providing a quality live stream with no buffering or signal interference. It’s interactive nature allows people to reach celebrities in a casual, conversation way, something that Delazy demonstrated very well. More celebrities should make use of this platform to engage with their fans and those interest in the projects they are involved in.