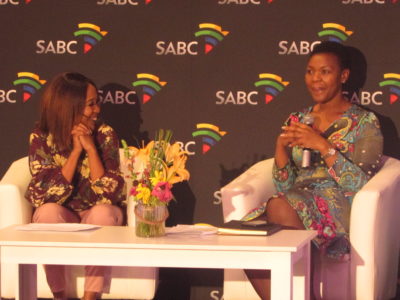 “I’m not running a political branch at SABC. I don’t account to politicians, government agencies, government; we are not the mouthpiece of the government and we have to make that clear.”

The bold message from new SABC group executive for news and current affairs, Phathiswa Magopeni, will no doubt be good news for those who’ve long hoped the public broadcaster would distance itself from the Hlaudi Motsoeneng years when the country could be forgiven for believing it was a state broadcaster.

At an event hosted by the SABC this week, Magopeni described news as the “heart and soul of the SABC brand”, adding, “If anything goes wrong in that division, the entire SABC brand goes down.

“Every decision that has been made in that division, you have to think about that, if the process goes wrong, it’s a problem for the whole brand, not just the news division.”

Asked by event emcee, Dione Ranaka, why she joined the public broadcaster, especially since it has been going through such turbulent times, Magopeni matter of factly answered: “Because of the South African citizen. It’s one thing to be comfortable in the private sector but our institutions need intervention. We can’t be sitting with the skills that we have in the private sector ignoring the needs of the South African citizen, because that’s basically what we’re doing”.

She also revealed that she is very happy that no political party is currently happy with SABC News, because that means the team is doing their job right, through independent, impartial reporting.

Magopeni was speaking at a women only celebration event, hosted by SABC, at the Hilton Hotel in Sandton.

The gathering started with entertainment provided by violinist Davina Gordon.

A self-written poem about the strength of women, entitled ‘I will rise’ was then presented by SABC PR trade marketing officer, Zongezile Mgcina.

Ranaka then got all the women on their feet, dancing and partying up a storm to Whitney Houston’s classic, ‘I’m every woman’.

She then conducted an interview with Magopeni, who discussed her career, her advice to women in the corporate world, and

Magopeni explained how journalism found her while she was still studying at the University of Cape Town, where she joined the SABC as a freelancer. She then made the switch to e.tv, and was instrumental in setting up the company’s isiZulu news offering on its Openview platform. She returned to the public broadcaster in a management role, as opposed to the content contribution side.

Her message for women

Magopeni also shared advice on being a woman working in the corporate space, and particularly the media industry.

“Women are still treated as tourists and visitors in these spaces. We have to play the rules of the game that are set up by men as we get invited to their spaces … Women need to claim their space … At what point are we going to assert ourselves and our space and use our agency to control our destiny? Don’t expect men to invite you to their space,” she commented.

She cited a new study by WAN-IFRA, which highlighted that only 17% of top management positions in the world’s 100 largest media companies are occupied by women.

“Women only constitute 24% of the content of news. We are invisible, so we need to create more spaces and make women more visible and audible,” she added.

Magopeni also told a personal story of how she came from a home with a very patriarchal father who wanted to marry her off when she was still in university. She left home for two years in order to get away from that situation.

The overarching hashtag for the event was a powerful one, #pressforprogress, emphasising that more needs to be done to promote inclusivity for women in media.