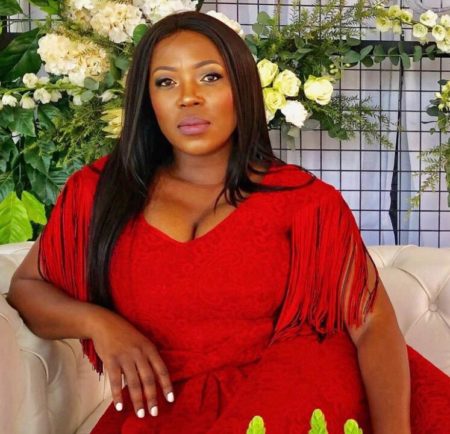 Chuene currently appears on Mzansi Magic’s The Queen, portraying the character Gracious. Before that she was a part of Harvest, Muvhango, Scandal, Backstage, and Justice for All, just to name a few. Chuene says she is very different from Gracious and in fact would never be her friend. “She is too loud, so out there, too blunt, a bit insensitive, she means well but it always comes across in a very different way. She is crazy,” she says.

Since she was nine years old, Chuene has known she wanted to get into the entertainment industry, whether it be acting, music or theatre.

Radio is not unfamiliar to her as well. Before bagging her current show on Thobela FM, she co-hosted a slot, BeLighted on CliffCentral, with Romeo Mabasa.

Asked about the differences between an online radio platform (CliffCentral) and a terrestrial radio platform (Thobela FM), Chuene says the latter has a wider audience, while the demographics are different between the two.

She has always loved radio and it gives her the opportunity to “have a voice, express myself and touch people’s lives”. She cites it as a powerful medium, as more households have radios than televisions, mostly due to affordability. “Radio brings families together. For me, it’s all about community and everyday lives,” says Chuene.

“Sometimes when you live TV lives, it makes you ‘untouchable’ for lack of a better word, but radio brings you back to engaging with people, they actually get to talk to you, whereas with TV you are talking to them as a character,” she explains.

More to jazz than simply the blues

Chuene aims to bring an educational aspect to her radio presenting, providing background information, context and history to the music, rather than just simply announcing song names and artists and linking songs together.

“People think there’s only traditional jazz, but there’s different styles, dynamics and dialects of what jazz music is perceived to be. What people don’t know is that jazz is very African, they think it’s only New Orleans American jazz,” she explains.

She stresses that there are many types of jazz and there are many Africans who perform this type of music and have collaborated with the world’s best.

Chuene’s passion for the music genre shines through brightly and her background assists her in her educating endeavour, as she previously studied jazz at Technicon and has actually released a jazz album. “Jazz is such a mix of emotions … It tells of a time, events, an era and you can make a connection with times before.”

Chuene’s show is one of the fastest growing shows in terms of listeners on Thobela FM, illustrating the great reception the show has received. The station’s audience has evolved, seeing an influx of new tech-savvy people who are on point with the latest trends. Connections via social media and streaming have also attracted an audience from outside of Limpopo.

Many people these days argue that radio stations are merely looking for celebrities to host shows (presumably as they bring their followers with them to the station), and not true radio presenters.

Indeed there was scepticism when Chuene was announced as a new presenter on Thobela FM, particularly on social media where people were constantly asking how she got the show.

“With me it was ‘oh it’s another celebrity coming to do a radio show, a jazz show, she’s not even a DJ’. I was glad when I started that that whole thing was cast to the side, as I showed I know what I’m doing and I’m passionate about what I’m doing, being a jazz person myself … I’m not just a familiar face that got a radio spot, it’s a passion thing”.

Being an actress has helped her with her radio presenting, as with both cases it’s about the audience. She has to ensure she is on their level and be relatable to them. “There is a style of speaking and delivery that can make you or break you, and that is what I have learnt as a performer,” she adds.

“With TV, it’s very easy to act silently. You have facial expressions, hand gestures and body language. But with radio you have to vocalise everything and paint a picture with the power of your voice. It must be able to engage a listener so they can imagine and engage and be plugged into the radio programme, and so you can get into their mind so their imaginations can be ignited,” she explains.

A huge supporter of vernacular language

“Most of the work that I’ve got, I got because I speak Sepedi. It is not only in the ‘hong hong hong’. When we were growing up, people would get embarrassed of where they came from. They came to Johannesburg and people would laugh at you because you sound wrong, and then they would only speak English … Maybe the secret to your success lies in your vernacular language, not English. I am where I am, because I didn’t undermine the language that I have”.

“Anyone can speak English. Someone who speaks their mother tongue eloquently, fluently and with pride, it’s just a handful,” she adds.

Advice for the youth

Chuene urges youngsters to complete their education (at least to matric), providing a solid base for any career they want to pursue, as well as constant reading to gain knowledge. Once they have picked what they want to do, she encourages them to learn as much as they can about the craft, including its history, technicalities, and the practical side of it.

She also reminds youngsters that they don’t necessarily need to be in the spotlight to be successful. Behind the scenes players, like Diane Warren, are the “real spotlight holders” and they knew where there strengths lie. “People should stop being obsessed with being in the spotlight. They should worry about creating the spotlight for others … Sometimes focusing on being in front of the camera makes us blind to the other possibilities that can make us great,” she stresses.

Describing herself as an all-round performer, work keeps her very busy, as apart from her radio and television duties, she is a voice over artist, published author, emcee, and motivational speaker.

When asked how she balances her life, with work and home, Chuene jokingly replies, “I don’t, I just run around like a headless chicken and somehow it all comes together”.

Less sleep and a strong family support structure helps her cope with all the work, but she wouldn’t change any of it believing, “With the entertainment industry, when opportunities strike, you take all of them as much as possible, so that when it all dries out, you are not left as a bitter human being, you are left with a heart full of gratitude”.

What’s next for Rami Chuene?

Chuene has set her sights on international films, and says that what she does next “needs to be bigger and bolder” than her previous endeavours. She also wants to continue to be a role model for youngsters, particularly women, and assist in the promotion of them as they are the future.