The amount of time Americans spend with media has continued to increase, largely the result of the widespread connectivity and available content platforms, Nielsen reported this week. In just the few months since the end of the third quarter of last year, US consumers 18 and older increased their time with media by more than a full half hour.

“Where are we finding the time, and which platforms are driving us to engage more? While everyone likely has their own formula for squeezing in more media each day, we’re seeing increased engagement across apps and web browsing on smartphones and tablets, along with growing use of internet-connected devices. It’s also worth noting that U.S. adults increased their time with live TV in first-quarter 2018 by 16 minutes when compared with third-quarter 2017.

Here’s a look at the weekly reach of the various media options that keep us busy for more than 11 hours each day. 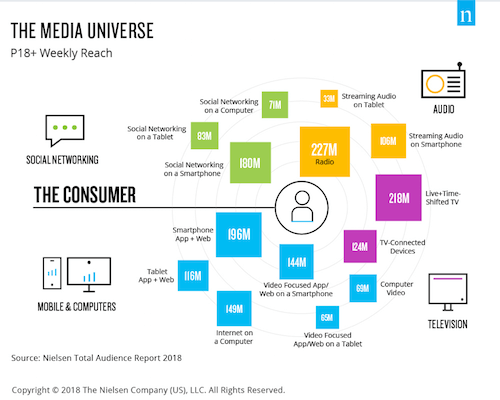 To read the full story, here are Nielsen’s insights.

Adidas consolidates its media business with a single agency

For the first time in its history, sportswear giant Adidas has moved its global media business to a single agency. The big winner was MediaCom, who will oversee business in all markets and territories for the brand.

Both brands of the company, Adidas and Reebok, will be covered by MediaCom.

The move is part of Adidas’ drive behind its 2020 ‘Creating the New’ strategy.

To read more about the move, and Adidas’ strategy, published by The Arabian Marketer, click here.

It’s been quite a torrid time for superstar athlete Serena Williams what with the French Open powers that be dissing her ‘Wakanda’ catsuit. Sponsor Nike handled the fallout brilliantly. And so they should.

As Fast Company magazine points out, any pro athlete would dream of having just one ad as good as any Serena Williams has had so far in 2018, writes Fast Company. “She’s had four. Add to the new Nike spot last week’s Chase bank ad featuring Williams dropping her own version of LL Cool J’s classic ‘Mama Said Knock You Out’,” the business magazine reported. 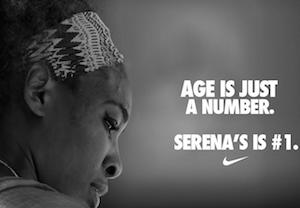 Brands like Nike, Gatorade, and Beats by Dre have effectively been able to tap into the balance between Williams’s fun and her fight, as well as craft an inspiring voice, whether it’s talking about women’s rights, girls in sports, or the challenges of being a working mother, it says.

“Just as her performances on the court have sparked debate and declarations of her legendary status in the sports pantheon, it’s time to consider Williams one of, if not the single greatest advertising athlete ever.” 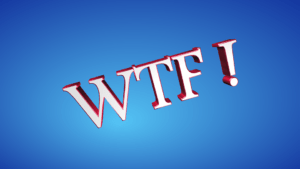 FMCG giant Procter & Gamble is making moves to market its products more effectively to millennials. Included in this, is an application to trademark certain popular social media terms.

Social media platforms have become goldmines for marketers, particularly ones who are looking to connect with younger target audiences, who are obsessed with the likes of Twitter, Snapchat, Facebook, and Instagram.

Whether P&G’s trademark bid succeeds, will be interesting to see, as well as the implications for social media users who use these phrases if they are trademarked. Will they have to pay compensation to P&G?

To read more about the situation, published by WARC, click here.

While it was thought that post-Taliban, Afghanistan’s media was flourishing and had become a shining beacon of media freedom, an article by the Columbia Journalism Review paints a very different picture.

On 30 April, a suicide bomb killed nine reporters and photographers in the country, and media practitioners continue to be caught in the middle of the war zone.

On the regular now, journalists and media practitioners are threatened, harassed, intimidated and attacked. 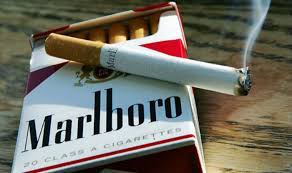 Philip Morris International’s Tommaso Di Giovanni, global director of communications for smoke-free products, spoke to Campaign magazine telling them, “none of our marketing is aimed at recruiting new smokers”. PMI has claimed that it aims to switch “at least 30% of our consumers who would otherwise continue smoking” to non-combustible products.