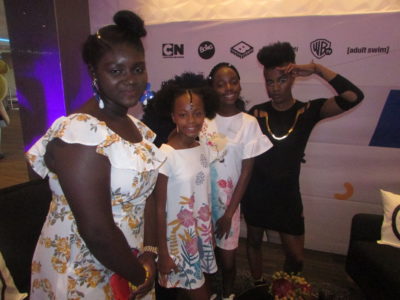 Daniella Soje from Nigeria, Uviwe Bubu from South Africa, and Mwangala Maunga from Zambia were named as winners in this year’s Powerpuff Girls Awards.

They aim to celebrate hardworking and ambitious girls in Africa, who have embarked on innovative projects, and the three were chosen from 3,000 entries from across the continent.

The girls displayed the characteristics embodied by the Powerpuff Girls, which includes girl power and fighting crime before bedtime (for justice and against inequality).

Maunga walked away with the Buttercup Award for her solar water purifier project. She did a lot of research into ways that the sun can purify water, and was inspired to create this project due to the cholera outbreak that hit Zambia hard. “It left our country devastated. Populations were reduced, due to contamination of water, and I wanted to help change this situation,” she explains.

Bubu won the Blossom Award for her project, which delivers sanitary pads to girls in rural areas, still a major problem facing South Africa. She cites her mom as the inspiration for undertaking the project and since it was Women’s Month

“People can’t afford to buy pads in rural areas, they don’t earn much money to buy them. I want to see people be happy and not be ashamed of their situation,” she says.

Soje was named as the winner of the Bubbles Award for her project, which encourages people to turn trash into a business.

“It’s about empowering young people to see art as a form of wealth creation. My business started a year ago when I learnt to make toothpick and matchstick collages and artworks,” she explains.

The mentor and fairy godmother

Artist Toya Delazy is the ambassador for the competition, and is now a mentor and fairy godmother to the three winners.

Her involvement with the competition started two years ago, when she was brought in by Cartoon Network to write the theme song for the reboot of the Powerpuff Girls. This led to her also voicing Africa’s first Powerpuff Girl, Bliss.

The winners were announced and honoured at Turner’s recent Upfront Africa event. Here are some pictures from the gathering: