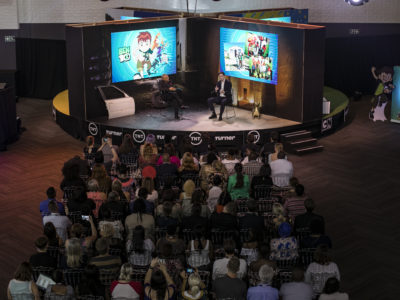 CYBERTORIAL* Turner Africa has been making significant moves in recent months, concluding deals with both SABC and Showmax to increase its presence, and re-branding its TCM channel to TNT.

More information about these moves, as well as upcoming programming across the group’s various channels, was revealed at this week’s Turner Upfront Africa event, held at The Galleria in Sandton.

Emceed by comedian Nicholas Goliath, who kept attendees laughing throughout, the event kicked off with valuable networking before the formal proceedings commenced.

Kids should be very excited for the upcoming content on Turner’s children’s channels, which include Cartoon Network and Boomerang. Brand new and coming soon to the former is Summer Camp Island, a tale of a summer camp that is run by witches.

On the latter, a new show called Taffy, about a raccoon that is mistaken for a cat, and its encounters with a dog, is one to look out for in the near future.

“As Turner, our audience needs are becoming more pertinent and we’re constantly challenging ourselves to be more innovative and creative in our offering to keep attracting and entertaining our loyal fan base, on-air, on-line and for-real. We remain steadfast in our commitment to providing the best service and high-standard content to our fans,” says Jaime Ondarza, senior vice president for Turner Southern Europe & Africa and chief executive officer of Boing SpA.

Turner recently concluded a deal with DStv’s Showmax platform, which for the first time, will now bring Adult Swim content to African audiences. Rated the #1 cable network in the US for almost a decade, Adult Swim offers an epic mix of animation, stop motion and live action comedy. The service will also have a dedicated kids’ corner with Cartoon Network and Boomerang content.

Another exciting deal this year saw Turner Broadcasting bring its iconic Ben 10 programming to SABC audiences, with the English version being broadcast on SABC 3. Due to the massive reception, season one of the popular show is soon to be aired  in SiSwati on SABC 1 and Afrikaans on SABC 2 (End of 2018).

Commenting on this, Guillaume Coffin, VP head of commercial and business development says, “Partnering with the SABC reflects our strategy to expand our brands’ presence in South Africa. We are thrilled to bring Ben 10 to new fans and audiences across more screens and in new languages. Turner is dedicated to a localisation strategy that adapts to the cultural differences of its African markets. Implemented in recent years, this effort has helped Turner address the gap in locally-relevant content, drive programming that resonates with African audiences, and boost brand value across the continent. This collaboration allows new local audiences to engage in the Cartoon Network brand.”

From TCM to TNT

In September this year, Turner relaunched its TCM channel as TNT, with the positioning of being the home of ‘the best American blockbusters’, with creative and relevant programming specially tailored for African fans.  In just one month, the channel saw a 45% boost in ratings (according to AGB Nielsen South Africa TAMs Data, DSTV HH 1st Complete Month – 21 September to 20 October in ratings). The channel has a must see line-up with great blockbusters such as The Illusionist, Crank, Robin Hood, Gladiator, The Island, Jurassic Park and King Kong.

Despite being an international company, Turner has strengthened its footprint in Africa, by not only bringing the best global content, but also by creating meaningful and sustainable partnerships with local content creators, talent and distributors as part of its commitment to a localisation strategy based on the cultural differences of the African market.

These initiatives include CN Creative Lab, Pop Up Party season 2, and the launch of Mike and Rob. African magic will also take centre stage in Boomerang’s new exciting local production set to hit screens in 2019.

Despite being a broadcasting company, there is also a strong focus on digital, with a brand new Cartoon Network website on the way, which will be premiered in Africa.

“Plans are underway to produce original digital productions to further localise our online platforms and engage with our fan base. We are currently in discussion to produce an exclusive local version of our YouTuber, Toony, for our African digital platforms. We are also increasingly strengthening our presence on the ground. For the upcoming season we will be activating the Johannesburg Zoo on the 8th and 9th of December and will tour the Kwazulu-Natal coast for ten days with Cartoon Network and Boomerang’s Beach Tour,” says Julien Borde, Head of Channels for Africa.

The event also played host to the awarding of the very first Powerpuff Girls Awards, with three girls from across the continent being recognised for their projects (click here to read that article).

On the continent, Turner has six channels operating in every single market, These include CNN International, kids’ channels Cartoon Network, Boomerang, Boing and Toonami, and TNT.