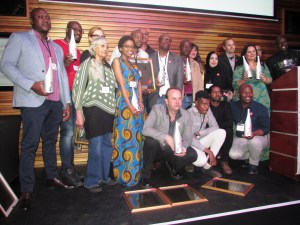 Entries have opened for the 8th Standard Bank Sikuvile Journalism Awards. They are endorsed by Publishers Support Services, and aim to encourage and recognise excellence in newspaper journalism. All journalists and photographers, irrespective of whether they serve a national or community-based newspaper, are eligible for entry.

Entries must consist of material originated and published in a South African daily or weekly newspaper during the period of 1 January 2018 up to 31 December 2018. Entry submissions will start from 21 January 2019 and the deadline for entries is 13 March 2019.

Should you have any queries or would like to obtain copies of the entry kit, contact Penelope Dube or Fatima Seedat at the PSS (Publishers Support Services) offices on Tel: (011) 326 4041 or e-mail: penelope@pdmedia.org.za or fatima@publishersss.org.za.

Now Available Africa (//naafrica.com/), a renowned advertising agency in Accra (Ghana) has released a cover of the viral Sarkodie ‘Advice’ track in celebration of recent wins at the 2018 Gong Gong advertising awards ceremony.

At the industry’s flagship event for recognising and celebrating innovation, effectiveness and creativity in the advertising industry, Now Available Africa stole the night with four Silvers, three Golds and the enviable Platinum Gong for Digital.

In typical creative style the agency chose an unconventional route to celebrate their wins with a compelling cover of Sarkodie’s hit track. In addition to showcasing their awards on the track, Now Available Africa wittingly hit at other advertising agencies and ‘Adviced’ businesses interested in sending their work to the next level to get in touch.

Through this campaign, Now Available leveraged on a popular development in the music and entertainment space and made it relevant to advertising and the business communities.

A group of top creative leaders have been named to serve as jury chairs for 10 disciplines of the ADC 98th Annual Awards (//www.adcawards.org), one of the world’s longest-running and most prestigious global competitions celebrating excellence in craft and innovation in all forms of design and advertising.

This year’s jury chairs for the disciplines are:

Jury chairs for Motion/Film Craft and Fashion Design disciplines will be announced shortly.

The ADC 98th Annual Awards are part of The One Club for Creativity, the world’s foremost non-profit organization celebrating creative excellence in advertising and design.  Entries can be submitted via //www.adcawards.org, final deadline is January 31, 2019.

Alda is best known for his starring role as Dr. Hawkeye Pierce in the hit television series “M*A*S*H,” which debuted in 1972 and ran for 11 seasons. “M*A*S*H,” a comedic drama set during the Korean War, was inducted into the NAB Broadcasting Hall of Fame in 1996. Alda, in addition to playing a starring role in the series, also directed and co-wrote its feature-length final episode in 1983. The show still ranks in the top-ten list of most-watched programs in the U.S. and made Alda the only person to win acting, directing and writing Emmys for the same series.

In 2004, Alda joined the sixth season of “The West Wing” as Senator Arnold Vinick, for which he also received an Emmy. In total, Alda has won seven Emmy awards and has been nominated 34 times. He has made guest appearances on many popular television shows such as “ER,” “30 Rock,” “The Blacklist,” “The Good Fight,” and “Ray Donovan.

Alda first appeared on the big screen in 1963 with “Gone Are the Days!” Since then, he has appeared in dozens of movies, including “Bridges of Spies” (2015 Best Picture Oscar winner) and “The Aviator,” for which Alda was Oscar-nominated for his role as Senator Ralph Owen Brewster.