Entries are now being accepted for the 2019 Frewin, McCall and Joel Mervis competitions.

These competitions will be incorporated into the annual Standard Bank Sikuvile Journalism Awards. The awards ceremony is scheduled to take place on 12 September 2019.

An entry form can be obtained by contacting Penelope Dube or Fatima Seedat at the PSS (Publishers Support Services) offices on (011) 326 4041 or via email at penelope@pdmedia.org.za or fatima@publishersss.org.za. The completed form must be sent by no later than Wednesday, 13 March 2019.

Entries to open for Sikuvile Awards 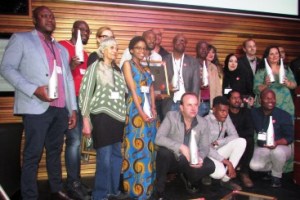 Entries will open on 21 January for the 8th Standard Bank Sikuvile Journalism Awards. The award is endorsed by Publishers Support Services, and is generously sponsored by Standard Bank to encourage and recognise excellence in newspaper journalism. All journalists and photographers, irrespective of whether they serve a national or community-based newspaper are eligible for entry.

Entries must consist of material originated and published in a South African daily or weekly newspaper during the period of 1 January 2018 up to 31 December 2018. The deadline for entries is 13 March 2019.

Should you have any queries or would like to obtain additional copies of the entry kit, please do not hesitate to contact Penelope Dube or Fatima Seedat at the PSS (Publishers Support Services) offices on Tel: (011) 326 4041 or e-mail: penelope@pdmedia.org.za or fatima@publishersss.org.za.

Winners from the 2018 WARC Media Awards

Lifebuoy was the big winner at the 2018 WARC Media Awards, walking away with a Grand Prix for its campaign crafted by agency Mindshare.

The discipline-neutral and channel-agnostic awards, now in their third year, reward comms planning which has made a positive impact on business results.

The full list of winners from the awards can be found here.

Enlisting six top animation studios from around the world to each create a separate segment for the campaign, the One Club for Creativity released the finished “complete “The Cube” short film” to promote the call for entries for the ADC 98th Annual Awards.

The short film collects all six acts together into a single, visually dazzling two-minute piece. Here it is:

The idea for the compelling new short-form online film campaign was developed and produced by brand experience design company COLLINS.

Part of The One Club for Creativity, the ADC 98th Annual Awards celebrate global excellence in craft, design and innovation. Entries are accepted at //www.adcawards.org, deadline 31 January 2019.