Revival of Afrikaans anti-apartheid paper is good news. But change is in order 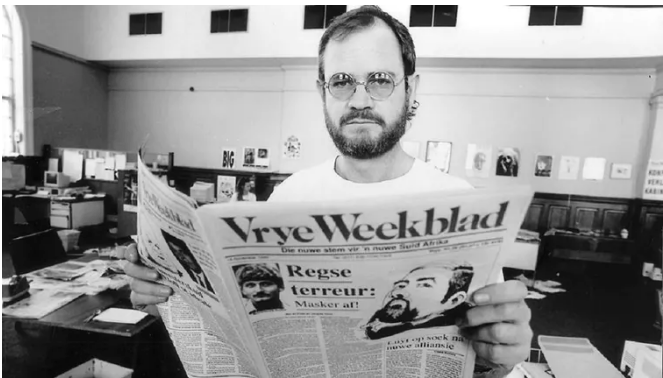 For a generation of Afrikaans-speaking South Africans the relaunch of the alternative weekly Vrye Weekblad (1988-1994), brought a whiff of nostalgia. Its readers remember the publication (first a newspaper, then a magazine) under Max du Preez’s editorship, fondly.

Unequivocally against apartheid, Vrye Weekblad (The Free Weekly) was the paper that helped free Afrikaans from its association with Afrikaner nationalism. It fearlessly exposed the apartheid police’s death squads, and infiltrated the far rightwing paramilitary Afrikaner-Weerstandsbeweging and the secretive Afrikaner nationalist organisation, the Broederbond. It also demystified the liberation movements for a readership isolated by censorship.

It provided columns with counter-cultural irreverence, satire and cutting edge aesthetics. This was reflected in the book reviews, music, recipes, travelogues and cartoons, all united by the common commitment to social change.

In short, Vrye Weekblad provided the kind of journalism that many news consumers today – in a time of shrinking budgets, and receding arts coverage and investigative journalism – would still relish.

Apart from the intrinsic quality of its journalism, there were at least two other factors that contributed to Vrye Weekblad‘s success. Firstly, the repressive apartheid regime was an obvious foil for its alternative journalism. This attracted a critical readership which had an appetite for resistance.

Both those factors are no longer relevant in a democratic South Africa, with a media landscape that has undergone vast changes. Can the new Vrye Weekblad flourish in this new context? Can it provide a formula that addresses the realities of a society that’s undergone major changes, and that can survive in an industry that’s in a state of meltdown?

In my view it could, but it can’t trade on its history alone. It will need to consider the challenges of the present and the future.

Vrye Weekblad gave to some Afrikaans speakers a new sense of identity. Its readers were fed up with decades of lying from the establishment; of having their language appropriated and abused in the service of Afrikaner nationalism, apartheid and a claustrophobic Calvinism; of having their cultural identity tethered to an illegitimate, murderous government.

For many Afrikaans speakers, the publication was the epitome of author Jeanne Goosen’s much-quoted novel title: “Ons is nie almal so nie” (Afrikaans for “we’re not all like that”).

The traces its roots back to the “Dakar Safari” in 1987, the historic meeting in Senegal between the still-banned African National Congress and a group of progressive South African academics, intellectuals and artists. At the meeting, leftwing theologian Beyers Naudé suggested to Du Preez that he start the progressive paper.

Vrye Weekblad thrived with its no-holds-barred approach. But after years of harassment by the National Party regime (no friend of the free press) and state structures, including massive lawsuits and crippling fines, it was eventually forced to fold up in 1994.

The Afrikaans media landscape, too, has changed. Naspers, now a global media behemoth, has repositioned itself away from its historical support for Afrikaner nationalism towards the ideology of the global marketplace. The language is now used as a commodity, and a lucrative one at that. The Afrikaans book publishing landscape is vibrant and Afrikaans digital satellite channels have a strong focus on entertainment. Afrikaans rom-coms fantasise mostly about white worlds, while cheesy Afrikaans dance music is where the money is.

Although the language has lost its political dominance, its (white) speakers continue to enjoy economic power in the media marketplace. Six in 10 of the almost seven million Afrikaans speakers in South Africa are estimated to be black. Yet, in the majority of Afrikaans media, black Afrikaans speakers remain either conspicuously absent, or have a safe presence on the periphery.

Read more:
More than an oppressor’s language: reclaiming the hidden history of Afrikaans

Unfortunately, white identity politics seems to benefit most from the Afrikaans commercial media and entertainment market. Rightwing trade union Solidariteit’s Maroela Media is an example of how the internet has provided a platform for the mediation of reactionary identity politics. The biggest exception has been the Afrikaans tabloid Son, owned by Naspers, which addresses Afrikaans-speaking township readers in their idiom with stories about their lived experience.

The resurrected Vrye Weekblad will in all likelihood find its most loyal readers among white Afrikaans speakers who have to disown rightwing organisations like Afriforum and racists like Afrikaans singer Steve Hofmeyr who try to speak on their behalf. The publication might attract a younger generation that will relish the opportunity to read good journalism in their own language without having to subscribe to the cultural mediocrity and moral conservatism clinging to many Afrikaans cultural products.

Others may just be attracted by the quality of the content. If the new Vrye Weekblad manages to reproduce the variety, vitality and vibrancy of its predecessor, it should have a shot at success.

There is, however, a major caveat. Even though the majority of Afrikaans speakers are South Africans of colour, they have historically occupied a marginal position in the Afrikaans media, and continue to do so. And by the looks of it, they might continue to do so in the new Vrye Weekblad.

It is disappointing to see that the triumvirate leadership of the revived Vrye Weekblad – Du Preez, Anneliese Burgess and Jacques Pauw – is an all-white outfit. Nobody can doubt their journalistic prowess. But this is an opportunity to appoint black Afrikaans-speaking journalists to the highest ranks of the publication.

For it to truly break new ground in Afrikaans, the new Vrye Weekblad should appeal to all readers of the language across class, race and gender. That is, admittedly, a tall order. But the old Vrye Weekblad had a reputation of never shirking from challenges.