Courageous journalist Qaanitah Hunter: The challenges of being a young woman in media today 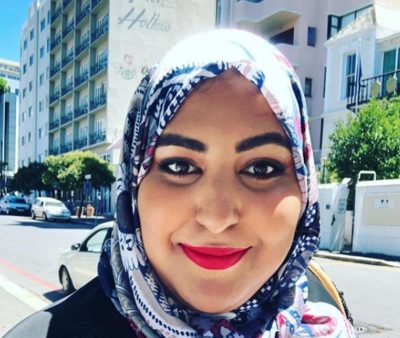 
This year’s winner of the Nat Nakasa Award for Courageous Journalism and Integrity, Sunday Times political journalist Qaanitah Hunter, already has an impressive body of work under her belt at such a young age. She is just 25 years old.

“It was a huge shock because the award is usually given to people at the culmination of their careers, and being the youngest person to receive the award was a tremendous honour, considering the type of people who have won it in the past. It affirmed the work I’ve been doing for the last seven to eight years,” she says.

Hunter points to this award as the highest point of her career thus far, as it rewarded her whole body of work and contribution to journalism rather than particular stories she’s covered.

Mental health in journalism and freedom of the press

Hunter’s efforts, though, extend far beyond her work as she’s also an active advocate for mental health awareness in journalism, and for freedom of the media and fighting against intimidation and attacks.

On the former, she explains how important it is in the context of Nat Nakasa, who tragically ended his life after talk of depression.

“Nat Nakasa died at a very young age due to mental health issues. It’s absolutely important to create awareness around it, especially among journalists, as we are exposed to so many traumatic things and stressful encounters, which can take a toll on a journalist’s mental health … As a result of me speaking about my own issues with anxiety and my efforts to seek help for myself, has empowered so many other people … Nat Nakasa was 28 years old when he died. What more could he have contributed to journalism had he gotten help about mental health issues?” elaborates Hunter.

The state of journalism in South Africa

Hunter believes South African media emerged stronger than ever from the Jacob Zuma years in power, as it had to hold democracy in the country together while government, its institutions (besides the then-Office of the Public Protector) and many politicians were failing in their duty to the country.

She sees fake news as a challenge to journalists, who need to ensure 100% accuracy and validity of the stories they cover, as well as under-funding of these practitioners, which impacts on their ability to do their work.

Asked about her experience of being a woman in media, particularly in the political arena, Hunter echoes stories of other female journalists, which paint a very worrying picture.

“Patriarchy and chauvinism looms large in journalism and the political space as well, and it’s an issue facing the country as a whole. While there has been some formidable steps to advance women’s cause in journalism, we have a long way to go… You can’t have glass ceilings for women. They need to be given a seat at the table. There are so many women in journalism, but if you look at how many of us actually make it to top positions, there’s some disparity there,” she comments.

Hunter sees social media and its function in journalism as a double edged sword. While journalists are using it to interact more intimately with readers and their audiences, at the same time there are negative results of it, including fake news, bots and vitriol.

“Automated users on social media have muddied the space and it’s opened up journalists to unprecedented attacks. While journalists being attacked is not new, the intensity that social media has allowed for it to unfold has become a huge problem, and to a large degree, has actually defeated the point of social media for journalists,” she explains.

The anonymity of social media is another problematic factor, and Hunter sees attacks on female journalists as a massive concern. “All journalists are attacked, but when you see the types of attacks women journalists get, you realise that there’s always a personalised issue, a sexualised issue to them,” she adds.

Her approach to journalism

Hunter’s philosophy to storytelling is to not tell people what they already know or have seen. “What motivates what I do, is getting beneath what people can obviously see on the surface, and say ‘this is why’ or the reasons behind stories,” she adds.

A relentless drive to constantly seek the truth and the reality of what’s happening behind the scenes and unpacking it for people to explain why things are happening, which she believes is in a person once it’s in them, is what keeps Hunter driven.

Her work covering state capture, before the Zondo Commission was even conceptualised, and coverage of the Maharani meeting, where former President Jacob Zuma and his allies met to supposedly plan a way back into power, are two standout stories for Hunter which she is proud of.

Hunter exudes passion and enthusiasm for her work throughout the conversation. “It’s important to have passion, because of how demanding and rewarding this industry is. There has to be something more that drives you in this career,” she believes.

Hunter thinks investigative reporting should be a tool that every journalist has, no matter their sphere of reporting or how junior or senior they are, and that it should be accessible to everyone. This, in order to go beyond the obvious and report the how, why and consequences of a matter.

However, she sees a lack of mentoring and teaching of investigative journalism skills in South Africa, and strongly calls for better accessibility for this valuable journalistic endeavour.

Her advice to young journalists? “This industry is not glamorous. You have to work your butt off. It’s a constant hustle. Learn, shadow people, and don’t be afraid to ask questions! Good journalism comes from good probing and you have to be inquisitive as ever.”