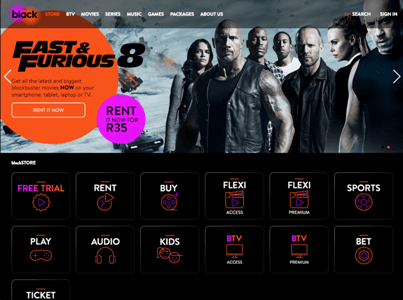 From movies and series to sports coverage, video on demand is a blossoming business in Sub-Saharan Africa. Cell C is the latest entrant into the South African market.

Using the tagline ‘The Future of Entertainment. NOW’, Cell C on Wednesday morning launched its VOD offering, black. “What we haven’t done well in South Africa is bring content in a cost effective way to the masses,” said CEO, Jose Dos Santos.

He described black as a “totally interactive platform” with a multi-service approach, a one portal solution that brought together content and services. These included movies, series, live TV, soccer coverage, buying tickets, betting, booking hotels and flights, music, and games.

The move by CellC is right on time: According to a report by Simon Murray, principal analyst at Digital TV Research, over-the-top (OTT) movies and TV content revenues will reach US$640 million in Sub Saharan Africa by 2022 up by a factor of 12 on 2016 ($52 million). And, said Murray, it was “important to stress the power that mobile operators have over the future of Sub-Saharan African OTT TV and video”. Murray said mobile operators are in a powerful position. “Not only can they give OTT players access to their extensive subscriber pools, but they can also conduct the billing – thus foregoing the need for SVOD platforms to insist on credit card payments”

Which is exactly why CellC is now in the driving seat. Dos Santos explained that the major differentiating factor of this service to other VODs or Subscription Video On Demand (SVOD) was that black would allow Cell C’s pre-paid subscribers to buy content with pre-paid airtime. All other VOD services require the user to have a credit or debit card.

It will target the 27 million smartphones, which are currently in the South African market, according to Dos Santos.

It’s no secret that sports rights have been monopolised in South Africa, with DStv holding the majority. “Local sports providers are tying rights exclusively with certain broadcasters. It’s anti-competitive behaviour,” said Dos Santos. “We have been engaging with local teams. They should separate it so they have broadcasting rights and streaming rights”. He added, “I can go buy international content. Why is the local content exclusive? Why are we tying football clubs to exclusive deals? What are they scared of for 20 to 25 years?”

Cell C has concluded deals with five international soccer clubs; Barcelona, Chelsea, Liverpool, Manchester United, and Real Madrid, whose content will appear on the channel. Discussions have also started in buying other major sport’s rights, including the Rugby World Cup. Dos Santos said he would meet with the organising body in the next two weeks.

At launch, customers will have access to 5 000 movies, series, music and documentaries, which will include both international and local content. Sixty live TV channels will cover music, news, travel and lifestyle, movies and children’s content.

A package to access all the content (excluding renting and buying of movies) is available at R389 a month. Packages can also be tailored with hourly, daily and weekly options available.

Cell C’s original reality series Hangman will be flighted on the platform and the telco also intends creating original movies, both local and international.

This platform has been in the works for two years. Dos Santos said he approached a major player with a partnership deal but they refused. “No one was flexible enough so we did our own thing,” he said.

Black will be available from 3 November; consumers can access it by downloading the black Android & iOS apps using a tablet or phone. It will also available on a web interface at www.black.co.za. The platform’s official launch is 14 November 2017.

Here are some pics from the launch event: