LATEST NEWS
Home News Student gun violence activists make their voices heard, but do they really have the power?

Student gun violence activists make their voices heard, but do they really have the power? 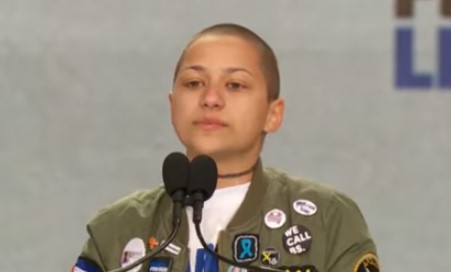 Emma Gonzalez’s powerful silence made a poignant statement to US lawmakers and the public: students have had enough of school gun violence.

Gonzalez’s address was part of a much bigger picture, as more than a million Americans, mostly students and youth, took to the streets in protest; 175 000 attended a rally in New York, while the biggest gathering took place in Washington DC, with over 800 000 in attendance.

The media covered the marches extensively; for once it seemed the students now setting the news agenda. Previous calls by rights organisations to see the media minimise the naming and profiling of school shooting perpetrators, something which happens constantly, has been replaced by coverage of the bigger debate with the students and the National Rifle Association (NRA) going head to head.

But not everybody is convinced that the students are now in control.

“The fact that you’ve got a lot of young people marching, doesn’t necessarily mean that they’re now shaping that agenda; it just means that media are broadly speaking doing their job,” says William Bird, director of Media Monitoring Africa, which advocate for a child-centric approach to news reporting to ensure that the best interests of children remain top of mind.

“If we were to make a claim that they are shaping or determining the agenda, then we will be saying ‘in what ways are media exposing and revealing the power of something like the NRA, exposing the inconsistencies in arms manufacture and possession and what methods are being used to combat these things’.”

A symbol of the movement

Bird refers to Gonzalez as a symbol of the movement, but again denounces its power. “It’s good that you’ve got a young voice out there, [one] that’s trying to help determine these things, and it’s good that media cover it extensively. But it does not mean that they are taking control of the news agenda, certainly not in a systematic way. It’s something media is responding to, rather than young people saying ‘we are going to shape the news agenda on coverage of these issues’.

“Until we have a consistent approach that says when there’s a school shooting the people we need to be speaking to are young people and getting their views and letting them determine what questions we should be asking those in power, we cannot make a claim that they’re shaping the agenda,” says Bird.

He adds that young people need to continue their activism, but stresses that “news is a reflection of power and those that have power are generally the voices you will hear, which is why young people don’t often get heard … They need resources and power to shape the news agenda”.

Asked whether he believes media should minimise naming and profiling school shooters Bird replies, “You could say that any criminal we shouldn’t name or identify because it gives them too much power. If you consider this against the principles of open justice and the right to know, then this doesn’t seem fair and appropriate.”

Historically, media tends to focus on perpetrators, rather than victims. “If you look at any murder case, they look at the serial killer rather than the victims. If you look at Marikana, the miners who lost their lives, if exceptional measures weren’t taken by the media to give them a face, the victims would have probably just remained victims of a terrible circumstance … There are ways to make sure victims are humanised and that their lives aren’t just numbers that are lost,” says Bird.

Another problem with reporting on crime, particularly violent ones in South Africa, is that media focuses on the act itself, rather than why it happened. “Once we start to understand the things that cause the violent crime, then you make the crime a lot more about the victim, as opposed to the perpetrator,” Bird believes.

In South Africa, if a minor is involved in criminal proceedings as a perpetrator, the law forbids that they be named by media. A famous example stems from the Eugene Terre’blanche case, where court proceedings took so long, that the minor involved turned 18 before they had concluded. Media named him as soon as he turned 18, which caused major trouble for him and his family.

The court case around this is ongoing. “If you’re afforded special protection and justice as a child in the criminal justice system, which is fair and appropriate, then it follows that protection should continue after that, unless you commit further crimes as an adult, in which case you’re going to be named in court,” says Bird.

With media outlets competing for viewers, and particularly now with social media being a serious competitor, the rush to reveal details about perpetrators of crime is without a doubt a driving force in its coverage. What it needs is an emphasis on balanced reporting, which gives the voices of victims and their loved ones a chance to be heard.

Kudos to Emma Gonzalez and the mass of students and youth, who are standing up and shouting their message loud and proud. Let’s hope the media digs deeper into the debate, and holds parties accountable for what they say and do, rather than simply naming names and profiling perpetrators.