What next for WPP after Sir Martin Sorrell’s abrupt resignation? 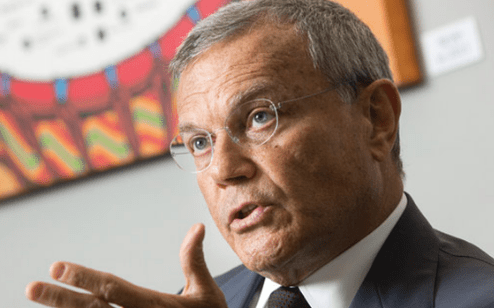 Sir Martin Sorrell’s sudden resignation on Saturday as head of WPP, the giant advertising media company he founded 33 years ago, has reverberated throughout the world – including South Africa.

Sorrell resigned after an internal investigation into his personal conduct. In a statement, WPP said “Sir Martin will be treated as having retired on leaving WPP, as detailed in the Directors’ Compensation Policy. His share awards will be pro-rated in line with the plan rules and will vest over the next five years, to the extent Group performance targets are achieved”.

“Obviously I am sad to leave WPP after 33 years. It has been a passion, focus and source of energy for so long,” Sorrell said. “However, I believe it is in the best interests of the business if I step down now. I leave the company in very good hands, as the board knows. Mark and Andrew and the management team at all levels have the knowledge and abilities to take WPP to even greater heights and capitalise on the geographic and functional opportunities. I will particularly miss the daily interactions with everyone across the world and want to thank them and their families for all they have done, and will do, for WPP.”

WPP, as a massive holding company, owns agencies across the globe in a complex web of media businesses. In South Africa, it owns a significant number of companies including MediaCom, Group M, Burson-Marstellar, Cerebra, Wunderman, Smollen, The Hardy Boys, Grey Africa and many more.

“MediaCom has a solid transition plan in place and will continue business as usual across the globe including South Africa,” said CEO, Ashish Williams. “Our strategy remains the same, and that is to put our clients business first, and continue to evolve as an agency.”

Not a ‘pretty year’

It has not been a “pretty year” for WPP, in Sorrell’s own words. Its “gloomy forecast” in March “triggered a brief suspension of its shares as investors rushed to sell”, as The Telegraph reported at the time. Sorrell pointed to the dominance of tech giants such as Google and Facebook as being an issue, as well as shareholder activism. Added to that, global consumer brands are trimming marketing spending, and the continued growth of consultancies threatening the power of big holding companies.

As Digiday reported, Sorrell’s resignation could herald “the end of an era — not just for one of the most outspoken and public-facing advertising figures of our time, but for the concept of a holding company itself”.

Holding companies, which arose over the past few decades, were created ostensibly because of economies of scale, although the truth was that it was a way to avoid conflict situations so agency groups could have multiple clients in similar sectors. With lots of agencies came a bigger piece of the marketing pie — especially if a holding company’s agencies could do creative, media and maybe even some ad tech,” Shareen Patak wrote in Digiday. Referring to a Barclays note on Sorrell, Patak says “in terms of company performance, the most positive change would be if WPP restructures to address industry issues. One way to do that would be to merge agencies.

“Being spread out was very fine for more than 30 years when WPP was a delivery machine. We think this is no longer optimal and would favour some injection of revolution at WPP rather than only sticking to evolution,” the note reads.

Bloomberg has a similar view, pointing out how share price fell on news of Sorrell’s departure. “The shares fell as much as 6.6 percent with WPP’s future strategy now unclear. Sorrell, who turned a 1985 investment in a wire shopping basket manufacturer into today’s behemoth of more than 200 000 employees, was long seen as irreplaceable — the man pulling the strings to connect its more than 400 agencies who create marketing campaigns for clients such as Coca-Cola Co. and Procter & Gamble Co. Now, the group faces pitches from investment bankers pushing asset sales or a more dramatic dissolution,” Joe Mayes wrote.

Speculation is rife about the future of the media giant. Hugo Duncan, writing for This is Money financial website, suggested, “WPP could be broken up in an £8 billion sell-off as it battles to keep hold of top clients including Ford, Mars and HSBC following the shock resignation of Sir Martin Sorrell”.

Duncan, quoting analysts, said WPP’s market research and PR operation could be “sold for more than £5 billion while a further £3 billion could be raised offloading investments in other companies”.

He quoted Goldman analyst Lisa Yang as saying WPP faced the “potential risk of disruption” to its operations, especially “at a critical time when WPP is renegotiating with its largest client Ford and defending a number of accounts including Mars, Jaguar, HSBC, Shell, etc”.

Whatever happens as the new joint COOs battle to figure out where to next, Sir Martin Sorrell won’t lost out: The Guardian reports Sir Martin Sorrell is in line for almost £20m in payouts from WPP over the next five years, as part of the deal struck to leave the advertising group he founded more than three decades ago“.