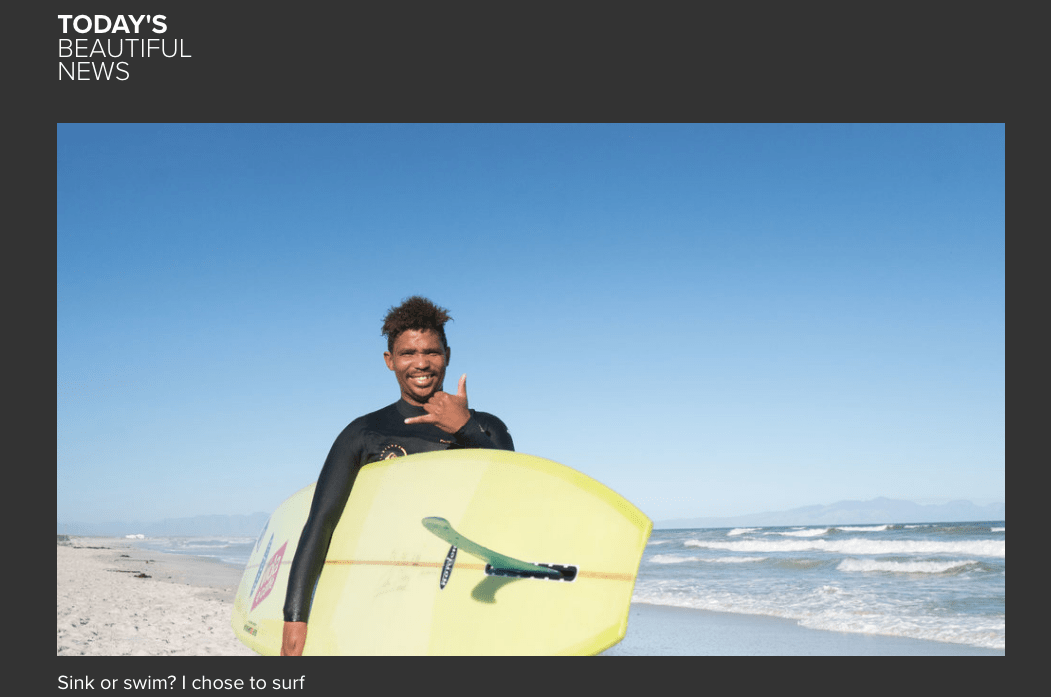 Now another year of good news has been secured, as sponsor Mercedez-Benz SA has reaffirmed its deal with Beautiful News.

“We started this journey with the intention of trying to be relevant in a space where bad news really trumps any other news. Bad news travels a lot further and gets the most attention and conversation… We want to be part of the possibility mindset,” explains Miles Bhana, vice president of group corporate affairs for Mercedes-Benz Cars South Africa.

The car manufacturer’s aim was to be relevant, while still bringing positivity, sticking out from the bad news and inspiring and motivating ordinary South Africans. This led to the creation of Beautiful News.

Photographer and filmmaker Adrian Steirn, who curates and produces Beautiful News, stresses that the platform is editorially independent, with Mercedes-Benz SA having no say in the stories that are covered or how they are told.

“Mercedes-Benz is not there to sell cars, they are there to give back to South Africa … There are not many brands in SA that will turn around and say ‘we like what you do, we want to make this happen, we want to see more of it, and we’ll sign this contract and you go and do your thing because we think it’s good for communities and society,” he says.

It runs exactly like a newsroom, with a team of six researching and sourcing stories and then producing the video content. Stories are sent through to them and they also find original pieces. One is released per day, due to logistical limitations of making a film of that quality per day.

The editorial criteria for selecting a story includes positivity, community-focused stories, where an individual is going beyond oneself to benefit their community.

“One of the first questions that was asked when we began this, was ‘are there enough good news stories coming out of SA?’ The answer is yes, there are many throughout the country,” comments Steirn.

He adds that the major positive for him is “shifting the paradigm of South Africa being catastrophic or in turmoil or more bad news, to finding and telling good news stories, which are being shared”.

Social media has been a powerful tool for increasing the awareness of the Beautiful News brand and the content it produces, with a huge amount of likes, shares and interactions.

The most unique element of Mercedes-Benz SA’s marketing approach to Beautiful News is the lack of sponsor branding in and around the content. In the first year, their logo only appeared at the very end of the video, while in the second year it also flashed across the bottom of the screen for a brief moment, as well as appearing at the end.

This was a deliberate tactic by Mercedes-Benz SA. “It was all about not coming across that we are doing this for commercial gain. We wanted to do it in the right spirit, and that was ‘how do we create communication that is going to move somebody to a point where they’re motivated and inspired’,” said Bhana. He added that with Mercedes-Benz being a luxury brand, it needs to work itself from the bottom up to inspire people to become successful.

Over regulated vs self-governance

Steirn gave an interesting comparison between human interactions in South Africa vs those in Australia, commenting, “South Africa is self-governed in many ways. We choose to do the right thing in the country because we are not over regulated and that choice makes us a unique community.

“I’m Australian, came here 11 years ago, and was blown away by the choices people make every day. I come from a nanny state, we are over regulated and we couldn’t make our own decisions if we wanted to and in South Africa it is community-minded every single day.”