Success tips from the evolving Media Agency of the Decade 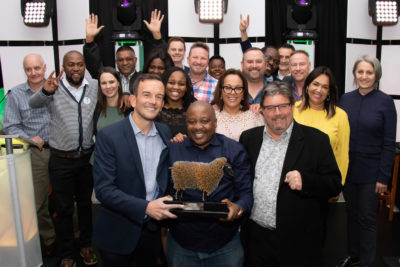 He stresses that treating business associates as partners is key, and uses a chair analogy to describe any media relationship. “It has four legs; the media owner, the media agency, the client, and the creative agency. If all four legs aren’t equally strong, the chair will collapse.”

And he adds, “For us, if we don’t treat our media owners like we treat our clients, then it’s going to be a weak leg on the chair, and it will fall over.”

The MediaShop, which celebrates its 30th anniversary this year, recently announced the creation of a brand new agency, Park Advertising, with The MediaShop and new agency, Meta Media, as its subsidiaries. Central services will sit within Park Advertising, including the human resources, finances and IT divisions, while the two agencies will have separate boards, separate executive management teams, and will be housed in separate buildings.

“With any business, you get to a point where you have size and scale, but your growth is limited. Starting a second agency gives us a lot of opportunities,” Botha says. These include the chance to pick up new business through additional capacity and new opportunities for staff members.

‘I want the two agencies to hate each other’

Asked about the differentiators between the two agencies, Botha describes how he envisions the relationship playing out: “Meta Media is a brand new agency, born in a digital age, born in an age of data. It’s got a different positioning than to where The MediaShop is… It’s like someone gave me a blank piece of paper and said ‘OK, how would you like to do it’.”

Reluctant to disclose much more than that, Botha stresses that Meta Media will be a 110% competitor to MediaShop, despite being a sister agency.

Room for another agency?

Despite the cluttered media agency space in South Africa, Botha believes there is still plenty of room for another agency; it’s all about differentiation, he says.

“There might be lots of media agencies, but there’s an opportunity for us to do better work and to replicate some of the successes we’ve had in MediaShop.

“If you look at MediaShop, we are, to an extent, still hamstrung by 30 years of history. With Meta, I see it as an opportunity to take the best of what we have so far, and make it better without having the baggage from a MediaShop history.”

Botha identifies evolving as a current challenge in the SA media agency space. “To now distinguish between what a PR agency does and a digital agency does is very hard to do. All agencies are sitting here, struggling to define what they are as businesses”.

He further explains that agencies are offering so many different things, that “they are struggling to grasp who and what they are”.

Botha believes that the longer term play is agencies moving towards a single agency model again. “It’s a bit like a teenager trying to get to know who they are as a human being,” he comments.

Botha is eyeing more success for The MediaShop going forward, while he is excited for the prospects for Meta Media, which haven’t been fully nailed down as yet.

“MediaShop will be that agency that keeps pioneering and remains successful, evolving, and at the front edge. For Meta Media, I can’t tell you what to expect because it will keep changing,” Botha concludes.