LATEST NEWS
Home News The elections you shouldn’t have been interested in: An analysis by Vincent Maphai

The elections you shouldn’t have been interested in: An analysis by Vincent Maphai 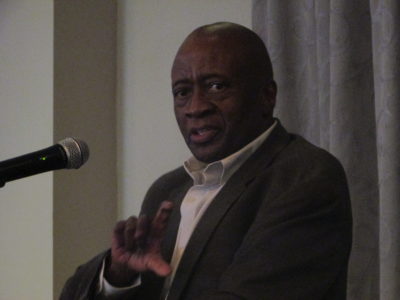 Businessman, academic and political analyst Dr Vincent Maphai did not mince his words when he addressed attendees at The MediaShop’s post-election analysis event, saying from the get go that the 2019 election was the only ones people shouldn’t have been interested in.

[Maphai has just been appointed chairperson of the Sibanye-Stillwater group.]

He identified this as a problem of the proportional representation system present in the country, “as politicians are accountable to the party that put them there, not to the people”.

In the same vein, Maphai said he believed these past elections would have no impact on the media as “freedom of the media is always guaranteed”.

“One of the things that has saved South Africa and will continue to save the country is freedom of the media… The media is untouchable. You may be attacked, and if you are not attacked then you must know you are not doing your job. I used to tell my colleagues at SABC that the only time you should worry was when no one is attacking you,” he added.

Asked about the EFF’s attacks on journalists, Maphai said he hoped President Cyril Ramaphosa would open communications with Malema’s party to put a stop to them.

The only media crackdown he sees happening are restrictions on social media abuses.

However, one thing Maphai would like to see more of from the media, particularly around political reporting, is deeper stories, rather than surface level snippets and soundbites.

“I would like to see the media [being] much more introspective. The media likes shorthand and generalisations and not delving deeper into things… For example, instead of looking at just the national picture and overall votes, media should be digging into provincial votes for each party,” he explained.

Maphai said elections were free and fair, and praised the Independent Electoral Commission for its work, but he touched on the ink issue, which raised concerns and queries around double voting. He revealed that voting along racial lines (i.e. black people voting for ANC and EFF and white people voting for DA and FF+) was becoming murkier territory, but in terms of spoilt ballots, Maphai reckoned this was a non-issue.

He said the election outcome for the ANC was the highlight for him, as giving the ruling party too much power would have been problematic for the country, and the amount it got was a warning to them to ‘shape up or ship out’. The low-point for him was the voter turnout numbers, particularly among young people.

“What happens within the ANC, what Cyril Ramaphosa does, is really what’s going to define the country going forward. The fact that the EFF has doubled its vote, it’s interesting but neither here nor there. The fact that the Freedom Front Plus has done well, it’s not going to fundamentally change the equation in the country. What happens in the ANC and the decisions Ramaphosa makes will,” Maphai elaborated.

He predicted that the 2023 election would be a watershed moment for the country, and urged people to be more interested in them than unpacking the 2019 ones.

He also warned of the rise of extremists, who are emerging due to confused parties who don’t know what they truly stand for, as well as the diminishing value of the liberation dividend (people getting tired of the ANC touting the fact it liberated South Africa from apartheid, especially with the new born-free generation). He added: “The ANC can no longer rely on the history of the struggle, it’s about delivery now.”