All the SA Cannes Lions winners

The 66th edition of the Cannes Lions Festival of Creativity wrapped up, with South African agencies having a strong showing at this year’s awards.

Here’s all the award winners from South Africa:

Edgars’ wild and vividly cultural short film ‘Don’t Tell Me What to Do’ scooped a Bronze Entertainment Lions Award, at this year’s Cannes Lions International Festival of Creativity.

The award-winning 90 second anthem of self-expression created for a newly refreshed and rejuvenated Edgars is an unapologetically fierce collaboration with South African culture, channelled by a legion of the country’s most expressive personalities.

South Africa’s fastest rising star Sho Madjozi worked with Edgars to co-create the playfully defiant song she performs in the film, and we see her hitting the colourful streets of Joburg while a diverse crew of everyday people and some of South Africa’s most expressive creators of influence get down, play around, and express their unique selves.

With 133 million media impressions, an 800% increase in share of voice, over R50 million in earned media, and a whopping 533% increase in brand sentiment, the newly enhanced Edgars is definitely winning back the brand love.

Here is the film: 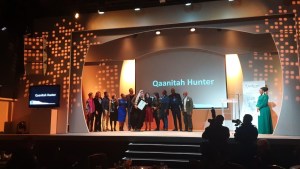 She was commended by the judges for openly speaking about depression and anxiety that affects journalists.

Hunter said it was important to acknowledge the effects that attacks and social media bullying had on journalists.

“Yes, we are brave and we write these stories, but that shouldn’t stop us from acknowledging the effect it has on our mental health. It is not often spoken about. People think journalists are machines when reporting on difficult stories. The effect that it has on us is important to discuss.”

Hunter has covered high-profile stories involving politicians and the Gupta leaks. Last year she received an image of a gun from ANC Women’s League secretary-general Meokgo Matuba via text message – this as Hunter and fellow journalist Jeff Wicks reported that former president Jacob Zuma and his allies were plotting to unseat President Cyril Ramaphosa following a meeting at the Maharani hotel in Durban.

The criteria for the award by the South African National Editors’ Forum (Sanef) include showing integrity, reporting fearlessly and displaying a commitment to serve the people of SA.

Hunter said she was humbled by the award as it usually recognised journalists at the end of their careers.

“This validates my efforts over the past eight years. At 25 years old, I am in the formative stage of my career. It is humbling and encouraging to know that this is not the end, but my beginning.”

Congratulations to all of the finalists who have been named in the Frewin McCall and Joel Mervis Competition.

They are as follows:

The winners will be announced at the Standard Bank Sikuvile Journalism Awards evening on 12 September 2019 at The Venue, Melrose Arch.

The week of the Marketing Achievement Awards and Summit arrives

This week will see the inagural, previously postponed Marketing Achievement Awards and Summit taking place at Sun City Resort in the North-West Province.

The event, on June 27, is endorsed by the Marketing Association of South Africa.

After a day of presentations, case studies and discussions, the awards evening will take place, which will see Archbishop Desmond Tutu inducted into the South African Hall of Fame.

The South African Hall of Fame celebrates great achievements by extraordinary South Africans in order to inspire the youth and empower them to holistically reach their full potential.

Perhaps what makes Tutu so inspirational and universal a figure is his unshakable optimism in the face of overwhelming odds and his limitless faith in the ability of human beings to do good.

“Despite all of the ghastliness in the world, human beings are made for goodness,” he once said. “The ones that are held in high regard are not militarily powerful, nor even economically prosperous. They have a commitment to try and make the world a better place.”