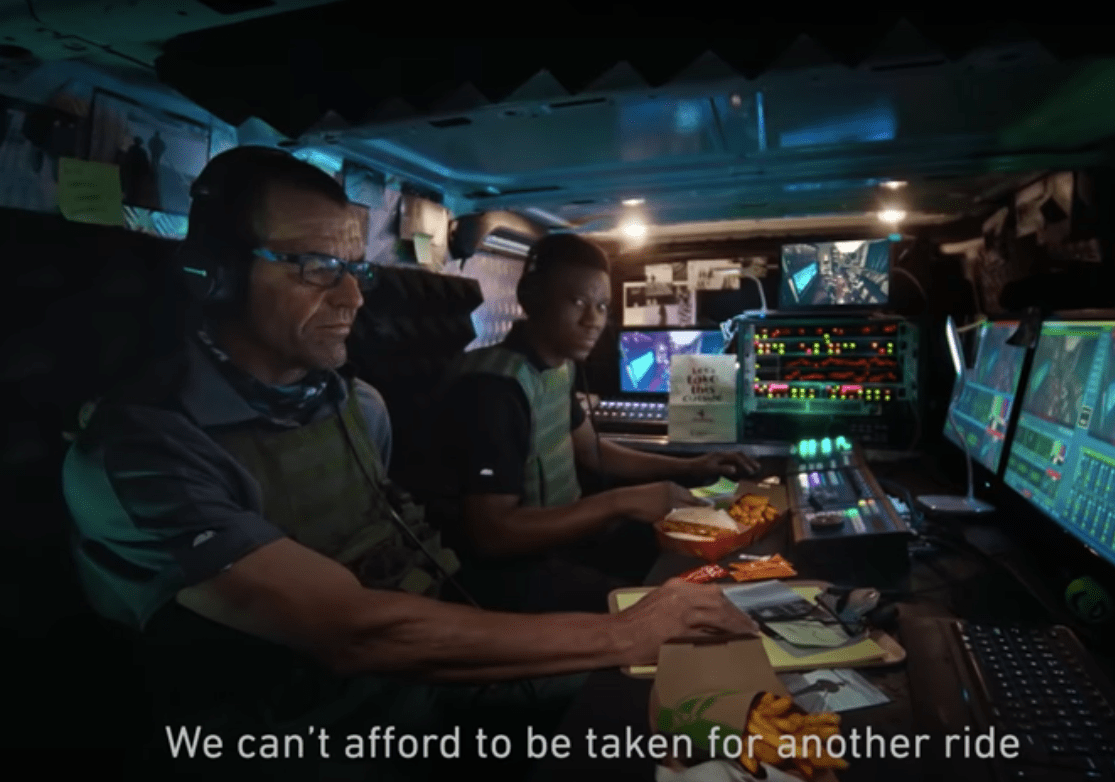 At least the Nando's 'Scamandla' ad had us in stitches

Is it just me or is the nation suffering from #PTSD and #BurnOut? I watch the news like a robot, very little emotion and even less interest. Mmm hang on, this was when the #AntiVaxxers lined up outside #GrooteSchuur. Let’s see if these guys have a point; perhaps I’ve been microchipped and turned into a #TeslaBot.

They lined up, one Karen after another, shouting about #BillGates and the #microchip. One of these demonstrators was #KoutharDavids. She seems to suffer from memory loss because only a few months back she documented her #CovidJourney, yet this week she is on tape saying she doesn’t believe Covid exists.

I never wanted to go there, but when a story like this presents itself, it’s hard not to. A word with the #AntiVaxxers please. How on earth can you say that Covid-19 doesn’t exist when most of us have fallen ill to it and many of our nearest and dearest have died. How dare you? You are insulting our intelligence and trampling on our graves! That’s the first thing!

Secondly … as for the #illuminati wanting to microchip us, I think we need to address this. A simple walk through should do it. Let’s assume you are right and the vaccine acts as a microchip – and then? Do we get served more relevant ads when Facebook or Microsoft (or whoever you believe is behind this hoax) gets the world chipped? Is that even necessary as the algorithms are already doing a pretty good job having already worked out almost exactly what we do and don’t like. Did I miss it?

Some are saying that it’s a depopulation drive? If so, there are many and I mean most of the vaccinated people still alive, so that’s not working too well. Listen, South Africa can’t fix a pothole, yet you believe they are going to exercise complete and effective mind control. Just look around you at how the politicians are on a merry-go-round to try and avoid axing, step-asides and assassinations. Look beyond South Africa, look at the UK and the USA;  Boris Johnson and Joe Biden couldn’t organise an exit from a war they were losing, how on earth are they going to co-ordinate a planet?

The UK, to date, have over 30 000 infections a day, they have a lack of skilled workforce because of #Brexit and you expect Boris to control seven billion people? Get out of here! He can’t even comb his own hair and Biden doesn’t know who he is when he looks in the mirror.

Take the vaccine, not that it will definitely work, but because it might work and right now, we are swimming upstream. As if to prove my point, the youth 18 to 34 cohort came out in their millions to take the jab. If anyone is awake about what’s going on in this planet, it’s these guys. Social media will not allow them to sleep and even they think it’s a good idea.

#KoutharDavis get in line or very soon you won’t be able to line up for anything. Vaccine passports or passes are a reality and #vaccinehesitancy is just slowing us down and will exclude you. We heard about the suggested, no vaccine no booze drive, what level of stupidity is this? I mean really, it’s like telling teenagers they need an ID card to get booze; that works, hey? Are you listening Kouthar? These are the type of rules we are considering.

#Limpopo created a campaign saying #NoVax #NoDating. I’m sure that will work just like the quest to quell teenage pregnancy and the spread of HIV. Still here, #Kouthar? We’re not the only country plagued by naysayers. In Australia they are offering $150 for you to have the vaccine; now that might just work in South Afroca except the vaccine taker knows they’ll see that money in about eight months and when 70% of our youth are unemployed I’m going to say even that won’t work in South Africa.

The unemployment statistics read that seven out of 10 of our educated youth are not gaining any workplace experience at all and cannot feed themselves. What are we doing here? Building a nation of starvation? In total 34% of the country haven’t got jobs. That’s one in every three that are eligible for work simply cannot be accommodated. Poverty creates desperation, desperation creates desperados.  Here’s a hot mess waiting to unfold. Then the #CrimeStats came out and guess what, there was no significant drop even though we we’ve been restricted for over 500 days. #GBV takes the first prize as always.

This week the media focused on the horrendous murder of #Nosicelo a #MurderMostFoul. Why do our men have to kill women with such hate? Does this happen anywhere else in the world? The hate is so bad that a woman is stabbed in her pregnant belly hanging from a tree and now this #Nosicelo’s body was chopped up and put into suitcases. What drives this?

We are in a pandemic, we are in lockdown, you’d think there would be some positive impact on crime by barricading in a nation. Well, we were wrong; if anything, it exacerbated the #GBV stats to such a level that we are the proud owners of the first prize in GBV stats across the world. A badge our country seems to be quite blasé about wearing. Over 50 000 women in a year reported GBV; that’s about as many as died from Covid-19. This is an epidemic that has beset our country for decades.

When will the women rise up and say enough? When will we see the rocks that are our women say “No more”.  Men aren’t going to it for us, ladies. When will we see the government take it seriously? I remember (years ago) a woman baring her naked body to the President showing her scars from abuse and begging him to help her, yet here we are today the country where women are most hated and abused.

Talking about women and the task to protect us, my personal worst, #BathabileDlamini, was finally charged with perjury. This news broke on 24 August and on the 25 August she has Covid-19. This bunch don’t even try to make their rubbish plausible. It is so contrived; it’s a bad American soap opera that would only be carried on SABC1 and even then, only for one season. Can someone call the police to check on that #CovidTest, and while they’re there, can they get that health report on #Ubaba?

Talking about #Msholozi:  I laughed, a real belly laugh, when I saw the post (that I thought was a hoax), with #ubaba is asking the nation to donate to his legal fees. He’s opened a #Capitec account for your donations. That’s the bit that tickled me. We all know that #JZ has eleventeen bank accounts and #Capitec was never one of them. I have so many questions: Jacob, did you ask #Duduzane for help? He has yachts in Dubai and rolls around in private jets.

Did you ask #Dali for a discount? I mean, really, he’s defending all the ANC cronies. Surely there’s a bulk discount for that level of work? Did you call Atul or Ajay? Surely, they owe you buddy! You’ve said many times it was the #guptas, so call Dubai (what happened to that extradition treaty by the way?). Jacob, please don’t insult us by even looking our way for a donation, are you quite mad? And why do you need legal representation anyway? I thought you said it was a “detention without trial”. Surely the state can handle that bit. That will be why you are now still in hospital with your yet undisclosed illness of the #Shaiks and you have the cheek to ask us to pay more? And you use #Capitec?  Do you think we buy that? Really, I shook my head so hard I got a headache.

Speaking of Dali, #Mpofu accused the High Court judges of bias against #Magashule. Roughly the same time that the #EFFPresser told us that judges need to earn our respect and they are not above us. The old Julius came out with fire from his mouth. He said there is no lockdown for the EFF and that they are campaigning hard. For what, Julius? Not one seat in the by-election CIC. Just come out and say it, you, #Floyd and #Dali will be joining #Zuma just like you’ll be joining #AceMagashule as your legal counsel has. Incredible what people will do for money, hey?

The assassination of Babita Deokaran

Then this story broke. #BabitaDeokaran was gunned down outside her home in what can only be described as an assassination.  She was a key witness in the PPE tender fraud debacle and her final chilling words to the #kathradaFoundation was that not all those “in health are corrupt. Some of us are trying but you see how they are dealing with us”.  We do see you, #Deokaran, may your good work continue through others and may justice prevail.

In other news #FeesMustFall #Khanyile was seen in the dock this week as one earmarked as an instigator of the insurrection. David Mabuza has been raised from the Russian rendezvous. #Mokgoro resigned and the big one, #JudgeHlophe faces impeachment for his shuffling of cards during Zuma’s reign. Of course, #BhekiCele congratulated #SAPS for a job well done during unrest and then was promptly exposed without a mask at a birthday bash. There was also a #MeteorShower over Pretoria.  The #ANCStaff have not been paid for ages and are on strike. What does that even mean? The looters can’t pay the looters? #Scamandla!

The “planned” unrest in Durban was postponed, largely because they sent a press release saying they were going to do it. I mean if we hadn’t stopped that one, I think I may have stayed under water permanently. Steyn City gets a helistop for the pesky traffic on Kayalami Corner.  And then just as you felt like you couldn’t put another foot forward, #Nandos came to the rescue. #Scamandla is a creative work of pure genius, if you haven’t seen it and all the spin offs, here it is to enjoy. Thank you Nando’s for always making an untenable situation look manageable to ordinary South Africans and for feeding us against the #RandDempic

That’s more than the government did for our Army who have been waiting for over two weeks for their daily food allowance.

Across the waters, the Paralymics opened, Kanye became just ‘Ye’ and 2021 killed the Stones.  The death of Charlie Watts is a great warning for us, if the Stones go, we all go.

See something beautiful this weekend, I beg of you, remember the beauty of this fine country and its extraordinary people who are above politics and are still filled with tenacity in their political fatigue.

Please check out our YouTube channel for the audio-visual report later this afternoon.