Winds of change at Cannes: Creating an interconnected mobile world 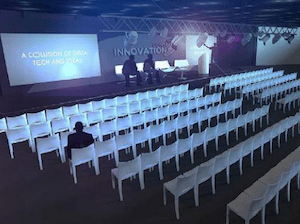 Apart from meeting with clients and partners, as well as honouring the best creative work in the industry, Facebook also unveiled four new offerings to aid in the creation of an interconnected mobile world at this year’s Cannes Lions Festival of Creativity. Michael Bratt chatted to Rob Newlan, head of Facebook’s Creative Shop for the Europe, Middle East and Africa region, to find out more.

The Cannes Lions International Festival of Creativity has kicked off and Facebook has a strong presence at the event, as it has for the past eight years. The festival, says head of Facebook’s Creative Shop for EMEA, Rob Newlan, is where the social media giant looks at challenging the bar for creativity. “And you look at years like this; the excitement around the industry about genuinely embracing the change is coming through, about moving and really starting to craft great work for mobile and what’s the role of how these connected communities can roll out… It’s a really exciting year to be there and you feel the winds of change coming through,” Newlan told The Media Online.

A big focus for Facebook is on mobile and it has shifted from looking simply at the technological side of it, including hardware and interfaces, to exploring the people who are using it, obtaining a better understanding of who they are and what they are all about.

“Focusing on the humanity unlocks the potential there,” Newlan says. And the stats back up the new focus on people and mobile. A billion people access Facebook only via mobile everyday globally, and in South Africa that figure is 13 million monthly. “The connections that these communities provide are that creative inspiration, the creativity that really unlocks those connections through mobile. What we are looking for, for business is the opportunity to create value for people and for themselves,” he adds.

Newlan stresses that mobile content needs to be entertaining, has to have utility, needs to really work in the mobile environment and must hook the viewer in the first three to five seconds. An example he used is that when people watch video on their mobile they often watch with the sound off. So a business has to ensure they tailor their video so that its impact is not negated due to people watching with no sound.

Newlan describes an open and connected world as a really powerful space, with natural opportunities around connections. He uses the recent IEC campaign in South Africa as a great example of work that was interesting, relevant and captivating.

The creative community is also shifting more towards mobile exploration. “We are in a time in which we are really needing to step in and embrace the mobile platforms and be crafting work that really works there,” says Newlan.

Facebook is assisting the connected community by introducing four new offerings to promote creativity and mobile connectivity. The first is a platform called the Creative Hub which allows people to experiment with different creative forms in a mobile environment. Newlan says the platform allows the user “to preview, to evaluate, to showcase ad creative, even simple things like you can mock up work so that a creative director can sign off work on a mobile phone and a client can. Creating these environments where people can share and collaborate together.”

Another new Facebook offering is called Canvas, a platform that allows businesses to tell their stories and showcase their products. It was launched in February and already 100 years worth of content has been viewed on the platform. “Canvas takes out a lot of the backend coding and the heavyweight work that has been required around building beta experiences,” Newlan explains. Canvas uses a combination of videos, still images and call-to-action buttons to showcase content.

The other two new offerings from Facebook, discussed in-depth at Cannes, are Insights API,  an analytics tool that gives campaign planners and creatives insights into their audience, and Slideshow, which allows the user to stitch together still images to form a lightweight video advert.

Another area that Newlan believes will be a big focus at Cannes, where big opportunities and challenges exist is diversity in the creative industry, “how we can make sure we are bringing through fantastic generations of creatives who are able to explore things in new and different and vibrant ways, and they are more producer, director, writer, collaborator creatives”. He praised the Young Lions at Cannes as a productive initiative that will force the industry to challenge and re-evaluate how it operates.

The next big thing for social media?

Newlan highlighted Instagram for morphing from simply a photography platform to being genuinely about expression through great writing and great art. He also emphasised that Messenger needs to be closely watched as it “will be a massive shift forward”. He also touched on how Oculus and virtual reality are big game changers. “I think there are so many exciting opportunities,” he says. “We are early on with so many of them and it’s about how working in partnership with the industry we can really look to challenge the platforms and bring through new and exciting forms of creative.”