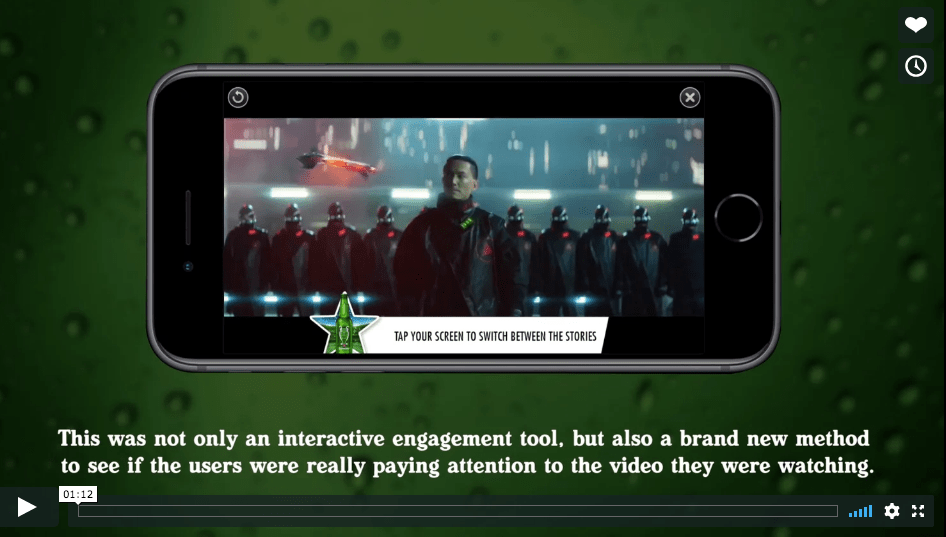 The UEFA Champions League final is the most watched annual sporting event worldwide. The finale of the 2012/13 tournament had the highest TV ratings to date, drawing 360 million television viewers. This emotional frenzy is the heart of the Champions League experience and Heineken® saw the opportunity in this.

In launching the campaign, Heineken’s message was very clear – bringing the thrill of the Champions League to life through a memorable call to SHARE THE DRAMA with friends, and a Heineken® of course. Gaining consumer attention is an ongoing challenge, and globally we have seen how the use of dynamic creativity can increase advertising effectiveness. Heineken®, together with their media agency Red Star (Powered by the Dentsu Aegis Network), via Digital OOH (DOOH) and Mobile Video channels, created real-time excitement and anticipation in the lead up to the Heineken® Champions League matches from the quarter finals onwards. The campaign which went live on 3 April running until 26 May, is a first of its kind in Sub-Saharan Africa.

According to Ilsa Gräbe, communication and engagement manager for Heineken South Africa, “Finding new ways to disrupt in an attention scarce economy means we can cut through the clutter and engage our audiences in a relevant, entertaining and more valuable way.”

The first part of the campaign was driven by Liveposter on DOOH. This campaign featured a dynamic countdown as well as half-time and final score updates that were displayed on multiple DOOH screens (image below). Insights from Liveposter that drove this solution was that globally, there’s a 20% increase in awareness and 50% increase in message recall when viewing dynamic digital OOH campaigns. 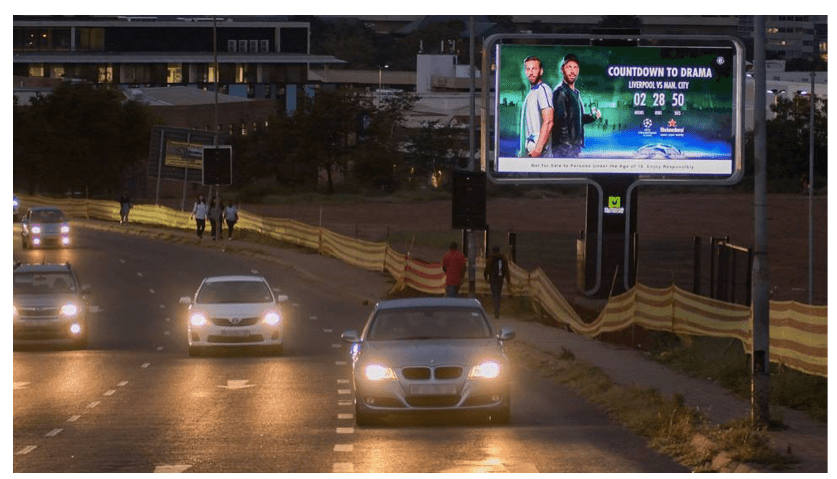 The challenge, for any football fan is that there’s nothing worse than being stuck in traffic whilst your team is playing, unable to partake in the magic and excitement of the game. Heineken®, together with Red Star gave the football fans the medium to keep them in the loop during their frustrating commute, by keeping them engaged whilst commuting.

The Liveposter platform delivered a countdown clock until kick-off on match days, after which it showcased the half-time and final score updates within minutes of the results, to ensure that fans never miss out on the action. Liveposter is the only platform of its kind in Sub-Saharan Africa with the capability to show changing components across several DOOH networks and media owners, which made it the perfect vehicle to deliver this campaign.

This was the first Liveposter campaign in Sub-Saharan Africa. The below images, courtesy of Wideopen Platform, shows the execution of the campaign. 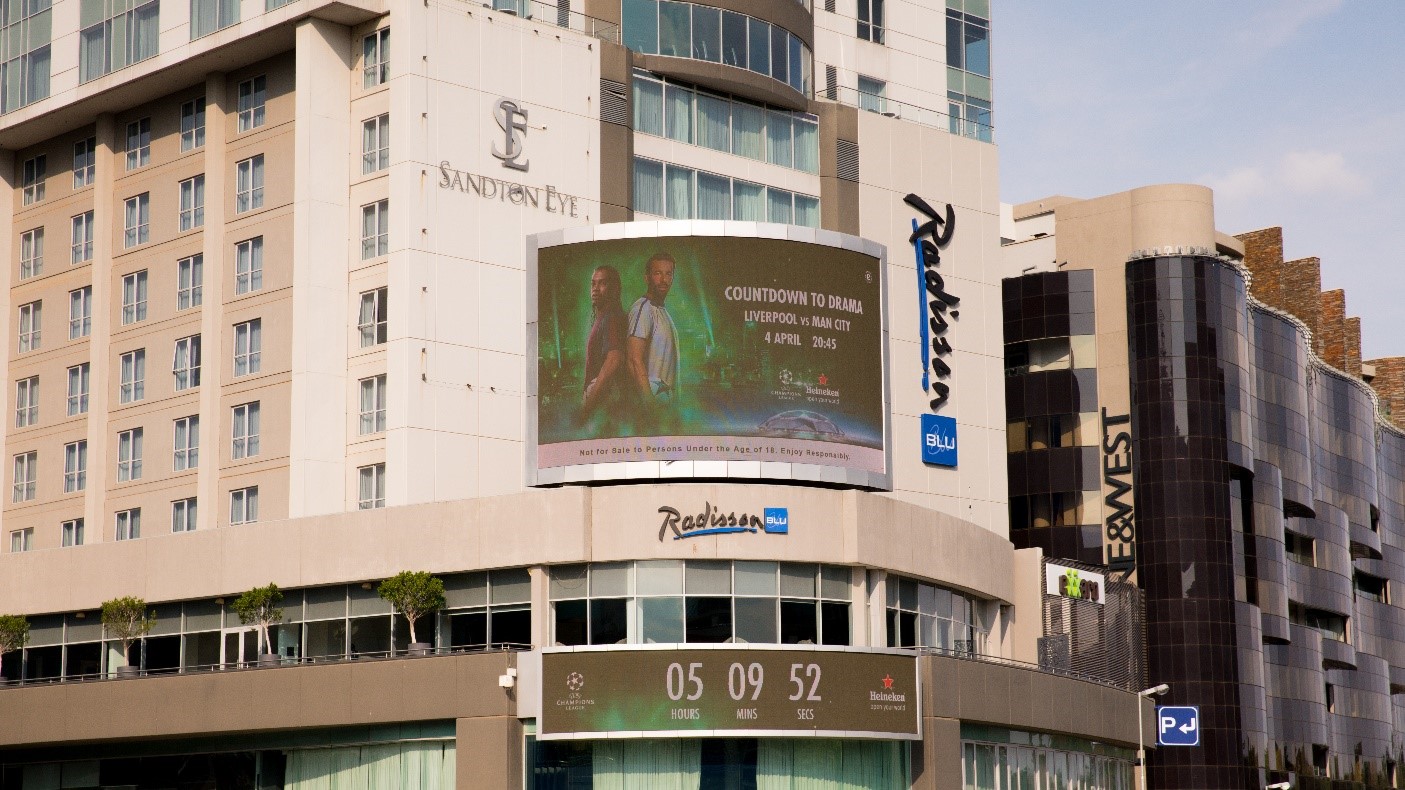 The second part of the campaign, another media first in Sub-Saharan Africa, made use of Mobile Interactive Video with partner Ad Colony to drive high View Through Rates (VTR). The campaign was amplified through market technology called Aurora Video and supported by key media owner partners, Adcolony, who were instrumental in launching this interactive video. The campaign locally had two main TVC 30’ assets which were promoted by the Aurora technology and brought to life within an in-app highly engaged environment, targeting key consumers of the Heineken® market.

How did it work?

Football is a social occasion, it’s a place where fans find a sense of community with their fellow football fanatics. A place where they share their disappointments, excitement and fair share of banter all over social media. What better way to connect football fans than through their mobile phones. Using Facebook, Heineken together with Red Star turned fans to their phones via Mobile Video.

Consumers were encouraged to experience two parallel video story lines of football legends ‘The Wall’ with Ronaldinho and ‘The Chase’ with van Nistelrooy, simultaneously tapping their screens to interchange between the videos, allowing them to create their own stories by deciding which parts they wanted to follow. The mobile phone would vibrate and ‘switch’ between videos on every tap. The premise behind the campaign was that these interactive elements brought about increased engagement which generated higher video completion rates.

This innovation brought about a seamless interaction for the consumer and is continuing to drive high VTR% (which currently sits at 77%).

Aurora Interactive video is a first of its kind technology, which allows for increased engagement for the consumer on video assets. Currently the campaign is achieving a 168% engagement rate which is well above the average engagement of non-interactive video ranging between 2-5%. Mobile video completion rates are usually closer to 10% (with Heineken currently performing at 70%.)

Through using two brand new media firsts in Sub-Saharan Africa, Heineken was able to SHARE THE DRAMA and bring the thrill of the Champions League to life for their fans. Heineken continues to prove that they are at the forefront of innovation and disrupting traditional marketing and media implementation.