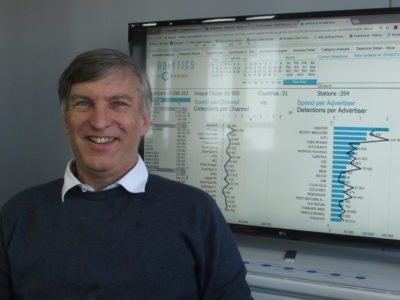 Currently monitoring over 200 television channels in 31 African markets, Media Host is eyeing international expansion of its offerings, starting with Europe.

“The plan is to globalise the business and use South African resources to be very cost effective, specifically for Europe, and Middle East is on the radar, Australasia and South America … Those are the areas we’ve had a lot of interest from for our research,” explains the company’s founder and managing director Mike Smit.

A pilot project has just been completed in Copenhagen Denmark, which monitored 20 television channels from Denmark, Norway and Sweden, and a further 20 channels are being added in Europe

The end-game is to have one centralised dashboard that gives global advertisers a view of their content across the globe.

Media Host archives content from every channel it monitors 24 hours a day, keeping it for three months. The next logical step in the development of the business, with this valuable resource available, is the mining of this data for insights into not only traditional advertising spots, but also alternative means, such as programme sponsorships and product placement.

Artificial intelligence and machine learning is key to this process, as logo recognition and voice to text systems will make it easier.

The final part of the business in development is audience feedback, as opt-in subscribers (who input their personal details) download an app, which relays feedback to the system of what, when and where they are watching.

All these technologies are a combination of international licensed tech and home-grown tweaks and developments. “I’m very into not reinventing the wheel. We’re very strong on integrating and using software APIs and getting the best technologies,” adds Smit.

The media monitoring landscape in South Africa, in terms of advertising compliance, has remained fairly stagnant over the years, with not many new players entering the space. However, there is definitely high demand for this monitoring, which has become a requirement.

Asked to compare South Africa with other African countries in terms of advertising compliance, Smit responds, “South African broadcasters are more trusted than broadcasters in the rest of Africa. The sophistication of monitoring systems we are putting in place has exceeded everything that I have seen on the continent”.

Gathering all the signals and harvesting all the data is a technological challenge. Smit reveals that moving away from data reports to reporting only relevant metrics, is the move that Media Host is making, a method called ‘slicing and dicing the data’.

He identifies upcoming challenges as the future of linear television and the trickiness of monitoring on-demand programming.

The impact of DTT

With digital terrestrial television’s imminent (or not-so-imminent depending on who you ask) arrival in South Africa, Smit clarifies that all it means for the business is more content to monitor and the setting up of more receiver sites. He praises DTT, as he believes it will extend the life of linear TV because it is a lower cost to broadcasters.

Are broadcasters complying with flighting ads?

When asked how compliant broadcasters are with flighting adverts, Smit replies, “Advertising compliance is very accurate, within 2 – 3%, as the broadcasters are getting more sophisticated technologies. Most of the mistakes come from manual capturing in the systems…

The evolution of the business

In the past year, Media Host doubled the number of staff in the company, and now has over 20 major clients.

Going back to the beginning, Media Host started out as a digital courier company, delivering finished adverts to broadcasters through the internet, rather than via tape. Smit admits that “it was too early, as the tech wasn’t ready and internet speeds were too slow”.

“This introduced efficiencies into the production process of advertising. The vast majority of ads are delivered to the broadcasters via Adstream and we keep an electronic copy of the production master and all rights associated to the content are managed through a central repository. So we gave the creative agencies a tool to manage their client’s collateral in a more efficient way”.

“Compliance (did the advertiser get what they paid for), marketing insights (a data warehouse of advertising data) where clients can comb the data for insights, look at what their competitors are doing in terms of advertising. A copy of the creative.”

“It seemed logical to fingerprint the ads, and then record the television channels off air and monitor exactly when the ads are broadcast.”

“A few companies are doing this, but we did it a lot quicker and cost effectively. We took advantage of the latest technologies available and researched global markets to license, integrate and build our own tech to build the most effective knowledge service”.

Media Host is tasked by many of its clients to provide third party compliance affirmation, and Smit explains that the demand for compliance increases, as you go into the rest of Africa.

Focusing on linear radio and television, the company has purchased licenses for all Direct to Home (DTH) platforms available in South Africa from the rest of Africa, and has formed partnerships with multiple companies in other African markets. This is the same for the radio space.

A techie by trade

Smit is no stranger to either the tech space or the media industry, starting his career at the SABC, before founding the first privately-owned television post-production company in South Africa, Video RSA. He then started another business, Video Lab, which he sold, right before creating Media Host in the early 2000s.