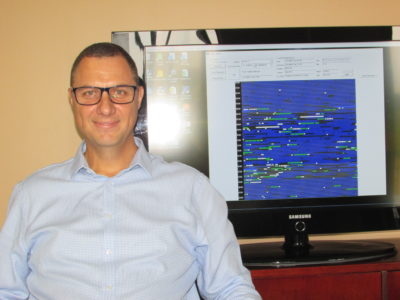 
Data is a valuable commodity in today’s media industry, and the more comprehensive it is, the better. Media monitoring and compliance company AFSTEREO is overseeing a number of South African television channels and radio stations, which provide a wealth of insights.

The company has several unique features, which it believes give the business a competitive edge.“ We are the only independent media monitoring company in South Africa,” explains co-founder Quentin Stewart. “There are many media monitoring companies out there, but they would need some sort of input, either the creative before the time or the logs from the station or having to watermark the audio before they do detections; we don’t,” he adds.

AFSTEREO’s software, Aircheck from MediaMonitors.com, which they have exclusive rights to for the whole of Africa, works on machine learning, where fingerprints are created automatically by the US-patented software. There’s no manual clipping from audio streams or manual input required for anything.

This automation not only speeds up the process, but provides deeper insights into both advertising and music.

Aircheck is used to monitor 2 000 radio stations and 1 000 television channels in the US, a testament to the validity of the software.

AFSTEREO is also the exclusive provider to the South African Music Performance Rights Association (SAMPRA), in terms of tracking music royalties, which further proves the accuracy and reliability of the data provided. The company has been doing this since 2012, and in June last year signed a new long-term deal with the music industry body.

AFSTEREO currently monitors 45 radio stations and television channels in South Africa and Botswana, an impressive feat when it is revealed that the company consists of only 13 people. Another standout feature is that the audio collected from the operations is archived for 18 months.

Recording off transmitter, not streams

In order to ensure maximum accuracy, AFSTEREO records off of transmitters, not streams. This allows for breaks in transmission to be detected, whereas on streams this is not the case. This goes towards the error reporting and compliance certification offering that AFSTEREO has. For every recorder, there are also fail over redundancy machines, guaranteeing uptime for recordings.

This method provides in-depth insights into content across the radio stations and television channels, which AFSTEREO packages in its market intelligence offering. Customised reports are available, which offer comprehensive feedback for clients.

Some radio stations in South Africa do have some compliance issues. “Stations go off air and they don’t know about it, and through our system we are able to alert them to this,” explains Stewart. This is AFSTEREO’s error reporting offering for stations.

“No station can ever be perfect and are faced with unplanned infrastructure, system or transmission issues, outside of their control. For example, a radio station could have an outside broadcast and suddenly experience an ISP issue. But this is exactly where we can help them with their service delivery, through our detailed reporting.” he adds.

“The industry’s set in its ways. Agencies will tell you that technology and data is everything, but they all still use the same tools to generate media plans and post campaign analysis. They struggle to think outside the box … Our data will show stations, marketers, agencies and artists what actually happened, not from logs and 7 weeks old, if you’re spending money on the right platforms or where your songs played,” Stewart elaborates.

Getting through the perception that its compliance product is a policeman product is another challenge facing AFSTEREO. “It’s good for both the station and the client… AFSTEREO is not the policeman, we have all these other services that benefit stations. We are definitely more than just media monitoring and compliance, because we identify and capture every single audio element on radio and TV, our market intelligence data and music reporting are unmatched in terms of accuracy,” he comments.

Stewart is working on a new product, which will allow for radio editorial monitoring. It will plug in to the existing infrastructure that AFSTEREO has, and is currently in its testing phase.

All the data that AFSTEREO gathers is stored in the cloud, not on physical servers. This is more efficient, as capacity and capabilities can be upgraded easier, and is more secure. Back-up systems are in place to ensure that archived data is protected.

Speaking about the company’s employees, Stewart reveals that they found many of them in obscure places, including one who was working as a petrol attendant, and another who was employed by a clothing retailer.

“Some of our employees didn’t know how to use computers before they started working here. We have great staff where some who can speak five, six, seven languages, which is essential for our offering,” he says.

Stewart has always had a passion for computer programming since a very young age. Reading books from the library, he taught himself the basics, before going on to study it at university. He worked as a petrol attendant in his teen years to save up to buy his first computer.

AFSTEREO is a franchise of holding company Gnosko Limited, which was set up by Stewart and his business partner and also CEO of the group, Andrew McFarlane. McFarlane has been in the industry for 30 years with a wealth of experience. Gnosko Limited is based in Mauritius, as it’s easier to rollout operations to the rest of Africa from this location, rather than South Africa, something the company is eyeing in the very near future, and heavily focused on.