News in a minute: Keeping Generation Y informed and engaged in 60 seconds 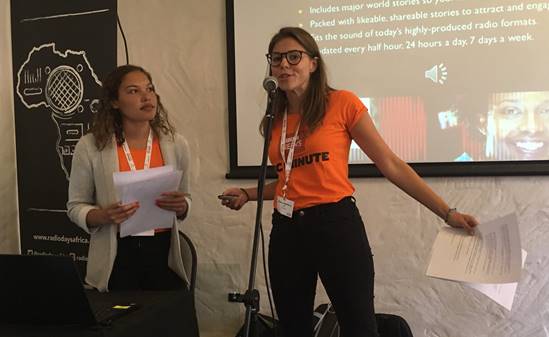 The youth are always in a hurry and consume information at the same rate. Keeping them engaged is a struggle. BBC Minute might have solved this problem by being the only 60 second video and audio news service aimed at Generation Y.

Olivia Le Poidevin and Seren Jones are broadcast journalists at BBC Minute. The pair were on African soil to give an intriguing and insightful presentation at Radio Days Africa, a presentation that emphasised the power that news has and how people-driven journalism can speak to souls of ordinary citizens.

The broadcaster tries to tap into different markets from UK to as far afield as Dubai, Nigeria and Uganda. A study done with Kenyan youths revealed that 76% are hungry for news that can provide solutions to problems; they don’t only want hard news, but news about people in power and empowerment. “Just because news is serious, it doesn’t have to be delivered in a depressing manner,” Le Poidevin explained.

BBC Minute has set a goal to reach over 500 million consumers by 2020. Instead of assuming that they already have consumers, they’ve decided to go find these listeners themselves.

People have a lot in common; we want news that is fast, convenient and we want it to be told by people who look like us. In an impartial, trustworthy and accurate way,” Jones shared.

Being “woke” is the awareness of the social justices and injustices happening in your community, taken from the popular African American expression, “stay woke”. This is exactly who BBC Minute is trying to address.

“This generation wants to be told things that they didn’t know before, they want to be engaged in things that are driving the world apart but also bring it together. It is not the lack of appetite for news, but how we bring it in a way that younger people can relate to,” they said.

BBC Minute is an operation that runs like clockwork, with news bulletins like no other, “We produce five bite size stories that are completely relevant to our audience,” Le Poidevin explained.

They are careful about how they write their stories, so they don’t come across as boring. Starting with softer, trend-based news is what draws audiences in, followed by the more hard hitting ones. The bulletins are 60 seconds because people’s attention span is very short and there are always two presenters giving the bulletin.

“The main challenge of a minute, especially presenting bite sized stories, is making sure you don’t cut out relevant information and that the main information stays,” Jones explained.

In the war against boring news, the two have to follow a certain set of their own rules in an attempt to get young people excited about the news. The hosts have lived by a three letter acronym called ‘AII’ which helps them stick within BBC policies, while at the same time delivering news in a stylish way. The acronym stands for the following:

A – Accurate. Check, check and check again and get somebody else to fact check for you. Get your editor to check.

I – Informative. What’s the point of listening to the news, if you’re not going to learn anything from it?

I – Interesting. If it’s not interesting, young people are turned off by it. Being interesting is also about delivery and being energetic.

The difference between a good story and a bad one is how many people it resonates with. News should sound like a conversation with your friend.

The internet has brought people in different pockets of the world together. There is now a special relationship between different countries that have embraced BBC Minute. Interestingly, the programme has more male viewers than female ones, proof that men are interested in stories about women.

Le Poidevin and the team use social media as a source of information and to connect with people. On a trip to Dubai, they came across a young plus-size model wearing a hijab through Instagram. She initially reached out to them as a fan of their work. The crew met with the model and brought their cameras along, a brief conversation was had and later, turned into a 10-minute short film scheduled to be broadcast across the BBC at the end of this month. This type of work will become an ongoing thing.

Being millennials themselves, Le Poidevin and Jones are trendy, social media savvy and have a diverse team, which makes their work unique and contributes to the type of journalism they do. “In terms of getting personality across, news doesn’t have to be boring, our bulletins are fun,” they stressed.

While in South Africa they were pleasantly surprised at the optimistic outlook the people here have. “The country is very young and the youth have a really great work ethic and want the country to move forward,” said Le Poidevin. “The market is diverse, but segmented in a way, there is a lot of space for conversation among young people about issues such as sexuality, race and education.”