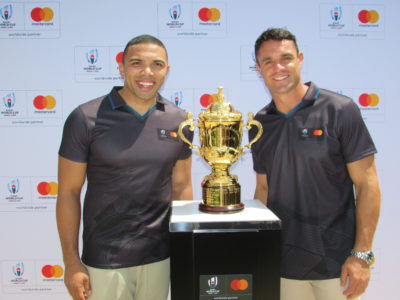 Getting closer to consumers and authentically engaging with them are the key goals of Mastercard’s campaign in the run up to the 2019 Rugby World Cup.

To achieve this, the global financial services company is using brand ambassadors and tons of activations both before and during the much anticipated sporting showcase.

“Our main objective is to be closer to consumers based on their passions. We know that sport is definitely one of the most relevant passions across the globe. Within that, we define which are the most relevant sports according to the different countries,” explains Beatrice Cornacchia, senior vice president for marketing and communications, Middle East and Africa, at Mastercard. “In South Africa, we know that rugby is among the top three most popular and famous sports.”

Mastercard chose brand ambassadors as a marketing strategy because “humans are the best way to talk about a brand” and “Mastercard was looking for the best when it came to choosing representatives” (meaning the best at their sport and a role model who shares the same values as the brand), adds Cornacchia.

And they certainly got the best, with South African rugby legend Bryan Habana being named as the most recent ambassador.

“When you get the opportunity to become an ambassador, a lot of times the brand is looking for authenticity. Yes, you come with a credible track record and a CV that’s really good to look at. But when you start being a part of campaigns you’re immersing yourself in the brand’s values and you fully understand and realise that what they’re looking for is not a face, someone to stick up on a billboard and say he’s associated, but someone whose involved with the brand,” comments Habana.

Asked about the activations planned for before and during the World Cup, Carter replies, “It’s really about connecting with the fans. It’s a pretty unique event having the Rugby World Cup in Japan, so the events are all about the fans. We’re bridging that gap between the players and them, and creating priceless moments for them.”

Touching on the rollout of the campaign in South Africa, Kirsten Wood, director of area marketing, Southern Africa, at Mastercard, reveals, “One of the biggest focuses we have for 2019 is consumer marketing. We are filming Priceless Surprises, whose content we will use in the run up to the World Cup. We are also doing a number of campaigns with our banking partners and strategic merchant campaigns with retailers, giving consumers an opportunity to create a priceless moment themselves.”