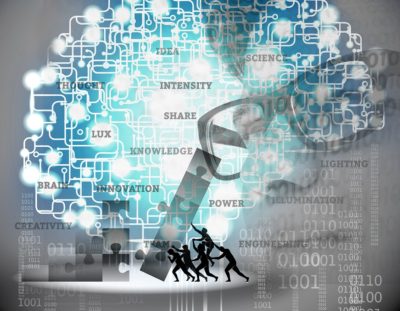 This automation software makes content generation – based on regular, standardised-format datasets, quicker and easier – with the added benefit of outputting in any pre-set language. The data is automatically handled using pre-determined and pre-set narrative templates and parameters, which also includes the functionality of changing wording from story to story.

From humans to machines

Data management is about collecting data and converting it into information for internal or external stakeholders. That, until now, has been done through visual, analytical tools as part of augmented intelligence interpretations related to human experiences, such as dashboards and/or graphs and graphics.

Data comes into the environment, people take hold of it and then they have to spend time analysing it and converting it into narratives.

“It was becoming clear that the majority of organisations struggle to handle and deal with the volume of data coming in. The essence of communication is quite clearly with the majority of people in organisations, and outside of them that want to understand information that they want to do so in narrative format,” comments Alfonso.

Alfonso is working with Genware, the company that has distribution rights for US company Automated Insights’ NLG software, called Wordsmith, in South Africa, to drive adoption of this tech in the country.

“Seeing so many media organisations struggle with data, and getting journalists to create insights from it, you’re ending up with newsrooms with large volumes of people spending an inordinate amount of time creating narratives… NLG speeds up the process with 100% accuracy,” he says.

All the basic dependents of a story – the what, where how, and when – are covered by NLG, leaving the journalist to only cover the ‘why’ aspect, which, in Alfonso’s opinion, is vital to retain the human connection. Machines have not reached a level yet where they can analyse why, only reporting facts.

The benefits of NLG

1. Increased efficiencies – people don’t have to spend time managing mundane and repetitive data, and it creates easy-to-understand narratives from large and complicated datasets

2. Personalisation – based on a person’s personal data, you can personalise direct communication in either long or short form and in different languages

This technology is rapidly being incorporated, not just in South Africa but around the world. According to Alfonso, the Associated Press has increased its monthly financial reports output from 300 to over 3 000 using NLG tech, and two of the biggest media companies in South Africa have also started using it.

A project in a Northern Cape municipality also provides a practical case study. The mayor of the region had a problem with counsellors in some towns not understanding basic municipal communication principles on dashboards. The NLG tech put in place created easy-to-understand narratives aside from all the graphs, in both English and Afrikaans.

Asked about the affordability of NLG (as many times in the South African market tech is just too expensive, when compared to other markets), Alfonso reveals that “for the cost of one or two people in an organisation, you can find a solution that replaces 20-30 people further down the track. Though it depends on the scale of the organisation”.

The Forbes Technology Group named NLG tech as one of the game changers in augmented intelligence in the next two years in business, so it is definitely worth keeping an eye on in the media space.