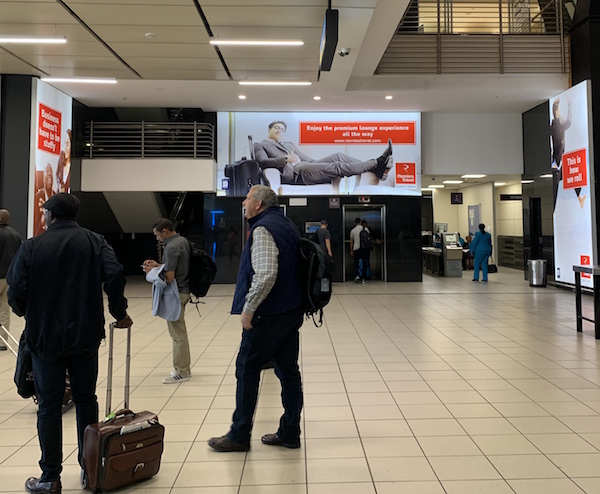 The construction, renovation and revamping of many airports across Africa is creating more valuable spaces for advertising opportunities.

A number of huge upgrade projects are happening at airports across the continent at the moment.

At last count, five African countries recently built new airports, and eight countries are currently busy with or have already commissioned the construction of new airports.

These developments are creating more opportunities for brands to market their goods and services to a captive audience, which is generally on the upper end of the socio-economic measure (SEM) scale, has disposable income on hand and is in a receptive state of mind.

“The revamping and upgrading of airports across Africa allows for the de-cluttering and sophistication of environments within airports to make advertising more impactful,” comments Lyn Jones, regional manager for In Touch Media. “Advertisers are more likely to place their messages and content in a streamlined and clean environment, which reflects well on their brand. High impact digital formats are replacing static sites, and digital TV and niched networks across environments and countries are now available.”

Jacques du Preez, managing director of Provantage Media Group (PMG), adds, “Airports are more and more dependent on non-aeronautical income streams and therefore advertising revenues are becoming more important. With the large number of new airports being constructed in Africa, we have seen a rapid growth in advertising revenues,” he says. “This is also driven by the introduction of digital media formats in these airports. Because African airport infrastructure was lagging behind the rest of the world, we believe that advertising revenues will grow much faster than in developed markets, as brands want to be present at the new airports.”

Like other out of home advertising mediums, the popularity of digital is growing in the airport spaces. Digital offers clients “the opportunity to run more innovative campaigns,” explains Theresa Horn, owner at Khombisa Media, “as well as opening up the airport space to a wider market as they offer a more economical way to update campaigns and shorter lead times”.

But this does not mean that strategically placed static media is dying, in fact it’s an ongoing success. However one reality is that clients are booking shorter campaigns. Never before have we received as many one-month campaigns. The average used to be three-month campaigns and greater,” says Dave McKenzie, CEO of BOO! Media.

According to Primedia Outdoor, which has a presence at nine airports in four African countries (Botswana, South Africa, Zambia and Zimbabwe), there is a higher demand for static opportunities in airport advertising.

They add that one of the factors that has an impact on airport advertising is the “extremely niche market” that advertisers are speaking to, which will only relate to certain brands, and secondly, client budgets.

Activations in airport environments where there is high ‘dwell time’ after check-in are also popular and effective. But Jones cautions, “Brands are competing with the air traveller’s state of mind, and the time they have available. Activations that entertain or provide value tend to hit the mark best.”

A major marketing growth area at airports is branded services. Examples are branded lounges, wi-fi and data services, restrooms, and refreshments. “Matching your brand with a relevant need at an airport can lead to incredible brand affinity with passengers,” says Du Preez.

Airport environments can be a bit restrictive when it comes to advertising, as the landlord has to approve the space, particularly with activations. But Du Preez strongly believes that there is still a lot of room for creativity and the integrated use of all the various media touch points at airports. “Media owners, brands and airport authorities, however, need to work together in creating more memorable brand experiences for passengers.

“We need to surprise passengers and enhance their journeys by bringing brands to life at airports and I don’t think we are creative enough. Half the problem is that brands and their agencies do not understand the airport environments or the various airport media types on offer well enough and this leads to a one-size fits all approach. Creativity requires hard work and is most certainly possible at airports.”

Horn adds that airports are encouraging creativity and innovation “provided it does not affect how the airport operates. The safety and flow of passenger traffic as well as the overall passenger experience is the first priority for the airport owners”.

Passenger numbers on the continent are on the rise. According to the International Air Transport Association (IATA), Africa is set to become one of the fastest growing aviation regions in the next 20 years with an annual expansion of nearly 5%.

IATA statistics show that passenger traffic, including all domestic and international traffic across all of Africa’s commercial airlines on the continent has increased on average by 5% year on year for the past six years. A 4.3% increase was recorded for the first quarter of this year (2019).

A prime example of growing airline travel in Africa is air traffic between China and the continent, which has jumped 630% in the last decade. An article from the business publication Quartz Africa notes that Chinese firms have been bidding on and winning infrastructure projects in Africa, including airports: “Chinese firms have helped build airports in Kenya, Mali, Mauritius, Mozambique, Nigeria, the Republic of Congo, Togo and Sierra Leone, among others in recent years”

The work being done at African airports is not stopping anytime soon. The next big one is a revamp of Cape Town International Airport. “This massive project, due to commence early 2020, has been planned in stages and will take approximately five years to complete,” says Horn. “The revamp has been planned to improve the passenger experience and flow within the airport, but the team is also working closely with ACSA Advertising and has made provision to include advertising opportunities within the new layout.”

Michael Bratt was until recently a journalist with The Media and The Media Online. He recently took a job with Huawei SA. He has a Bachelor of Journalism degree with a Master’s from Rhodes.