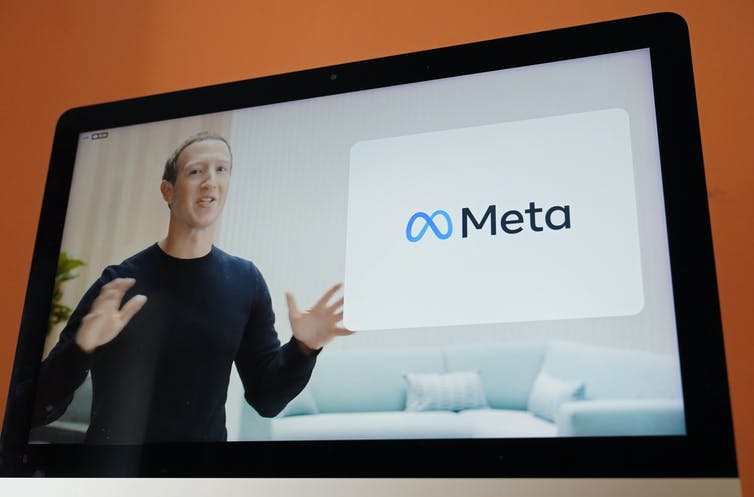 Facebook chief executive Mark Zuckerberg has announced the company will change its name to Meta, saying the move reflects the fact the company is now much broader than just the social media platform (which will still be called Facebook).

The rebrand follows several months of intensifying discourse by Zuckerberg and the company more broadly on the metaverse – the idea of integrating real and digital worlds ever more seamlessly, using technologies such as virtual reality (VR) and augmented reality (AR).

Zuckerberg said he hoped the metaverse will be a new ecosystem that will create millions of jobs for content creators.

But is this just a shallow PR exercise, with Zuckerberg trying to reset the Facebook brand after several scandal-ridden years, or is it a genuine bid to set the company on course for what he sees as the future of computing?

Facebook’s journey into the metaverse

What’s not in contention is that this is the culmination of seven years of corporate acquisitions, investments and research that kicked off with Facebook’s acquisition of VR headset company Oculus for US$2 billion in 2014.

Oculus had risen to prominence with a lucrative Kickstarter campaign, and many of its backers were angry that their support for the “future of gaming” had been co-opted by Silicon Valley.

While gamers fretted that Facebook would give them VR versions of Farmville rather than the hardcore content they envisioned, cynics viewed the purchase as part of a spending spree after Facebook’s US$16 billion stock market launch, or simply Zuckerberg indulging a personal interest in gaming.

Under Facebook, Oculus has gone on to dominate the VR market with over 60% market share. That’s thanks to heavy cross-subsidisation from Facebook’s advertising business and a console-like approach with the mobile ‘Quest’ VR headset.

Beyond Oculus, Facebook has invested heavily in VR and AR. Organised under the umbrella of Facebook Reality Labs, there are nearly 10 000 people working on these technologies – almost 20% of Facebook’s workforce. Last week, Facebook announced plans to hire another 10 000 developers in the European Union to work on its metaverse computing platform.

While much of its work remains behind closed doors, Facebook Reality Labs’ publicised projects include Project Aria, which seeks to create live 3D maps of public spaces, and the recently released Ray-Ban Stories – Facebook-integrated sunglasses with 5-megapixel cameras and voice control.

Read more: Ray-Ban Stories let you wear Facebook on your face. But why would you want to?

All these investments and projects are steps towards the infrastructure for Zuckerbeg’s vision of the metaverse. As he said earlier in the year:

I think it really makes sense for us to invest deeply to help shape what I think is going to be the next major computing platform.

The metaverse may eventually come to define how we work, learn and socialise. This means VR and AR would move beyond their current niche uses, and become everyday technologies on which we will all depend.

We can guess at Facebook’s vision for the metaverse by looking to its existing approach to social media. It has moulded our online lives into a gigantic revenue stream based on power, control and surveillance, fuelled by our data.

VR and AR headsets collect enormous amounts of data about the user and their environment. This is one of the key ethical issues around these emerging technologies, and presumably one of the chief attractions for Facebook in owning and developing them.

What makes this particularly concerning is that the way you move your body is so unique that VR data can be used to identify you, rather like a fingerprint. That means everything you do in VR could potentially be traced back to your individual identity. For Facebook – a digital advertising empire built on tracking our data – it’s a tantalising prospect.

Alongside Project Aria, Facebook launched its Responsible Innovation Principles, and recently pledged US$50 million to “build the metaverse responsibly”.

But, as Catherine D’Ignazio and Lauren Klein note in their book Data Feminism, responsible innovation is often focused on individualised concepts of harm, rather than addressing the structural power imbalances baked into technologies such as social media.

In our studies of Facebook’s Oculus Imaginary (Facebook’s vision for how it will use Oculus technology) and its changes over time to Oculus’ privacy and data policies, we suggest Facebook publicly frames privacy in VR as a question of individual privacy (over which users can have control) versus surveillance and data harvesting (over which we don’t).

Critics have derided Facebook’s announcements as “privacy theatre” and corporate spin. Digital rights advocacy group Access Now, which participated in a Facebook AR privacy “design jam” in 2020 and urged Facebook to prioritise alerting bystanders they were being recorded by Ray-Ban Stories, says its recommendation was ignored.

Is the internet a blueprint for an open metaverse?

But it doesn’t have to be this way. Tony Parisi, one of the early pioneers of VR, argues we already have a blueprint for a non-dystopian metaverse. He says we should look back to the original, pre-corporatised vision of the internet, which embodied “an open, collaborative and consensus-driven way to develop technologies and tools”.

Facebook’s rebrand, its dominance in the VR market, its seeming desire to hire every VR and AR developer in Europe, and its dozens of corporate acquisitions – all this sounds less like true collaboration and consensus, and more like an attempt to control the next frontier of computing.

We let Facebook rule the world of social media. We shouldn’t let it rule the metaverse.