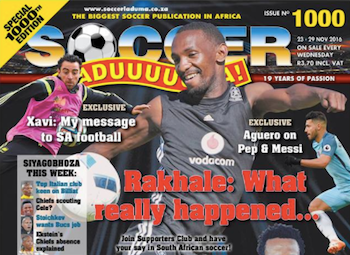 For 21 years Kick Off and Soccer Laduma were fierce sporting rivals, so when Kick Off was brought into the Ads24 stable, and it was decided that the titles would share an office, it was a bit like asking Barcelona to share a dressing room with Real Madrid.

A year later, however, and the two teams have found that their fierce passion for ”the beautiful game” has resulted in a cohesive goal – to offer South Africa’s sporting public, the best possible coverage of football across print, podcasts, social media and digital television and copy platforms.

“Our primary focus is to ensure that there is no duplication of content in what we do. With print the paginations of the publications are available for both editorial teams to look at. Similarly with the digital platforms, there are two separate editorial teams for Soccer Laduma and Kick Off, but with full view of what the other is doing, so duplication is avoided at all times,” says Clint Roper former editor, and now head of content marketing for Soccer Laduma.  “Soccer Laduma founder, Peter du Toit, oversees the process for both titles, which ensures original offerings that captivate across audiences.”

The result has been a win-win for both titles. In 2018, Soccer Laduma has retained its title as the biggest single-copy sale weekly in the country by some margin. Meanwhile, Kick Off has tackled a tough economy to emerge victorious, achieving growth of 50% in just one year.

A field of opportunity for advertisers

These days clients are looking for 360 degree content solutions for their campaigns. The weekly frequency of Soccer Laduma seamlessly allows campaigns that incorporate digital and print element that need to correspond with a specific date or event. Meanwhile, Kick Off has the glossy appeal that speaks to certain brands and allows a consistent print presence.

In addition there have been some exciting developments:

·        Soccer Laduma and Kick Off will both be re-launching their web and mobi sites in August/September this year. The new-look sites harness the best of technology to put user experience first, while the new designs cater for advertisers who want to reach the titles’ audiences seamlessly.

·        Soccer Laduma podcasting was launched in October 2016 and continues to make waves. The popular podcast took just two months to hit the 1-million mark in overall downloads. Since then it has settled, but continues to be one of the highest performers in the South African podcasting market with over 10-million downloads to date, at an average of 50 000 per show. For advertisers it offers opportunities for show and platform sponsorship to an extremely engaged audience.

·        SLTV has also been re-launched with a new strategy to offer tailored content to meet specific community needs. This is an exciting new option for advertisers to explore Soccer Laduma content ecosystem.

The launch of soccer kits for the season ahead is always of great interest to fans of “super clubs” around the world, and it’s no different in South Africa. Recently, Puma sat down with Soccer Laduma and Kick Off to implement a successful kit reveal campaign.

The launching of new soccer kits for the season ahead is of huge interest to fans of ‘super clubs’ around the world, and it is no different in South Africa. Most recently Puma was able to sit at the same table with Soccer Laduma and Kick Off to implement a kit reveal strategy which made use of the print publications’ covers as well as their digital and social media platforms. By working with both titles at the same time, Puma ensured that there was no duplication and that the execution was amplified across both titles for maximum impact among South African soccer fans.