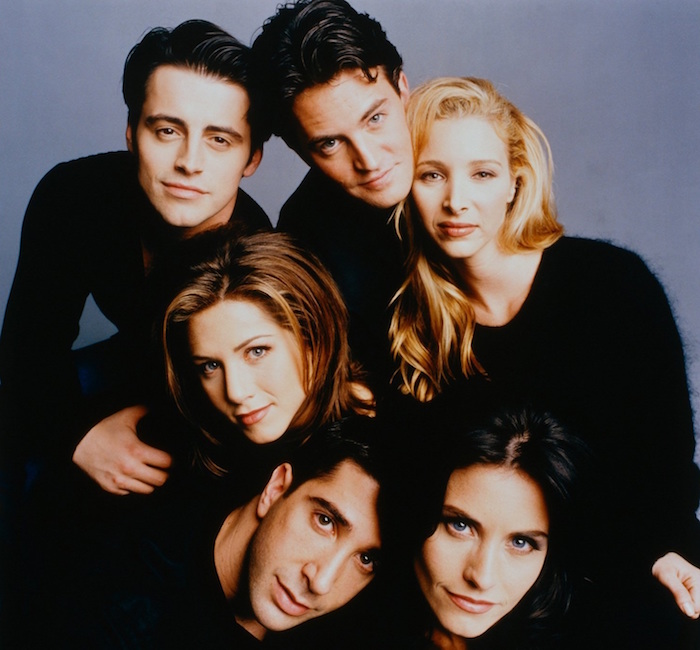 [COMMENT] Due to a bizarre and seemingly irreversible Telkom administrative glitch, I am unable to get fibre or even a VDSL line laid to my townhouse unit.

As a result, I have not been able to join that select 7.3% of South Africans who are able to feast on the smorgasbord of content offered by video streaming services such as Netflix and Showmax. (This figure excludes YouTube viewing).

I have had to endure more than my fair share of FOMO as friends have shamelessly bragged about the gastronomic delights of Chef’s Table and the riveting brutality of Narcos. In an attempt to not appear to be irredeemably ‘last decade’, blind to a great deal or a luddite, I find myself explaining how my passion for watching tennis makes my continued support of DStv’s Premium package a necessity.

This, together with my trusty Explora, has, nevertheless, enabled me to enjoy many of the fruits of the ‘second (or third) golden age of television’ such as Mad Men, House of Cards, Orange Is The New Black, and The Crown. Lavish budgets lured Hollywood talent to the small screen, where they found they were no longer bound by the old conventions of genre, subject matter and language nor by the rigid formulas of the episodes and series of broadcast TV.

Bingeing became the new viewing phenomenon. In 2013, the now disgraced Kevin Spacey delivered the MacTaggart lecture at the Edinburgh Television saying, “The audience wants control. They want freedom.” He argued that the industry should give audiences “what they want, when they want it” and “if they want to binge, then we should let them binge”.

Fortunately for me, DStv Catch Up somewhat constrained my ability to binge on the “complex, smart stories” Spacey said the audience wanted. But the result of the race to win in the streaming space was not ultimately quality, but quantity. Last year, at the Television Critics Association summer press tour, FX Networks CEO John Landgraf declared that the “Golden Age” had turned into “The Gilded Age” and pointed out that it is “increasingly difficult to keep up with the insane volume of new and returning series”.

I have to admit that the challenge of navigating my way through oceans of Netflix content has always seemed slightly daunting to me and that I have, at times, felt secretly relieved that I do not have to devote time and energy to making those choices. Perhaps Netflix have cracked their recommendation system, but my years of experience of Amazon’s Kindle algorithm have left me seriously underwhelmed.

Thus, I was intrigued by a headline in The Guardian yesterday, which read ‘The age of comfort TV: why people are secretly watching Friends and The Office on a loop?’ The article referred to data from an analytics firm called Jumpshot, which it says is one of the best guides to what is popular on the platform in the US, (remember Netflix doesn’t release viewership figures) which showed that the most viewed series are from the old, more formulaic era of TV. 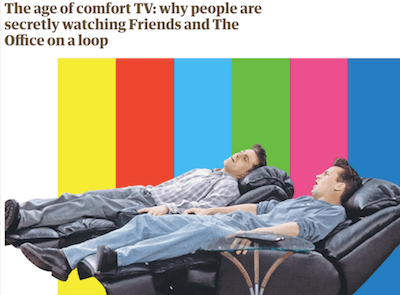 Out of the top 10 ranked shows only two are Netflix originals, indicated in italics: The Office (US), Friends, Parks and Recreation, Grey’s Anatomy, New Girl, Supernatural, That ’70s Show, Criminal Minds, NCIS, Arrested Development. The article goes on to suggest that “most of us still want to watch half-hour shows about vaguely likable people in which everything turns out OK. Ideally from the ’90s, but maybe the ’00s. And preferably something that we have seen many, many times before”. It supports this statement with quotes from viewers who talk about “the warmth and comfort” that they get from shows they have seen many times before, and the “reassuring worlds with low jeopardy and known outcomes”.

It is also a way to escape social media pressure: “I find it more relaxing to rewatch, as I don’t have to join in on the hot takes and social threads that surround the ‘big new series’ or worry about spoilers… I can create a little bubble and totally tune out.”

The article goes on to cite Matthew Ball, a US venture capitalist and commentator on the streaming platforms, who argues that while Netflix’s expensive high profile experimental shows may drive subscriber growth and branding, its main success is due to it “enabling audiences to easily watch large volumes of all types of content wherever they are, without fail, and at a low cost” or “tonnage” as he names it.

If “tonnage” is what it is all about, then a tipping point is imminent as Netflix will lose top viewed programmes such as Friends and The Office as their owners launch their own streaming platforms. DisneyPlus is launching in November in the US and Apple is also due to launch its streaming service then. The CBS and Viacom merger will doubtless mean that they will be developing a new streaming strategy. If audiences default to lean back comfort viewing, then it has to be the legacy media that have the advantage.

Having spent some decades working in media agencies, Britta Reid now relishes the opportunity to take an independent perspective on the South African media world, especially during this time of radical research transformation.