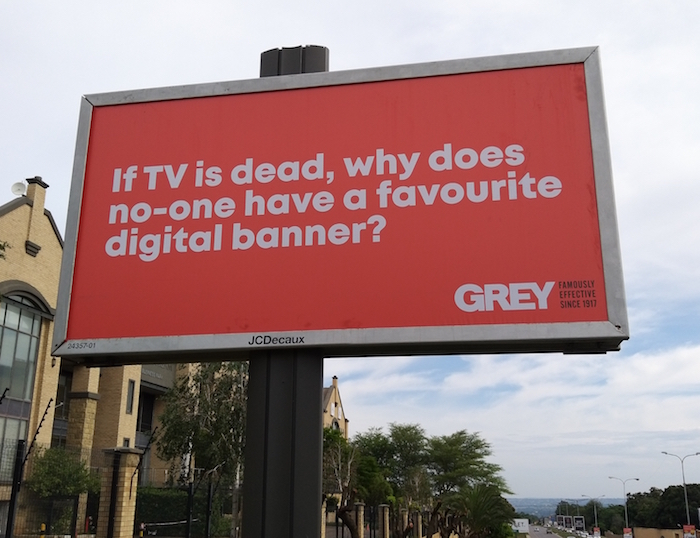 Grey Advertising decided to heed its own advice and scale up its advertising spend during the deepest recession the world has experienced in modern history.

Grey launched a new campaign this week to market itself to potential clients and future talent, and at the same time encourage brands to be bold in their marketing as the country eases out of lockdown and recession.

“I doubt there’s an advertising agency in the country that hasn’t had to deal with clients cutting budgets in the months following our first descent into lockdown. Ad spend plummeted across almost every category and brand building initiatives ground to a halt, despite all our advice to the contrary” said Paul Jackson, CEO of Grey Advertising Africa.

In the subjective world of advertising, the argument around whether to advertise or not during a recession is probably about as close as we’ll ever come to a ‘settled’ debate or to anything resembling an indisputable fact. There’s over a century of research and evidence all pointing to the benefits of advertising during a downturn and, consequently, to the negative effects of ‘pulling’ advertising during such a period.

Unfortunately, this evidence seldom gets an airing beyond the desks in the planning department, so few see the argument and its ‘obvious’ truths. Instead, an agency’s recommendations are often seen as self-interest rather than impartiality.

“So, we decided to see for ourselves; to put some skin in the game,” Jackson said.

“Armed with the current research from the Scopen Agency Study, detailing exactly our brand’s strengths and weaknesses relative to our competitors, we set ourselves some marketing and advertising objectives and wrote ourselves a creative brief, just the same as we would for any other brand in our portfolio.

“The out of home adverts you’ll see for our own brand on JCDecaux billboards strategically placed around Joburg to catch the eye of clients and agency staff, are the product of the same creative processes, the same reviews, the same budgetary constraints as we experience on all brands. We’re doing for our own brand exactly the same as we do for our client brands on a daily basis.

“Will people like the campaign? Some will. We think the boards are, if nothing else, amusing and a bit of playful rivalry with other agencies.”

“Will people hate the campaign? Some will. Without a doubt. This is advertising after all and, if you haven’t yet learnt that trying to please everyone is a mug’s game, you might want to reconsider your career choices.”