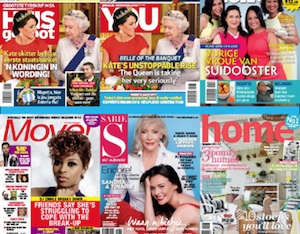 Media24 recently gathered editors from many of its magazine titles to reveal the top trends they are expecting this year.

The trends not only refer to their readers, but also what is going to be driving their editorial choices in 2016. Michael Bratt attended the event to discover this year’s big trends.

The rainbow honeymoon is over. Just like any other media house out there, Media24 started the discussion by reiterating the tough economic conditions brands are facing. The first trend identified was, ‘The rainbow honeymoon is definitely over’. But, for the editors, surprisingly it seems their readers are tired of reading about all the hardships. SARIE editor, Michelle van Breda, commented, “More positive content will be coming through in a balanced way… Pessimism is not the way, it’s a dead end street… consumers can improve their lives by linking up with positive content.”

Consumers are downscaling. But despite planning to introduce more positive content into their publications, stepping away from depressing news, the editors did admit that the reality is consumers are downscaling. This was the second trend they talked about. Consumers are spending more wisely and are prioritising more on what they pay their hard earned money for. Kuier editor Kay Karriem explained that Media24 has identified a simple way to counter this. “All consumers are concerned about money and are cutting back. The word for this year is value, making sure we provide value for money.”

Eco=friendly. The third trend the editors discussed was eco = friendly. They explained that more and more now consumers are focusing on and are concerned about eco-friendly products. As Tuis/Home editor Wicus Pretorius put it, “People are really thinking about considering the planet, not just survival. Eco-friendly is a growing trend… self-sustainability is the absolute luxury of our time.

Great storytelling. The fourth trend touched more on the approach to editorial strategy that Media24 will be utilising this year. To counter and build on the three trends above, the group will be focusing on great storytelling. Huisgenoot editor, Henriette Loubser, said, “The ability to read our market and the ability to do gripping storytelling are the keys to Huisgenoot’s success.” And what a success Huisgenoot is. The magazine has the highest circulation in South Africa, with a figure of 245 388.

The editors touched on new challenges which their magazines and they themselves are facing, including social media, video content and the ability to tell stories across multiple platforms.

Search for authenticity. The fifth trend discussed, The search for authenticity, is an illustration of what Idees/Ideas magazine is doing right. Its editor, Terena le Roux, explained how many consumers would rather spend their money on experiences than products. Hence the magazine title frequently hosts retreats, which most of the time are sell-outs. She attributes this to a new mindfulness movement, where “people are realising they need to be in the moment where they are now”.

Mind the gap; what gap? The sixth trend had the audience buzzing as many people realised they had never thought about this fact before. Titled, ‘Mind the gap. What gap?’ the editors stressed that the gap between generations is closing more and more, creating a shared way of thinking as they talk more and share more. TRUE LOVE editor, Dudu Mvimbi Leshabane, explained that this has created a problem for publications as, “You can’t alienate the old readers who are loyal. But you can’t alienate new readers who are younger.”

Buying your kids a future. Building on what Mthethwa said, the eighth trend identified was, ‘Buying your kids a future’.  Not only does this refer to ensuring a proper education for them, but as Karriem said, “Creating an experience for your kids of fitting in”. Parents also want to enhance their children’s education through media, something which YOU editor, Linda Pietersen, says her magazine is doing well by including an education section in every issue.

Facebook is our friend. The ninth and tenth trends spoke to the emergence and prominence of new content platforms, specifically Facebook and mobile. Titled, ‘Facebook is our friend’ the benefits of the ninth trend were explained by Men’s Health editor Jason Brown, “Facebook is a part of our editorial strategy. It is immediate and allows us to gauge the temperature of our audience on stories and issues.” Other editors said, it allows for an ongoing conversation with readers and is a great place to find creative contributors. Touching on the tenth trend of mobile, Van Breda said, “Mobile has freed our readers from the pages of the magazine and it’s immediate and we can interact with them”. The strategy has worked with 65% of SARIE’s website audience coming to the site via mobile.

The personal touch. The eleventh trend is almost the opposite of the previous two ones. Named as, ‘A personal touch in a digital world’, Van Breda stressed, “Living in this world can be lonely and isolating. The human touch is becoming a rare commodity and it’s an important tool to connect with the market”. The message being, that despite all the digital developments, the best engagement is still physical, face to face contact.

The last five trends relate to the type of content that Media24 magazines will be focusing on this year. They are:

Health is the new wealth. Fit is the new rich.  As Brown and Women’s Health editor, Danielle Weakley, explained, “Health has become the new mainstream, the new measure of success.” But the editors cautioned that content must focus on the preference of instant gratification rather than a long term result, which is what most readers choose.

The Big Beauty Buzzword. Weakley explained that consumers simply don’t just want to know about beauty product specials. They want to know where their products come from, whether they are eco-friendly and the process of how they are made and where their ingredients come from. van Breda summed it up by stating, “Beauty is a very different face now, than in the past”.

Homemade is better and home chefs.  These two have been grouped together because they have a clear link. With the first one, the editors explained that more people are turning towards entertaining at home, rather than going places and when they entertain they are bringing digital and social media into their home made entertainment. This also extends to their culinary choices, preferring instead to cook at home than go out to restaurants. With tough economic times, combined with the rise of celebrity cooking shows, Karriem explained, “The kitchen is where a woman can fully and truly express herself and become a champion”. Brown added, “The kitchen is the new garage for guys. And this fits in with the healthier lifestyle trend we are also seeing.”

Hair! Mthethwa explained the reasoning behind this topic focus. “Hair is very important for black women. Lots of time and money is spent on hair and hair products”. But it is not only women who are interested in this topic. The editors said interest in male grooming is also starting to become more prominent.

If you take notice of all these trends then you can shape your editorial strategy to cater to the wants of South African audiences. Despite tough economic times, there are opportunities out there to take advantage of; it’s simply a case of identifying them and planning properly.