Reading, readers and readership: PRC all set to measure audiences 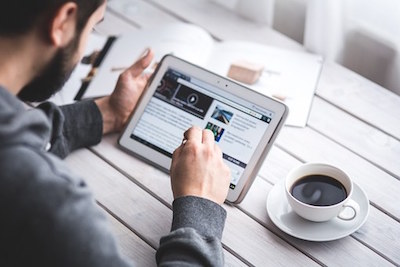 The difference between ‘reader research’ and ‘readership research’ (a term the Publisher Research Council has adopted) is “subtle but crucial”.

Research consultant to the PRC, Peter Langschmidt, says reading is “behavioural”, is “platform agnostic” and covers all forms of reading, from print to screens, unlike readership, which was “ink on fingers”. The PRC, he adds, understands the need to move away from simply measuring exposure to paper. Even PDFs will form part of the Publisher Audience Measurement Survey (PAMS) research.

The distinction, Langschmidt says, will provide media owners, agencies and marketers with the most accurate research they’ve had in over 40 years, the results of which will be announced in the PAMS in October. “We will offer agencies and clients audiences to each platforms individually and an unduplicated aggregated audience,” he says. PAMS results will also be fused with the Establishment Survey (ES) which in turn is linked to TAMS and RAM.

“AMPS provided us with very ‘enthusiastic’ readership figures,” Langschmidt says. “Although we do not know what the new PAMS methodology will deliver, it has been designed to address the high Readers per Copy (RPC) figures that were in AMPS. The PRC and its members are fully aware that ‘readership’ figures may show a decline but, whatever the new data reflects, it will be a more accurate reflection of the truth,” he says.

The PRC, he told The Media Online, has developed what is referred to as a “Reader Universe that represents the top 60% of the population where newspapers and magazines are distributed”.

Langschmidt says PAMS is introducing “a world first reading research flooding methodology”. This will comprise 10 000 core face-to-face interviews supplemented by 10 000 “flooded” interviews with other household members. This combined sample of 20 000, will be larger than the AMPS reader sample.

“Flooding allows for the interviewing of more than one respondent in a household,” Langschmidt explains. “This boosts the sample size at minimal extra cost because a large percentage of costs is transport and four visits back to the household to find the person. It is also apt in relation to the title’s reader journey within the home. In-home pass-along reading is an inherent property of the medium’s audience delivery.” 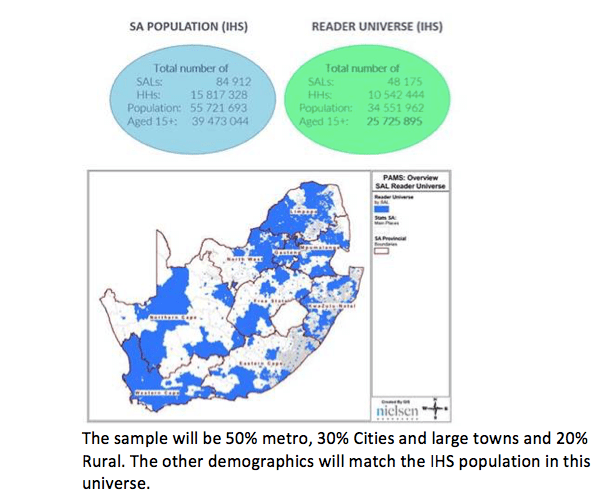 In order to provide quality data to inform effective advertising investment, the sample is designed around the reader universe, which up weights urban areas and down weights rural ones. This top 60% of the market accounts for over 85% of consumer and advertising spend. “It’s not just all about the numbers when planning an advertising campaign. It’s the ability of the written word, on any platform, to deliver a quality reader and the ability for said reader to recall what’s been read and advertised,” says Langschmidt.

The PAMS isn’t the only research the PRC is involved in. It will be involved in the Media Synergy study which combines Nielsen Adex data with the GFK consumer scanner panel purchases of 3000 representative South African shoppers. “This proves the incremental ROI advertisers derive from increased sales as a result of including print on their media plan,” says Langschmidt.

Then there’s the WhyFive BrandMapp research, which “examines top end title reading as well as perceptions of Print vs other media”.

Media View by TNS Kantar is a 2 000 sample national metro study that examines the strengths and perceptions of reading (print and online) vs watching (TV), listening (radio) and glancing (outdoor). And finally, they are setting up a PRC Panel, which Langschmidt explains is a “mobile reader panel of 16 000 members in 2017 with a sample that matches PAMS in all respects. It will also be South Africa’s first ‘near random’ online panel”.

PAMS results will be fused with the Establishment Survey (ES) which in turn is linked to TAMS and RAM. “This will provide media planners with the ability to compare different media platforms and channels, for example Huisgenoot audiences with radio broadcaster 94.7 Highveld,” Langschmidt says. “As such, by the end of the year we will have what we previously had in AMPS, it will just be conducted in four discrete surveys that are combined after the fact, which is in line with global best practice.”