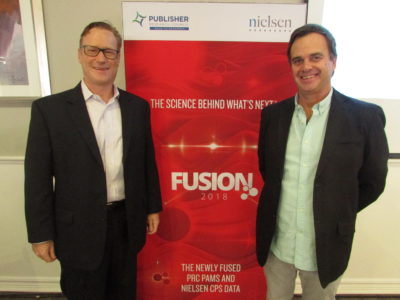 It is called Fusion 2018 and it brings together the PRC’s PAMS research with a portion of Nielsen’s CPS data, in a research technique called fusion (as opposed to single source data).

Peter Langschmidt, consultant to the PRC opened proceedings to a packed room, explaining that many major creations in the universe are due to fusion. “For 40 years, everybody in the South African media has believed in single source and AMPS,” he added. “But here at the bottom tip of Africa we’re trapped in a paradigm. While we believe in that, the rest of the world has been fusing since the late ’80s and Nielsen has been fusing since 1994.”

Research guru Jos Kuper joined the conversation from London. “The most important thing to realise is that the world is not the same as it was 40 to 50 years ago, when AMPS was the gold standard. There’s a new gold standard. Fusion today is a much more successful and wonderful technique than it was six years ago when we were looking what to do,” she said.

“This is a really interesting, dynamic time, and this is a moment for us as a company and for South Africa as a media market, because we’re doing something new, and new means change, which can be difficult,” he said.

Fusion is about taking two or more different data sets and putting them together to create something that is bigger than the sum of its parts.

Single source is still relevant, but its role has changed

Panels, diaries and surveys were the backbone of market research for the better part of the 20th century. But consumer behaviour and the world we live in has changed.

“Single source is very focused on the information that it gathers and that creates a problem. We’re putting a burden on individual respondents because it’s difficult to remember what you’ve done. We have choices now and choices are hard to measure because you have to account for every simple permeation and combination of behaviour and actions,”  Wells explained.

This led to the need for more research questions, but consumers don’t have time to answer these, and the quality of their answers eroded.

Wells stressed that single source data sets were still relevant and important, “but their role in the world and in research is starting to change… They no longer standalone, but are integrated because of fragmentation.

“Fusion is cheaper, easier to put together, reduces the burden on respondents and it allows for the capture of information at the respondent level,” he concluded.

Langschmidt then returned to the podium to go through some of the data. “The diaries are not worth the paper they are written on,” he said. “It’s claimed purchases, based on fallible memory, only one household respondent fills it in (when everyone in the household is buying), and people leave filling them in till the last minute.”

Langschmidt then showed some of the numbers coming out of the research, linking the SEM super groups to the data.

“When advertising, look at how many brands consumers buy on average, (as well as across the different SEM super groups) and the number of purchase incidences,” advised Langschmidt.

“You also have to look at the profile of how each SEM group adds up to the total number of sales,” he added.

Langschmidt called for more regular fusions, having seen the “launch of fusion 101 in South Africa”, at least six monthly or quarterly fusions.

The first data from the new fused research was released on Telmar.

Nielsen’s CPS research has been present in South Africa for many years, covering 4 000 homes.