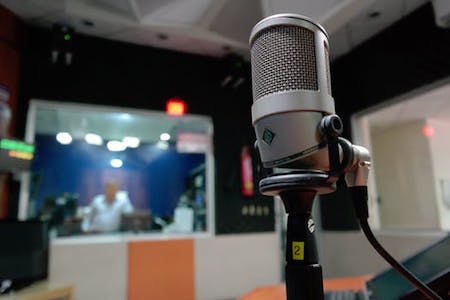 With an impressive national reach, and seven and a half years of experience under its belt, Ultimate Media makes non-traditional radio advertising easy.

“Increasingly, clients no longer simply want a 30 second radio advert. Yes, they need to have them for reach, frequency, price and product, but they want to stand out and not just be another 30 second advert on the radio,” explains Simon Parkinson, director of Ultimate Media.

This is where non-traditional radio advertising comes in, including competitions, content, takeovers and influencer marketing, all enhanced by social media integration and sometimes activations.

Parkinson utilises building a house as an analogy to explain how the radio advertising campaign works and who all the players are. The media agency is the architect (the ones who will be planning the house), the creative agency is the interior decorator (making the house look great), and Ultimate Media is the builder.

On camera, Parkinson touched on the state of South African radio, the challenges the sector is facing, and how he believes agencies should be approaching radio advertising.

A benefit for clients of Ultimate Media’s business is that there is only a once off project management fee, no other costs. The client is not charged until the campaign is agreed upon and signed off, therefore promotions can be brainstormed without financial commitment.

Everything Ultimate Media does is driven by a key strategy: delivering results for clients sometimes on one or two stations and often over multiple ones, with the same key messaging, in a seamless and effortless manner.

When it comes to content generation, instead of creating content first and then trying to find a brand to associate with it (which is what radio stations do), Ultimate Media sits with the client to gain a better understanding of the products and services they offer, their unique selling points (USPs) and how consumers utilise them. They then generate content around that and match it with the appropriate station/stations.

“Content creation is bespoke for each client, and there’s no one size fits all. It all depends on the USPs,” comments Parkinson. One week standard shelf campaigns are becoming less the norm and Ultimate Media, with stations, is creating bespoke radio solutions.

During the course of their campaign, Ultimate Media stays in close contact with the client and, since radio is an immediate medium, makes changes throughout, rather than reviewing at the end. This leads to clients achieving their desired needs (be it lead generation, an increase in sales, engagement through clicks and likes etc.) more frequently.

The company has an impressive national reach, working with every commercial radio station in the country and many of the community ones. For example, a Coca-Cola campaign was flighted across 27 stations.

Asked about the power of community stations and what they offer, Parkinson says, “Listeners don’t differentiate between national, ALS, commercial or community stations. They just say, ‘that’s one of my stations’, regardless of what they are defined as. They allow smaller advertisers, with not a lot of budget, to speak to a more niche market.”

The trend with 30 second spots is that brands still choose stations that have larger listener numbers. But Parkinson stresses, “Radio should be measured as a collaborative effort. Overlaying digital data with on-air activity.”

Parkinson believes that a USP for radio stations are the on-air talent. Ultimate Media incorporates them into some marketing campaigns through influencer marketing, depending on the client wants and whether the influencer is relevant to the campaign.

He stresses that further conversations on social media broaden the reach of the campaign. Tests that the company has done show that engagement rates are higher when a presenter is incorporated into a campaign.

Unlocking the potential of the SABC

There is enormous untapped potential at the SABC, a business Ultimate Media works with closely.

“The ALS stations are massive with vibrant, engaging audiences; their challenges include educating clients and marketers on the details of each station, and in particular in managing NTR campaigns which require a lot of co-ordination and communication. Ultimate Media is well poised to conceptualise and present converged campaigns to clients, and then to manage the process at first hand in order to get maximum value for clients,” says Parkinson.

For instance, Ultimate Media handles prize fulfilment and distribution, which the SABC does not.

Who is the real competition?

Believing that radio stations have over the years seen other radio stations as the competition, Parkinson stresses that now there is new competition, “Stations fighting other stations for sales is always going to happen. But now digital has come along and is eating away at the pie. … Stations should be saying, ‘digital is our major opposition, and to an extent print, and television’ and should be working closer with digital and creative agencies to say ‘how can we work together’.”

He adds that juniorisation in radio stations has been taking place and that “radio sales execs should no longer be selling, but listening to clients” and that “sales people need to demonstrate the value offered and how radio can complement other channels”.

Where it came from

The company was founded by the sales and promotions managers of Primedia Cape Town, who decided to go out on their own, having spotted a gap in the market for radio specialists.

“You had clients with multiple agencies and radio stations to work with, and to have someone who is a one-stop-shop that you can go to for ease of convenience was always going to be easier for the client, especially with the more fragmentation and options that came into the market,” explains Parkinson.

The business will continue to strive to be the go-to company and authority for non-traditional radio advertising. Its 23 staff are all radio people, and the aim is to expand into conducting more workshops.

“We want to be the evangelists for radio with digital and social media. We believe that it’s not one or the other. Multiple channels together will give you better results,” Parkinson concludes.