Posted By: Britta Reidon: May 18, 2021In: Newspapers
Print Email 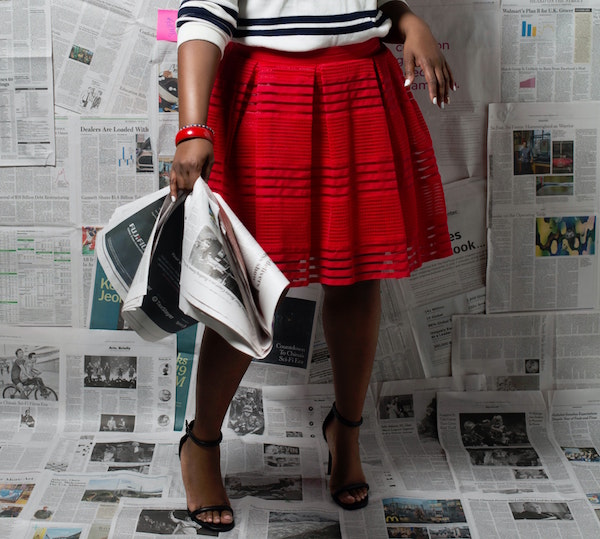 The bulk of local newspapers (97%) are based on the free subscription model, delivered directly to the reader’s home/Kelly Fournier/Unsplash

There is a sector of the newspaper market that deserves attention because its fortunes counter the dominant, doom-laden narrative about the demise of newspapers.

Over the past two decades, paid daily and weekend newspapers had a dire time of it: the combined circulation of the 18 top dailies halved and the top 15 weekly titles dropped by more than two-thirds.

Then the pandemic struck, curbing mobility, creating fear of contact and hurting pockets. The recent Audit Bureau of Circulations (ABC) figures for October to December 2020 starkly reflected this impact on newspaper sales: dailies dropped by 38.1%, weekends by 36.1% and weeklies by 45.7% over the previous year.

It is a gloomy picture, but it reflects only 22% of the newspaper market based on distribution, according to Robyn Bishop, head of marketing at Spark Media. In the second half of last year, she points out, an average of 4 812 788 local newspapers were still distributed regularly – 3.3 times the number of sold newspapers. Gareth Grant, business unit head at The MediaShop, opines that the good news story around local newspapers gets lost: the sales houses should take the opportunity to “make more of a song and dance about it”.

The bulk of local newspapers (97%) are based on the free subscription model, delivered directly to the reader’s home. Publishers have selected the communities they serve based on their economic attractiveness to advertisers, whose funding covers the costs of publishing, printing and distribution.

Accustomed to recalibrating distribution according to economic development, these publishers responded swiftly to Covid-19, discontinuing some titles, converting some paid titles to free, and amalgamating some titles to ensure that viable areas were still appropriately serviced. Though this pruning reduced overall distribution by some 13%, the total combined circulation of the remaining newspapers was reasonably stable, slipping by only 4.3%.

The largest newspaper in the country is now Taxi Times, with an ABC figure of 144 940. It is an anomaly in this category, being distributed free to taxi commuters rather than direct to home.

It is this free distribution that some media decision makers regard with caution. TBWA media manager Anastasia Taylor suggests that this might be the reason these titles are sometimes overlooked. If someone buys a title, they are likely to read it; if they are given one for free, she wonders if the motivation to read it is as strong. Richard Lord, media and operations director at Meta Media, concurs, saying they should be taken “with a pinch of salt”, as it means publishers are “handing out more papers, or adding new papers and areas”.

The major industry players have addressed this concern. Caxton has a long history of funding credible research to prove average issue readership of local print titles and provide consumer insights. Kantar conducts the ROOTS study among 27 553 purchase decision-makers in urban areas. Ads24 partnered with Caxton for the 2019 study, including 16 additional areas to cover their publications.

Bishop makes the point that the success of local newspapers is built on the still-relevant insight that South Africa is not homogenous but made up of a kaleidoscope of unique and different communities. These publications deliver relevant, hyper-local content that cannot be found anywhere else around service delivery, school news, community, social and sport events. They act as watchdogs on community issues. Their weekly delivery supports the way people live and shop – week to week.

Support in the pandemic

Grant argues that lockdown gave these local newspapers a new prominence for their fearful and working-from-home readers, who needed information about which businesses were operating and under what trading hours. These readers needed an antidote to fake news and were more comfortable with a delivered publication than a purchased one.

Local newspapers were also where people turned for support and reassurance: Tasmia Ismail, general manager commercial for Ads24 Media Solutions, cites the reactions of gratitude and relief that readers expressed in response to the PE Express’s headline: “Lockdown: You’re not alone, we’re in it together!”.

Irma Green, national group editor for Caxton Local Newspapers, recounts how they instantly had to find the best way to keep their communities informed during lockdown level 5, establishing a national task team to publish to their 57 websites, monitoring what readers were most worried about and turning their questions into informative stories, writing understandable ‘news-you-can-use’ articles.

Editors in the network of offices connected service organisations and aid schemes with families left destitute and without food. Local newspapers have continued to provide invaluable and appropriate support through the varying levels of lockdown.

Referring to ROOTS 2019, Bishop says that even before Covid-19, South African shoppers preferred to shop close to home, ideally travelling not more than 13 minutes for food and groceries. Shoppers also liked to plan their shopping, with 90% doing so – up from 78% in 2013.

Kantar’s Covid-19 Barometer testifies to both these habits being amplified during lockdown. A concern with price has been acerbated, with 72% of respondents saying they now pay more attention to it. These observations suggest that local newspapers have a heightened relevance for shoppers going forward.

Lord describes community papers as “almost the sole domain of the retail insert”, while Chris Botha, group managing director for Park Advertising, says, “they give advertisers real intensive coverage of a community with a leaflet”.

According to Nielsen’s January – December 2020 ad investment reading, local newspapers now take 43% of the newspaper investment vs sold dailies’ 41% and weeklies/weekends’ 16%. However, they currently garner 68.6% of their support from retailers – a category that constitutes 21.61% of total ad investment.

Britta Reid spent decades working for media agencies and owners across the fields of insight, strategy, implementation and leadership. Always a devoted mentor, she now relishes the opportunity to share her experience and views with curious media professionals through writing, training and consultation.